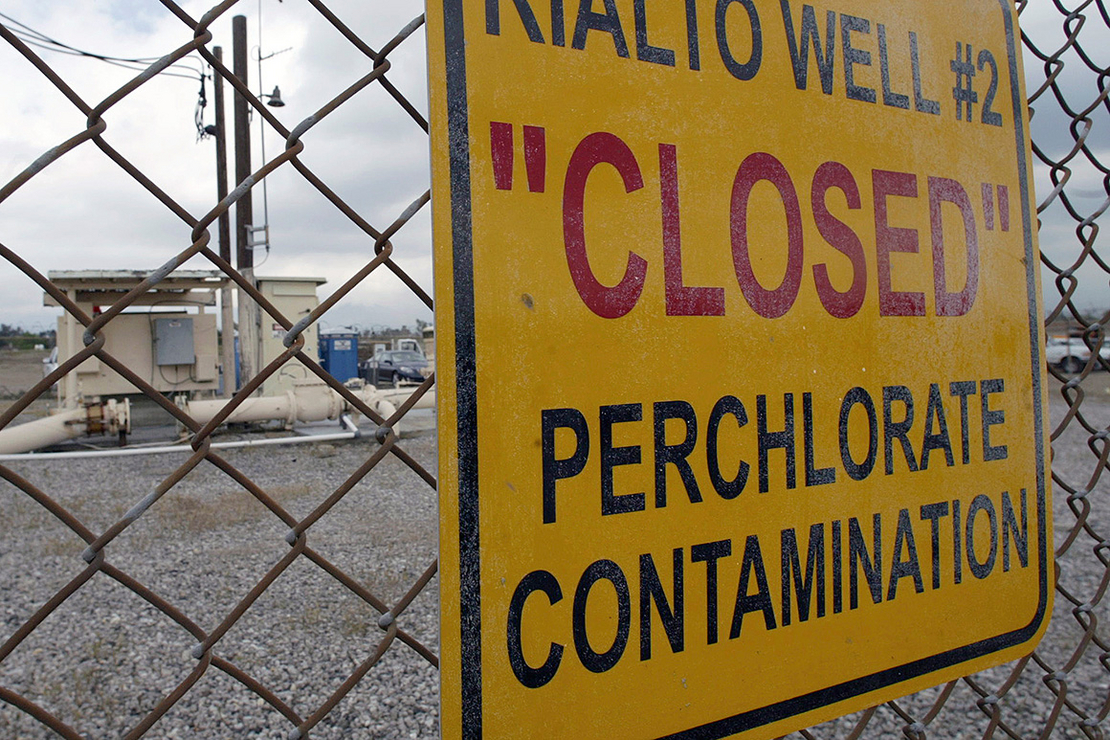 In this March 28, 2005, photo, a sign posted outside a water well indicates perchlorate contamination at a site in Rialto, Calif. Upholding a Trump-era environmental policy, EPA says it will not regulate the drinking water contaminant that has been linked to brain damage in infants. AP Photo/Ric Francis, File

EPA yesterday announced it would maintain a Trump-era position of not regulating toxic perchlorate in drinking water, infuriating public health and environmental advocates who have long sought federal limits on the contaminant.

EPA said it had conducted a review and concluded that a decision the agency made in 2020 to not regulate perchlorate — an ingredient of rocket fuel and fireworks tied to brain damage in infants — was based on the best available peer-reviewed science.

At the time, the agency said perchlorate was not found widely enough in drinking water or “at levels of public health concern” to require federal limits. The agency also said states and public water systems have already taken adequate steps to reduce exposure to the chemical through drinking water (Greenwire, June 18, 2020). The Biden administration announced last year it was reviewing EPA’s decision (Greenwire, Jan. 20, 2021).

Even so, studies show the toxin may be affecting millions of people through exposure to both contaminated drinking water and food. One 2016 study published in the medical journal Current Environmental Health Reports found that water systems serving 11 million people had perchlorate above detectable levels.

While holding off on federal regulations on perchlorate, EPA yesterday laid out actions it plans to take in a fact sheet, including studying perchlorate levels in ambient water following firework display events, continued cleanup of contaminated sites, and continued consideration of changes to federal law around the open burning and detonation of waste explosives and propellants. The agency also pointed to funding for cleanup in the $1.2 trillion infrastructure bill as supporting efforts to tackle emerging contaminants.

EPA’s assistant administrator for the Office of Water, Radhika Fox, in a statement said the agency is “taking action and applying the right tools to support public health protections,” noting that money under the Bipartisan infrastructure Law will allow for a new monitoring study, financial and technical tools, and cleanup of contaminated sites under the Superfund program.

Erik Olson, senior strategic director for health at the Natural Resources Defense Council, said in a statement that EPA’s failure to protect drinking water from perchlorate is ”unscientific, unlawful and unconscionable,” and that without EPA regulation, there is no federally required monitoring of tap water or requirement to inform a community of contamination.

“The Trump EPA gave perchlorate a pass; it was a bad decision then, and it’s a bad decision now,” said Olson. “Tap water across America will remain contaminated by this toxic chemical, which threatens the brain development of babies in the womb, infants, and young children at extremely low levels.”

NRDC has repeatedly sued EPA for failing to regulate perchlorate.

In 2020, the group sued the Trump EPA for rescinding the agency’s earlier decision to set a standard for perchlorate. NRDC also sued EPA during the Obama-era in 2016 after the agency decided to regulate the chemical in 2011 but missed statutory deadlines.

Olson in a statement reiterated that EPA under the Trump administration relied on a “deeply flawed analysis” to select a “safe” perchlorate level that is 10 or more times higher than health-based limits set by state authorities who have evaluated the same data. He also said there’s been little monitoring in recent years, leaving gaps in knowledge regarding how many people are being exposed to perchlorate.

“EPA then compared levels of perchlorate in tap water to their unjustifiably high ‘safe’ levels and said there are not a lot of systems exceeding safe levels, so there is no need for regulation of perchlorate,” said Olson. “The agency relied primarily upon a two decade-old EPA snapshot of perchlorate levels in tap water and ignored other more recent data from [the U.S. Geological Survey] and others showing widespread perchlorate contamination.”

Olson told E&E News that the group’s litigation against EPA will now restart to compel the agency to set standards.