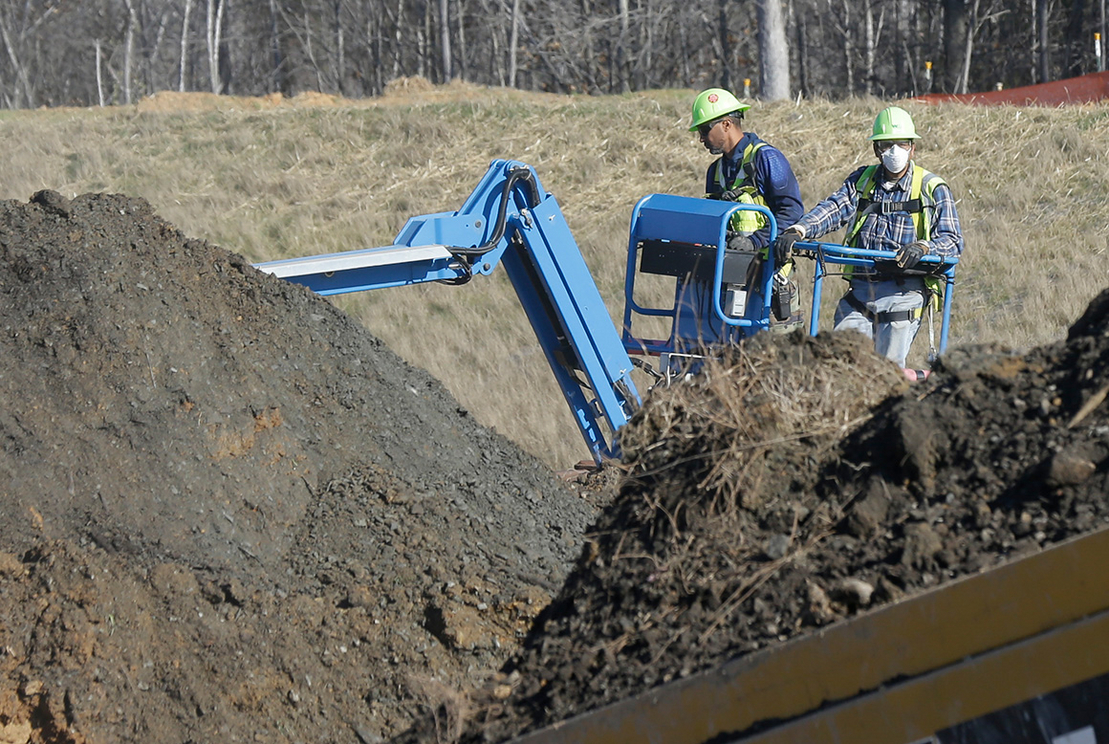 In this 2016 photo, workers excavate coal ash-laden soil to be removed from the Dan River Steam Station in Eden, N.C. AP Photo/Gerry Broome

EPA today took its first steps to ramp up oversight of toxic coal ash following a Trump-era rollback, a move that threatens early retirement for some coal plants in the Midwest.

Advocates who have pushed EPA for years to take stronger regulatory action to clamp down on coal ash — one of the largest sources of water contamination in the country — said EPA’s interpretation of the law could set a precedent and put more pressure on utilities to more effectively clean up impoundments holding toxic sludge at hundreds of sites across the nation.

“This appears to be the first crackdown on coal plants since the rule was published in 2015,” said Lisa Evans, an attorney with Earthjustice. “EPA no longer appears to be turning a blind eye to noncompliance at coal plants.”

“I’ve seen firsthand how coal ash contamination can hurt people and communities,” Regan said. “Coal ash surface impoundments and landfills must operate and close in a manner that protects public health and the environment.”

House Energy and Commerce Committee Chair Frank Pallone (D-N.J.) applauded EPA’s plans, saying, “Nowhere is this news more welcome than in our environmental justice communities, who have borne the brunt of exposure and deserve immediate remediation. I join them in celebrating this action and look forward to continuing to work with the Biden EPA to eliminate toxic coal ash exposure once and for all.”

EPA proposed to give one coal plant — the Hugh L. Spurlock Generating Station in Maysville, Ky. — the ability to store coal ash or residuals from combusting coal at an impoundment through Nov. 30, 2022. The plant was originally slated to stop placing coal ash into the ponds by April 2021 under existing law.

The agency today said Spurlock is eligible for the extension as long as the operator, the East Kentucky Power Cooperative, installs adequate groundwater monitoring controls at the disposal site.

This may lead the three plants to close prematurely. According to EPA, all three warned in their requests for extensions that they might have to cease operations if the requests weren’t granted.

The operators of all three plants could not immediately be reached for comment.

Evans, however, questioned the veracity of the plants’ assertions that they may have to shutter early without an extension under the coal ash rule. She noted that the Ottumwa facility, for example, had asked for an extension to continue receiving waste through the end of this year. But given the time EPA needs to consider comments, finalize its draft decision and then provide a period of more than four months before closure, the Ottumwa facility would only gain a few months of relief. In addition, EPA could authorize additional time for operation if closure raises grid reliability issues.

Four coal plants — the Dallman plant in Springfield, Ill.; the Erickson plant in Lansing, Mich.; the Meramec plant in St. Louis; and the Sioux plant in West Alton, Mo. — submitted applications with incomplete information required for EPA to make a decision on an extension.

Another former coal plant — the Greenidge facility in Dresden, N.Y. — was ineligible because the plant currently operates a natural gas boiler to mine for Bitcoin, and has not operated a coal-fired boiler for several years, EPA said.

Owners of the coal ash ponds had asked for an extension from complying with 2015 Obama-era regulations governing waste disposal from the sites under a lax process created under the Trump administration. The process, aimed at saving coal companies money and giving more time to comply with the rules, required companies to demonstrate that closing their ash ponds would be technically infeasible.

Fifty-seven coal plant operators across the Midwest and southern United States, out of about 500, asked EPA for more time to comply with the rule. Today’s announcement represents the agency’s first tranche of decisions on what to do with those applications.

Of the applications submitted, EPA said, the agency determined 52 applications were complete, four incomplete, and one ineligible for an extension. Furthermore, the agency said it’s proposing one conditional approval and three denials.

Environmental groups applauded EPA’s move today to enforce existing law and restate that surface impoundments and landfills can’t be closed if coal ash is in contact with groundwater, a widespread practice among utilities.

Frank Holleman, a senior attorney with the Southern Environmental Law Center, said that in many places, including Georgia, Alabama and Tennessee, utilities have proposed to cap sites and leave the ash in unlined lagoons sitting in groundwater forever, which he added is a violation of the existing coal ash rule. So far, Holleman said, state regulators for the most part have not stopped coal companies from moving forward in those states, but such federal guidance could change that.

“EPA’s statement calls into question plans by state regulatory agencies to allow ash to be left in groundwater,” he said.

Coal ash is often stored in earthen lagoons that can leak mercury, arsenic and other harmful substances into groundwater and nearby waterways.

A 2019 study from environmental groups showed that almost all of the nation’s existing coal plants with such ash ponds have contaminated surrounding groundwater with unsafe levels of toxins, including a known carcinogen, arsenic, and lithium, which is associated with neurological damage.

EPA today said it will announce decisions on the remaining requests for more time “as expeditiously as possible.”

The agency is also moving to bring coal plants into compliance, issuing letters to certain facilities about outstanding concerns, including improper groundwater monitoring, insufficient cleanup information and the regulation of inactive surface impoundments, according to EPA.

Four facilities were disclosed by the agency: the Beckjord power station near New Richmond, Ohio; the AES power plant in Puerto Rico; the former Tecumseh power plant in Tecumseh, Kan.; and the R. Gallagher Generating Station near New Albany, Ind., which operator Duke Energy shut down in June 2021.

“As the transition from coal advances. It is also critical that we responsibly manage the legacy wastes that have been left from our historical reliance on coal,” Liesl Clark, director of the Michigan Department of Environment, Great Lakes and Energy, said in a statement. “We support EPA’s ongoing efforts to provide clarity around the coal combustion residuals rules and to ensure that our world-class freshwater resources and the drinking water they provide are not impacted by these legacy wastes.”

The long and convoluted history of coal ash regulation reaches back to 2015, when the Obama administration unveiled the first federal regulations for coal combustion residuals, or coal ash.

At the time, the rule was aimed at preventing disasters like the Dan River coal ash spill in North Carolina and the spill in Kingston, Tenn., in 2008, when a billion gallons of coal ash sludge devastated 300 acres and dozens of homes.

In 2020, the Trump administration finalized a rule granting power plants more leniency in complying with the rule, giving them until April 2021 to stop adding more coal ash to storage sites that lack leak prevention or are not at least 5 feet from an aquifer (Greenwire, July 30, 2020).

The Trump administration defended the rule as a “cost savings” measure. The Obama-era rule initially gave unlined coal ash ponds until April 2019 to start closing, but that regulation was struck down by a federal court for being too weak. The U.S. Court of Appeals for the District of Columbia Circuit found that some parts of the 2015 regulations were too weak.

In addition to extending the deadline, the Trump-era rule also allowed power plants to continue operating unlined coal ash lagoons, which can contain harmful substances like mercury and arsenic, if they could demonstrate that they don’t harm human health or the environment.

EPA last year revealed it was moving forward with the Trump-era program, which it said was the “most environmentally protective course” despite criticism from environmentalists that the program created pathways for utilities to continue operating unlined coal ash impoundments (E&E News PM, July 9, 2021).

EPA today also reiterated that it plans to take further regulatory action, including improving the current rules by finalizing a federal permitting program for the disposal of coal ash and establishing regulations for legacy coal ash surface impoundments.

The Biden administration first revealed such a regulation was coming in its unified agenda last year (Greenwire, Dec. 31, 2021). Currently, Georgia, Texas and Oklahoma are the only states that have programs to govern the handling of coal ash.

EPA said it’s also continuing to review state-level coal ash program applications to ensure that they are “as protective as federal regulation.”