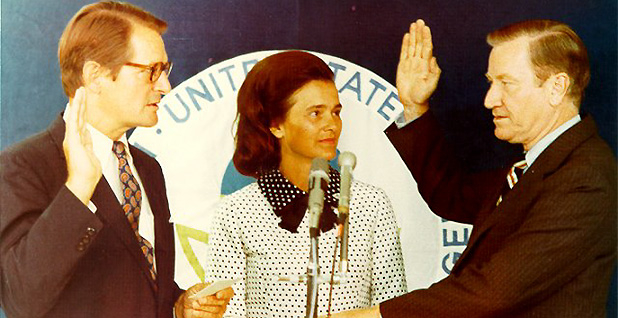 In September 1973, EPA Administrator Russell Train was sworn in by Attorney General Elliot Richardson, who later resigned after refusing President Nixon’s order to fire the Watergate special prosecutor as part of the "Saturday Night Massacre." EPA

Russell Train, EPA’s second administrator, thought it would be a good idea to be sworn in by the president.

But Richard Nixon, who at that time was under scrutiny over the Watergate scandal, offered a different opinion when the two discussed the job in the Oval Office.

"I assumed it probably would be a politically shrewd thing for me to be sworn in at EPA by the president. President Nixon was quite a bit shrewder politically than I," Train said in an oral history interview for EPA.

By 1973, with the fallout from a "third-rate burglary" beginning to overwhelm Nixon’s White House, the president’s imprimatur had been tarnished.

"He was in the middle of Watergate at that time, and said something like, ‘That could probably be just about the worst thing I could do for you,’" Train said.

"He was always extremely pragmatic about himself and his own value in politics (although I must say other events would not necessarily bear out the statement I just made)," Train added.

Instead, in September 1973, Train was sworn in by Elliot Richardson, then the attorney general.

About a month later, Richardson and his deputy attorney general, Bill Ruckelshaus, who had served as EPA’s first administrator, resigned in the "Saturday Night Massacre" after refusing Nixon’s order to oust the Watergate special prosecutor.

Nixon’s own tenure came to an end over the break-in at the Democratic National Committee headquarters in the Watergate complex. By August of the following year, Nixon resigned before the full House voted on articles of impeachment that had been approved by the Judiciary Committee.

Created by a Nixon executive order in 1970, EPA is now in its third round of presidential impeachment drama. But former senior EPA officials who served in the Nixon and Clinton administrations told E&E News they stayed out of the spotlight and focused on their work, not the scandal.

"It’s been spooky, the parallels that exist between Watergate and this current crisis," Ruckelshaus told E&E News. "Here I am again, listening to some of the same stories virtually that I experienced personally 40 years before."

During Nixon’s scandal, EPA officials tried not to be distracted.

"Our job was do the best we could at EPA," said Roger Strelow, who served as executive assistant to Train at EPA. "It was not like ‘Oh, my gosh, what’s going to happen to us?’ It was more like business as usual for us at EPA, even if the president is removed from office."

Strelow said he and Train gave little notice to the turmoil outside the agency. He remembers coming in early one morning into the administrator’s office at EPA after Vice President Spiro Agnew had resigned, over a tax evasion scandal unrelated to Watergate. Strelow took down Agnew’s portrait from the wall.

"I just walked in, took Agnew’s picture off the wall and put it in the waste basket. And then I went over to Russ and said, ‘What do we need to do this morning?’ We both just sort of grinned and went about our business," said Strelow, who later served as EPA assistant administrator for air and waste management and is now a consultant in the private sector.

Strelow remembers doing the same with Nixon’s portrait at EPA.

"Well, I remember saying, ‘I guess this one should hit the waste basket as well,’ and [Train] chuckled and went on with business," Strelow said. "There was a little sadness to that chuckle because Nixon was a great supporter of the agency, and it was his initiative to create it."

Train continued serving as EPA administrator during President Ford’s time in office. He died in 2012.

Ruckelshaus said Nixon was distracted by the scandal, much to the detriment of the federal government.

"He wasn’t focused so much on the Watergate as he was on his own survival, that it absolutely dominated his administration for almost two years," Ruckelshaus said.

"My own belief is we’ve never recovered from that as a society. We’re still struggling to make sure that we make the right kind of laws that move things like the environment along so that we’re continuing to make progress."

Browner: ‘I wanted to stay focused on my job’

In December 1998, the House voted to impeach him over perjury and obstruction of justice related to his extramarital affair with White House intern Monica Lewinsky. The Senate, however, acquitted Clinton in a February 1999 vote after a trial.

Clinton had pushed back on the allegations when they first broke. Carol Browner, who served as EPA administrator from 1993 to 2001, remembers a Cabinet meeting during which the president denied having an affair with Lewinsky. She chose not to talk to reporters after that meeting, unlike other female members of Clinton’s Cabinet who defended the president.

"I consciously chose not to participate in the stakeout. I had a view that women don’t really lie about this stuff," Browner said. "I wanted to stay focused on my job."

Clinton’s second term was eventful enough for EPA. The agency moved forward on significant regulations cutting down on ozone and particulate matter as well as setting clean diesel fuel standards — all the while under threat from House Republicans.

"The Gingrich assault and EPA was much bigger than all of this," Browner said, referring to former House Speaker Newt Gingrich (R-Ga.). "It was a pretty big assault on EPA, and the fact they survived energized people, and we went on from there."

Browner said the message she received from the White House at the time was to stay focused on the task at hand.

"Clinton’s White House took a view, ‘Do your job. Just stay out there and do your job,’" she said. "I just kept my head down and did my job."

But Peter Robertson, who served as EPA’s acting deputy administrator around the time of Clinton’s impeachment, said anxiety among the agency’s political staff would wax and wane based on the news of the day.

"I remember people worrying whether there was a resignation of a president imminent," said Robertson, now senior vice president for corporate affairs for the Pebble Partnership, the company behind the Pebble Mine project in southwest Alaska.

But while Clinton’s impeachment proved to be fodder for water cooler talk, it did not stall the agency.

"Was it the subject of hallway conversations? Yes, but we were focused on getting the work of the agency done. Did it consume us? No," Robertson said.

Others agreed with that assessment.

"I remember no consternation or delay or distraction to whatever was going on with the impeachment," said Bob Perciasepe, who was head of EPA’s air office at the time. "In terms of our work, OMB didn’t slow down, other agencies we were working with didn’t slow down. There was no seizing up of the government."

Like Clinton’s, Nixon’s stumbles drew gasps from his political appointees as well. William Reilly, the former EPA administrator under President George H.W. Bush who previously was a senior staff member to Train when he ran the White House Council on Environmental Quality, recalled his old boss’s reaction.

"When news of the Watergate broke, Train said this whole thing smells of Colson," said Reilly, referring to Charles Colson, a Nixon White House aide later indicted as part of the scandal. "So he surmised it right away."

Ruckelshaus, as EPA administrator, developed a close working relationship with Train when he was at CEQ. The two stayed in touch when Ruckelshaus left the agency, with Train inquiring about Watergate.

"It was absolutely impossible not to be interested in this if you were a part of Nixon’s Cabinet, which Train not only was," Ruckelshaus said, adding those high-level officials wanted to admire and support the president.

"When that’s hard to do because of his actions and the way he handles himself, it’s very disappointing. So for anybody in the administration, even those of his strongest supporters, they would be concerned over this, continue to think about it and be impacted themselves personally by the Watergate."

Ruckelshaus said his leaving the Justice Department as part of the "Saturday Night Massacre" was "a fairly simple decision" for him. Nixon’s requesting that he fire the special prosecutor who had been investigating the Watergate scandal was inappropriate, he said.

"You can’t do it. That’s not the way this country works. That’s not a democracy. You don’t decide which laws you’re going to enforce and which ones you’re not," Ruckelshaus said. "And if he specifically asked you to do something he’s not supposed to do, then you don’t do it."

Like some of his predecessors, EPA Administrator Andrew Wheeler now will have to deal with the impeachment process.

Wheeler has taken a similar tack on impeachment. Though he has defended Trump, Wheeler says he is concentrating on his agency.

"I’m focused on the EPA and what we’re doing. I’m sure that the president will be vindicated," Wheeler told reporters earlier this week when asked about the impeachment inquiry.

He added, "They started this process before he actually was elected. And they’ve been trying to figure out a way of doing that from the very beginning, but I’m sure he’ll be vindicated as he has of all the other charges."

Others in the Trump administration have come under scrutiny for their involvement in Ukraine. Energy Secretary Rick Perry has been named in subpoenas related to the impeachment inquiry, although he has not been subpoenaed himself (Energywire, Oct. 2).

Asked what advice he could offer to the current administrator, Reilly said to keep the agency out of politics. EPA has been accused of that recently in its aggressive approach toward California — threatening to withhold highway funds from the state over poor air quality, blocking it from setting tougher greenhouse gas emission standards for cars, and issuing a notice of violation to San Francisco over wastewater treatment (see related story).

"Keep your head down and resist mightily proposals that would make your agency an instrument for politics, which it has become with respect to California and automobile fuel efficiency," Reilly said.

Jim Barnes, who served as chief of staff under Ruckelshaus, said the agency may have more leeway for its regulatory rollbacks as Trump’s impeachment process draws eyeballs instead.

"I’m not sure that’s going to cause the political appointees at EPA to do anything differently, and it may even give them more cover to do what they are doing," said Barnes, noting EPA’s actions may be given less coverage now as press and public attention focus on the debate on Capitol Hill.

"Given something that might have showed up on the front page of The New York Times, it is going to be less likely to do so now," said Barnes, currently an environmental law professor at Indiana University.

Perciasepe said Clinton compartmentalized his personal issues, which helped insulate the rest of the federal government at the time of his impeachment. In contrast, Trump is beset by his inquiry and could draw in agencies outside the White House, particularly the Justice and State departments, though not necessarily EPA, he said.

"While we can’t predict what will happen this time, if you follow what’s being said on Twitter, someone seems obsessed with what’s going on," said Perciasepe, who later served as deputy EPA administrator during the Obama administration and is now president of the Center for Climate and Energy Solutions.

"The president himself is wildly distracted. Whether that is different from normal operations, time will tell."