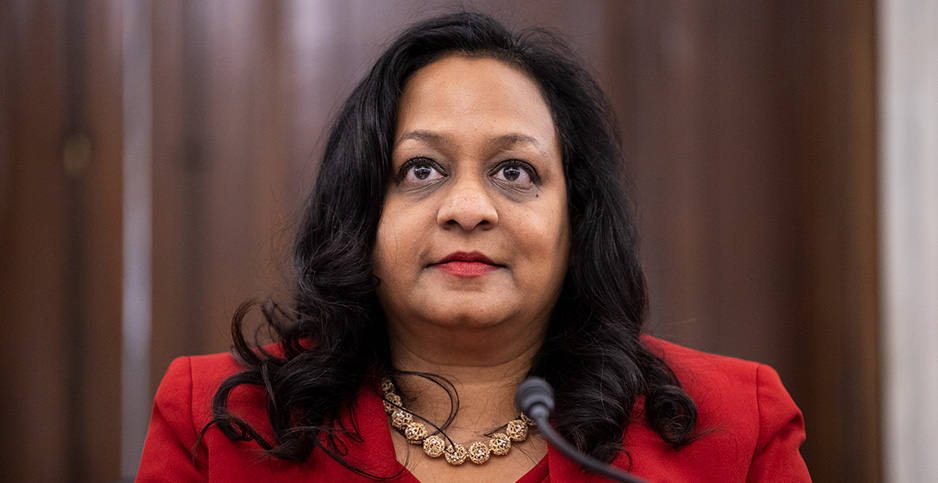 EPA Assistant Administrator for Water Radhika Fox during her confirmation hearing on Capitol Hill in May. Francis Chung/E&E News

The newly confirmed head of EPA’s Office of Water lived with her grandmother while her parents finished their medical training in New York City.

"When the monsoon season came, the roads flooded because they were mud," Fox said in a recent interview. "At least our little village was an oasis unto its own."

Fox said it’s an "incredible dream and honor" to serve as the first woman of color in the role of assistant administrator at EPA’s Office of Water after such "humble beginnings."

Fox is a well-known name in water and equity circles. After earning a master’s degree in city and regional planning from the University of California, Berkeley, she spent a decade as the federal policy director at PolicyLink, a nonprofit based in Oakland, Calif., focused on policies affecting low-income communities and communities of color.

The San Francisco Public Utilities Commission, the first utility in the nation to adopt a community benefits and environmental justice policy, recruited her in 2011 to serve as director of policy and government affairs. She went on to serve as CEO of the U.S. Water Alliance from 2015 to 2021 before jumping to EPA.

Under Fox’s leadership, the Office of Water is heading into a busy summer revamping a contentious Trump-era Clean Water Act rule and tackling environmental justice and contaminants like per- and polyfluoroalkyl substances (PFAS), or "forever chemicals," all while beefing up an office that was shrunk under the previous administration.

Fox talked to E&E News about her agenda and the role of the Office of Water in meeting President Biden’s climate and environmental justice goals:

EPA has said it will scrap the Trump-era Navigable Waters Protection Rule. What’s your timeline?

We are moving quickly. Very imminently, I would say, we are going to be announcing our framework, or a two-step rulemaking process. We want to share that framework so that we’re being very transparent with all stakeholders around how they engage in such a critical rule.

We intend to restore the pre-2015 regulation defining Waters of the United States, or WOTUS. Because we think it is important to get the Navigable Waters Protection Rule off the books. Then we will do a second rule that will learn from the pre-2015 regime, the 2015 Clean Water Rule, the 2020 rule, and really develop what we hope will be a durable definition of [WOTUS] because it is so essential to the effective implementation of the Clean Water Act by us, by states, by tribes, by local governments.

When is the two-step rule coming?

House Democrats have expressed concern about wetlands and streams being damaged while the Trump rule remains in place. How do you respond?

There are over 300 projects that, because certain waters are now not jurisdictional, have the ability to move forward without a permit. Without the ability to really assess the potential water quality impacts on wetlands, on streams, on a range of things, that is concerning to us. We need a rule that is durable, that balances the protection of our water resources with the kind of certainty and clarity that people, all kinds of stakeholders need.

I would also say there are multiple lawsuits currently underway around the Navigable Waters Protection Rule, and that is not, in my view, something that’s sustainable or durable. We need a rule that’s legally defensible.

You co-run the PFAS council. What will be your first major course of action? How far are you on an overall strategy?

We’re in the process of developing a road map for the next four years, with the goal of accelerating the scientific work, the regulatory actions and approaches including funding to help us address PFAS contamination.

We’re focused on what’s the research agenda; we’re also really thinking about actions that help us restrict PFAS from getting into our air, land and water in the first place. And then, of course, many communities struggle with PFAS contamination. So we also want to be accelerating the ways in which we use our authority to remediate PFAS.

Biden’s budget would boost EPA staffing. What does that mean for the Office of Water?

I don’t have details on specifically what the allocation of potential additional [full-time positions] would be to the Office of Water. But the focus would be to really invest in rebuilding the career staff so that we have the resources needed to do the science that we will ground our regulatory rulemaking in.

Fingers crossed that that budget makes it through the congressional process.

Did the loss of staff affect the office’s effectiveness?

No. I joined a really incredible team on Jan. 20. And I would say that the career staff remain so committed to the essential mission of protecting public health in the environment.

I don’t think it has impacted our effectiveness. But I also think that with additional staff capacity, we’ll be able to take on more, move more quickly on some of the big priorities that the administration has around water infrastructure, investment and other things.

How is the office fulfilling Biden’s environmental justice goals in the near and long term?

Environmental justice is being prioritized right at the top, and Administrator [Michael] Regan has given us incredible guidance around really asking each of his assistant administrators to think about the ways in which we can utilize our regulation, our funding and financing programs, our voluntary partnerships, to advance environmental justice issues, and to really directly address the ways in which low-income people and communities of color have been disproportionately impacted by the choices we’ve historically made.

We have an administrationwide equity assessment process that is underway. And then within the Office of Water, we’re really taking a careful look at the incredible funding and financing programs we have. We’re doing community roundtables around the Lead and Copper Rule because we know historically that we haven’t really considered enough the way in which that rule impacts people of color.

Does the office have an environmental justice adviser?

We have a couple of staff that are dedicated to that. And, you know, the president’s fiscal 2022 budget calls for increased investment in environmental justice, funding and staffing across the EPA, including the Office of Water. And then, of course in the American Jobs Plan and the bipartisan infrastructure framework, there would be resources really dedicated to delivering on any of the plans and priorities the agencies are in the process of developing.

As we’re developing our environmental justice plan, they’re looking at our current grant programs and the ways in which they’re incorporating equity and environmental justice consideration. They’re also working very closely with the Office of Environmental Justice, which is in the administrator’s office coordinating on a range of things.

Where does the water office fit into achieving the president’s ambitious climate goals?

The president and the White House are calling for us to take a whole-of-government approach to addressing the climate crisis. We’re still early in administration, and we’re really working through what that will look like.

We’re going to be updating the climate adaptation plans that we have in the Office of Water.

The Office of Water has a range of existing programs and voluntary partnerships that are focused on climate resilience, on flooding, on a range of challenges that water systems face. In the latest round of [Water Infrastructure Finance and Innovation Act] loans, we have made climate resilience a priority.

What we’re now doing is looking at those things and saying, "How can it be accelerated? How can they be leveraged differently to get better outcomes?"