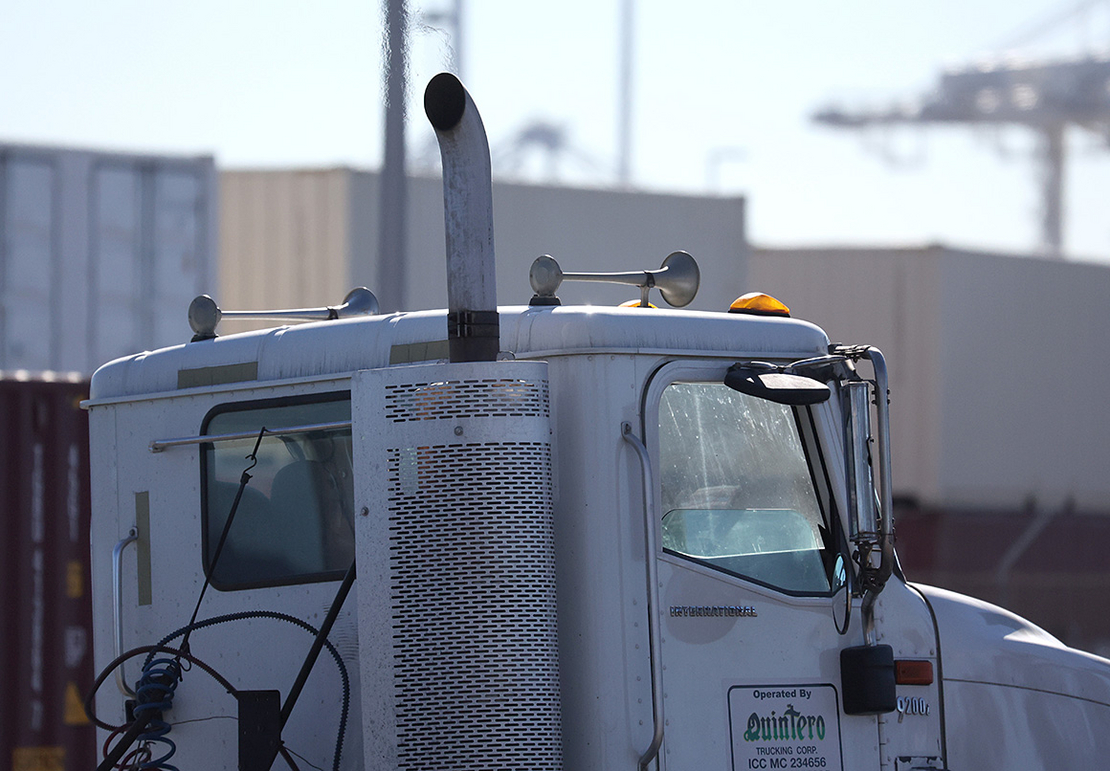 A truck emits exhaust while driving through the Port of Oakland on Feb. 16 in Oakland, Calif. Justin Sullivan/Getty Images

At a White House ceremony yesterday, EPA Administrator Michael Regan hailed a planned tightening of heavy-duty truck emission standards as a step toward slashing smog-forming pollution on the road and ushering in even cleaner alternatives (Greenwire, March 7).

Almost immediately, however, the agency was buffeted by competing calls either to proceed more cautiously or act more aggressively.

“EPA’s New Trucks Rule Fails to Deliver” was the title of an Earthjustice news release urging the agency to push the trucking industry toward electric rigs.

“For the sake of our lungs, our health and our climate, the future of trucking in this country has got to be zero emissions,” said Paul Cort, director of the group’s “Right to Zero” campaign. Pressing a similar point was the American Council for an Energy-Efficient Economy, which focused on the importance of cutting greenhouse gas emissions. “The plan today doesn’t take advantage of the dramatic advances in electric trucks, and EPA will need to strengthen it to accelerate the transition while maintaining progress on conventional vehicles,” senior transportation researcher Avi Mersky said in a separate release. “We can’t leave tools on the table.”

But at the Diesel Technology Forum, a trade group whose members include engine manufacturers, Executive Director Allen Schaeffer suggested that moving too quickly on the electrification front could lead truckers to hold on to older, higher-polluting vehicles longer.

It “is vitally important that EPA get this right,” Schaeffer said. “The right rule will enable further improvements in diesel technology and continued investments in new vehicles that will be important to sustain progress toward meeting both clean air and climate goals.”

Under the newly issued proposal, EPA is floating two options to cut heavy-duty trucks’ releases of smog-forming nitrogen oxides (NOx). The first would take a two-stage approach by successively tightening standards for model year 2027 vehicles and again for the 2031 models. The second would make a one-time tightening only, starting in model year 2027. While both approaches would slash emissions in the long term, EPA expects that the first would chop them by more than 60 percent by 2045 in comparison with what they would otherwise have been. The second option would cut NOx releases by 47 percent, according to estimates in the draft rule.

While EPA staffers plan to take public feedback on both alternatives, “we currently believe that Option 1 may be a more appropriate level of stringency as it would result in a greater level of achievable emission reduction for the model years proposed,” they wrote in the draft.

The agency last strengthened NOx limits for new tractor-trailers and other heavy-duty trucks a generation ago in 2001. It now hopes to have the new standards in place by the end of this year. A driving force is the need to help states meet the agency’s latest ground-level ozone standard of 70 parts per billion. Ozone, the main ingredient in smog, is linked to asthma attacks in children and other respiratory problems.

More than 122 million people live in areas that are flunking the 70-ppb limit, the proposed rule notes.

“Many of these areas have implemented controls on everything that it’s in their power to control, and many of these areas have significant contributions to their air pollution coming from these heavy-duty trucks,” Miles Keogh, executive director of the National Association of Clean Air Agencies, said in an interview. The association’s members include the bulk of state and local air regulators; they would like to see EPA fully put the Option 1 emissions standards in place for model year 2027 trucks instead of waiting until 2031. That step, Keogh indicated in a statement, would put federal regulations on par with those already adopted by California by requiring a 90 percent reduction cut in the current standards for NOx emissions from new trucks.

Regan and other Biden administration officials unveiled the draft in tandem with steps to spur the purchase of electric transit buses and school buses.

On Capitol Hill, lawmakers’ reaction was muted. In a statement, for example, Senate Environment and Public Works Chair Tom Carper (D-Del.) did not directly mention the proposed truck standards but praised the investments “in cleaning up our dirtiest engines in the transportation sector … as a boon for our country and the planet.”