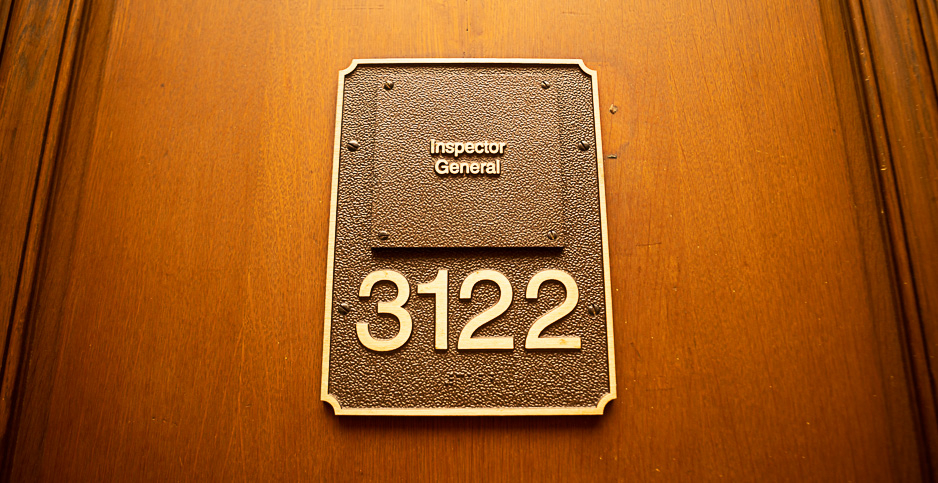 A sign on the door of EPA's Office of Inspector General. Francis Chung/E&E News

EPA’s internal watchdog is planning to conduct dozens of audits over the coming year, including several centered on the agency’s handling of climate change and environmental justice.

The EPA Office of Inspector General today released its oversight plan for the 2022 fiscal year. All probes are designed to address the agency’s most pressing problems as it looks to protect human health and the environment.

The plan "reflects the priority work that the OIG believes is necessary to keep the EPA, the [Chemical Safety and Hazard Investigation Board], and Congress fully informed about issues relating to the administration of Agency programs and operations," EPA IG Sean O’Donnell said in a message accompanying the report.

Overall, the oversight plan lists 67 projects focused on EPA, including 42 that are planned to be conducted during the fiscal year.

On climate change, the IG office lists two planned audits: one on determining whether grants to replace school buses under the Diesel Emissions Reduction Act addressed climate change, and the other on whether EPA has ensured upgrades to water infrastructure have built resilience against climate change.

The watchdog is planning several reviews dealing with environmental justice, including an audit of EPA’s benzene fence-line monitoring at refineries, the agency’s oversight of drinking water at prisons, and whether EPA distributed funds from the Covid-19 relief package to address "disproportionate environmental or public health harms and risks" in communities of color and low income.

The inspector general will also evaluate whether EPA has made progress on its 2018 action plan on children’s exposure to lead and dig into whether relocations from Superfund sites have been "fairly applied" to environmental justice communities.

In addition, EPA’s watchdog is planning to review whether the agency followed policies and procedures on its rule on long-chain perfluoroalkyl carboxylate and perfluoroalkyl sulfonate chemicals. The office already has an ongoing review of EPA’s perfluorobutane sulfonic acid toxicity assessment. Both were released during the Trump administration.

Further, the IG office plans to look into how EPA is handling new chemical risk assessments under the Toxic Substances Control Act as well as why EPA has not set a mandatory limit for per- and polyfluoroalkyl substances, or PFAS, in drinking water.

O’Donnell testified before Congress last week on PFAS contamination, in his role both as EPA IG and as acting IG for the Department of Defense (Greenwire, Dec. 10).

The IG office also has projects planned delving into EPA’s enforcement of environmental laws, including on compliance monitoring for air and water pollution as well as dealing with contamination and inspection of toxic waste sites.

In his message included with the oversight plan, O’Donnell cautioned that the watchdog office’s planning is "not static" and could change as challenges for EPA and the Chemical Safety Board "evolve and emerge."

"We look forward to meeting or exceeding our goals and to fulfilling our mission," O’Donnell said.