ESA emerges as weapon for enemies of environmental rules 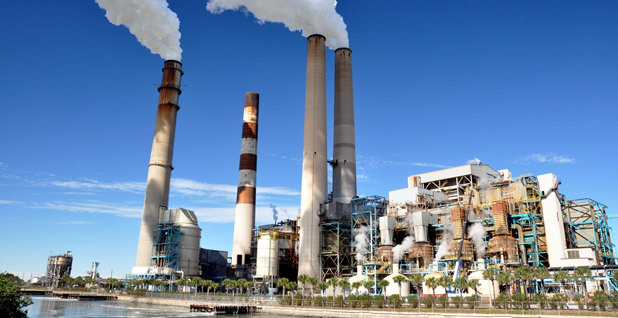 Tampa Electric’s Big Bend Power Station in Hillsborough County, which is a warm-water refuge for manatees, may shut down if the Clean Power Plan is finalized. Photo courtesy of Flickr.

But as Endangered Species Act challenges to other seemingly unrelated environmental rules have flared in the courts and on Capitol Hill, some legal experts and conservationists are saying the Republicans might be onto something.

ESA’s Section 7 requires agencies to consult with the Fish and Wildlife Service if a proposed action may affect an animal or plant listed as endangered or threatened.

The problem, conservationists say, is EPA has a poor track record at initiating those consultations for major rules like the Clean Power Plan, which is the centerpiece of the president’s strategy to combat climate change.

"The manatee example — while crazy — does highlight an issue that is going to get some traction," said Brett Hartl, the Center for Biological Diversity’s endangered species policy director. EPA’s limited formal consultations with Fish and Wildlife "is a major legal failing," he said.

Historically, industry, states and other regulated groups have not tried using Section 7 to undermine major EPA rules in court. But that could soon change, Hartl said.

There has been a recent uptick in groups citing the consult provision against EPA in court and elsewhere. Environmentalists recently raised concerns that EPA failed to consult with FWS biologists when it finalized its Waters of the U.S. rule, which defined the bogs, marshes, streams and wetlands that fall under the Clean Water Act (Greenwire, June 15).

EPA is also fighting lawsuits from environmental groups over the agency’s refusing to engage in a consultation before approving pesticides. Earlier this week, the agency entered a legal settlement with the Center for Biological Diversity requiring the agency to consider the effects of glyphosate and atrazine — two of the country’s most widely used pesticides — on 1,500 endangered plants and animals (Greenwire, June 24).

And in California, agricultural interests are turning to Section 7 in court to challenge water management decisions that reduce flows to farms in the drought-ridden state (Greenwire, June 5).

So while conservationists are quick to criticize the Republicans efforts, they are also concerned that conservative lawmakers may have drawn a road map for legal challenges to the Clean Power Plan and other major environmental rules.

"Sooner or later," Hartl said, "someone from the industry side is going to catch on to this."

‘The law is the law’

The rules, which are expected to be finalized this summer, are seen by many in the power industry as an effective ban on building coal-fired facilities because such plants would be required to use expensive and largely unproved carbon capture and storage technology to reduce their climate impacts. Bishop and Inhofe wrote they were "astounded" that EPA didn’t reference a Section 7 consultation in the proposal and raised concerns about the inadequacy of the ESA review of its carbon emission limits for existing power plants (E&ENews PM, June 15).

Previously, Bishop had pressed FWS Director Dan Ashe on whether his agency should have been consulted because coal-fired power plants would shut down as a result of the rules, which could, the Utah Republican suggested, harm manatees. Unable to survive for long in water below 68 degrees Fahrenheit, the endangered sea cows flock to the warm-water discharges from coal-fired power plants during winter (E&ENews PM, April 8).

Bishop told Greenwire the administration can’t pick and choose when to obey the Section 7 requirement, adding that the issue illustrates why the Endangered Species Act needs to be reformed.

"The law is the law," he said. "If they want the law, they’d better live up to it. If they don’t, then let’s work on ways we can speed the [compliance] process up, which is one of the things they have refused to do so far."

Conservationists and endangered species experts scoffed at the GOP campaign as a publicity stunt that likely won’t amount to anything. They point out EPA considered manatees and other species before finalizing cooling-water intake regulations for power plants and other facilities in May 2014, which raised issues similar to the ones Bishop and Inhofe cited in their letter, such as thermal impact. For that rule, EPA did conduct a Section 7 consultation with FWS, and the service found it would not adversely affect the species.

But conservationists also admit Bishop may have a point.

"I would say that somewhere, a House majority staffer on the Natural Resources Committee is smirking," said Lewis & Clark Law School professor Daniel Rohlf, an endangered species expert. "It almost strikes me as somewhat of a prank.

"I don’t think it’s a very serious letter, though it does raise some serious issues with respect to the endangered species."

GOP request could ‘come back to bite them’

Rohlf said a consultation on the manatee issue would likely be brief, though other experts offered different views. Rohlf contended that it would entail only an exchange of one-page letters between EPA and Fish and Wildlife, with EPA saying the rule would likely have no adverse impact and FWS concurring in response.

But Ya-Wei Li, the director of endangered species conservation at Defenders of Wildlife, said a consultation would likely need to be a broad programmatic look at the entire rule’s effect on countless species.

But Li added that he would be "a little befuddled about how you go about doing it."

"It would be difficult to tease out what the connection would be from the size of this rule to all the potential species affected by the rule," he said.

Li was quick to add the request by Bishop and Inhofe could backfire.

"What they are asking for could come back to bite them later on," he said. "Manatees are one example where it could favor them. But many species won’t benefit from these discharges, and the consultations may result in more restrictions" on power plant emissions.

Fish and Wildlife, for its part, seems content to stay out of the Clean Power Plan fight.

"EPA, as the expert agency on the Clean Air Act rules, is best positioned to understand if their rules will affect listed species or designated critical habitat," Ashe wrote in an April 20 letter to Bishop. "The Service does not have the technical expertise in the Clean Air Act to be able to independently do so."

Rohlf said there are countless other examples where EPA could — and perhaps should — conduct an ESA consultation with which Bishop, whose native Utah is home to oil and gas development, would disagree.

"When we start looking at oil and gas leasing on federal land and everything else that federal agencies do that could affect greenhouse gas emissions," Rohlf said, "we are going to be doing a lot of endangered species consultation."

And California Sen. Barbara Boxer, the top Democrat on the Environment and Public Works Committee, was blunt in her dismissal of the Republicans’ letter.

"These are the same people who want to repeal the Endangered Species Act, so to think that they’re one bit concerned about God’s species is a joke. The whole thing is," Boxer said in an interview. "If the court really wants to know whether this is a sincere effort to protect endangered species, all they have to do is look at the voting records of these two people and they’ll see that they’ve dedicated a good part of their lives to trying to overturn the Endangered Species Act."

Legal experts cautioned that using a Section 7 strategy to weaken or delay the greenhouse gas rules, while untested, could work in court.

Consider this hypothetical: A state averse to the greenhouse gas regulations — Texas, for one — brings a lawsuit claiming that emission controls or shutting down power plants will affect a listed species within its borders. So, the Lone Star State would argue, EPA should have consulted FWS on the rule.

"I don’t think it’s far-fetched at all to perceive that some party may advance that sort of argument as a challenge to the GHG rule," said John Martin of the law firm Crowell & Moring, who advises clients on endangered species and other natural resources issues.

Li, of Defenders of Wildlife, called the hypothetical "ironic" because "from the flipside, [conservationists] often make that argument."

But, he added, "I could see that argument getting some traction."

Several environmental attorneys cautioned, however, that an industry group may have more trouble than a state in establishing standing for such a claim. A power company or other trade group arguing that the rule harms it economically may have difficulty lassoing that injury to endangered species protections.

Further, almost no parties highlighted the issue in their comments on the power plant rule they submitted to EPA, though Wisconsin mentioned ESA. That may make it harder for states or industry groups to bring Section 7 challenges in court later.

Martin added that EPA is in a bit of a bind because it’s not clear to most stakeholders when the agency consults and when it doesn’t.

Li and his group are trying to shed some light on the practice. Defenders of Wildlife is putting the finishing touches on a database — compiled from open records requests — of every FWS Section 7 consultation since 2008.

Although Li is still going through the data, he said it was clear that some EPA divisions, such as the Water Office, have a fairly good record of at least initiating a consultation for actions like stormwater permits. Others, like the pesticide division, haven’t consulted with FWS in about a decade.

In California, agricultural interests seeking to challenge water management directives in order to obtain more irrigation water have turned to Section 7 in a spate of lawsuits.

In some instances, environmentalists claim the lawsuits have distracted attention from how the state’s massive water infrastructure for delivering water to population centers and agriculture — the State Water Project and Central Valley Project — has imperiled listed fish species, like the delta smelt.

Water contractors and irrigators in the San Joaquin Valley have also claimed that diversions in the Central Valley Project reservoirs to protect one listed species of salmon have threatened another listed salmon species (Greenwire, June 11).

And the Center for Environmental Science, Accuracy and Reliability recently filed another lawsuit challenging the National Park Service’s management of the Hetch Hetchy Project, an aqueduct that delivers water from the reservoir in Yosemite National Park to San Francisco.

CESAR, as it is more commonly known, says its mission is to "bring scientific rigor to regulatory decisions undertaken pursuant to environmental statutes and to ensure consistent applications of these statutes throughout all industries and all sectors." But the group has ties to the Westlands Water District, the nation’s largest agricultural district.

The Hetch Hetchy Project includes diversions from the Tuolumne River, which CESAR argues reduce flow north of the aqueduct and threaten several species — while simultaneously reducing the amount of water that reaches Westlands’ farms. The group claims the Park Service should have consulted FWS over the project.

That case is ongoing, and it remains to be seen whether the Section 7 argument will pass legal muster. A key issue in that case is whether the farmers have standing.

"On its face, the suit claims to want to increase flows from the Tuolumne to protect downstream listed fish," Poole said. "But given the extensive efforts of Westlands in the courts, Congress and elsewhere to reduce instream flows and protections for native fish, it’s hard to believe that their real interest is in restoring fish and their habitat."

Poole said she hopes courts will determine whether there is merit to these cases, or whether irrigators are simply trying to cynically use the consult provision to their advantage.

"It’s concerning if this is sort of a meritless attack on something that doesn’t really harm endangered species or otherwise protect the environment," Poole said. "But the courts are supposed to be the gatekeepers of that."