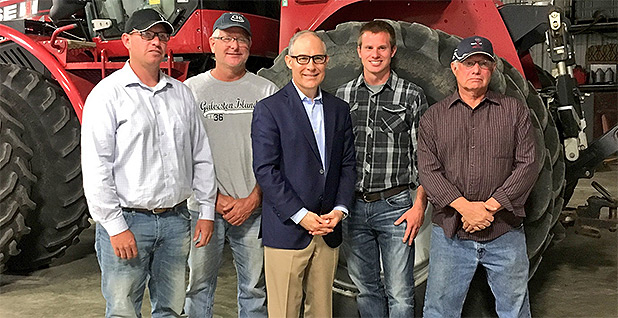 Buffeted by reports of opulent spending and misuse of power, Scott Pruitt left Washington, D.C., last week for an agriculture tour touting his support for farmers.

The EPA chief found little reprieve in the Corn Belt.

Farmers and agriculture groups are furious at his agency’s actions on the renewable fuel standard, which requires blending biofuels into the nation’s gasoline supply.

Both critics and supporters of Pruitt are wondering whether he will either quit or be fired, and being in the middle of a fight over the RFS has shaken his standing with would-be allies.

The agency also gave waivers to three of energy giant Andeavor’s smallest refineries. It was the first exemption for a company of Andeavor’s size. Renewable fuel credit prices hit five-year lows in late May.

With Pruitt on their turf, ethanol advocates let fly.

In Kansas, the chairman of the Anderson County Republican Committee called him "a dead man walking," and the CEO of the Renewable Fuels Association, Bob Dinneen, wrote a blog post wondering whether Pruitt’s trip was "anything more than a hollow good will tour to deflect attention from his anti-ethanol policy."

"Welcome to Nebraska, Scott Pruitt — will you finally choose farm families over Big Oil?" read one Facebook ad. The accompanying image opposed a three-generation farm family against an oil refinery. The same ad ran in Iowa and South Dakota.

Former Sens. Byron Dorgan (D-N.D.) and Jim Talent (R-Mo.) — both of whom helped implement the RFS — called on Pruitt to halt waivers to big oil refiners, according to a release by the National Biodiesel Board.

Outside spending groups have also waded in to slam Pruitt.

American Future Fund, a dark-money outfit that was once part of the Koch network, debuted a television ad accusing Pruitt of "embarrassing" President Trump with near-weekly scandals.

As a 501(c)(4) group, or a political nonprofit, AFF does not disclose its donors, but The New York Times reported in 2010 that the group began with a large contribution from Bruce Rastetter, a co-founder and former chief executive of Hawkeye Energy Holdings LLC, one of the largest ethanol producers in the nation.

Rastetter, once a board member at Growth Energy, is one of the most powerful agriculture industry advocates in the GOP. He supported the president’s 2016 run, served on the campaign’s agriculture committee and was seen as a possible administration appointee during the transition.

Industry made sure to prop up its friends.

Ernst and Grassley, the leading RFS proponents in Congress, have been tough on Pruitt in recent weeks. Grassley said he would call for Pruitt’s resignation if EPA continues granting the refinery waivers.

In a June 6 call with reporters, the senator said Pruitt misled senators during the confirmation process by suggesting he’d support ethanol.

"I know he’s had meetings with Democratic senators saying he’s pro-ethanol," Grassley said. "But all the actions are contrary. He’s hoodwinked all of us who believed him" (E&E News PM, June 6).

Like many of his actions in office, Pruitt’s moves on biofuel credits look to benefit the oil industry, but they run up against promises by Trump. On the campaign trail in 2016 and in the White House, Trump has repeated support for corn farmers.

Ethanol backers are careful not to hit Trump in their volleys at Pruitt, framing the EPA chief as the problem, not his boss.

In April, the president promised to allow 15 percent ethanol all year, but no policy changes followed.

Midwestern Democrats in red states are eager to leverage Pruitt’s support for oil and gas at ethanol’s expense, a chance to hit the administration.

The North Dakota Democratic Party accused Rep. Kevin Cramer, a Republican Senate nominee, of "failing" the state for his role on the Republican Study Committee, which opposes ethanol subsidies. Cramer faces Democrat Sen. Heidi Heitkamp in one of the midterm’s most consequential Senate contests.

State Rep. Abby Finkenauer (D), a top party recruit in the competitive 1st District, did not call out Pruitt by name but referenced "shady backroom deals that would harm our renewable energy industry."