Ethics chief found a ‘bit of the Wild West’ — transcript 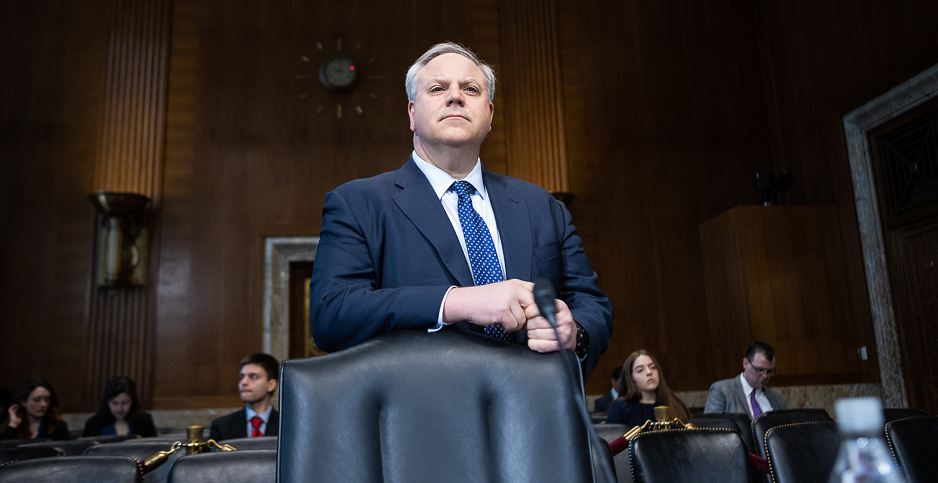 Interior Secretary David Bernhardt was cleared in an ethics investigation over his involvement in a pesticide review. Francis Chung/E&E News

"Honestly, from having talked to staffers here and everything, I think it was a little bit of the Wild West when it came to ethics compliance at the time," de la Vega told two investigators from Interior’s Office of Inspector General in a June 11, 2019, interview.

E&E News obtained a transcript of de la Vega’s 35-minute interview, along with other previously undisclosed documents relating to an IG investigation of current Interior Secretary David Bernhardt, under the Freedom of Information Act.

The 2019 IG report cleared Bernhardt of allegations that he had improperly interfered with a pesticide review. The investigators noted they "found no evidence that Secretary Bernhardt’s involvement in this matter violated his ethics pledge or Federal ethics regulations."

The investigators’ backup material, though, also sheds some light on the Interior ethics office shortcomings that de la Vega said he inherited. Those shortcomings once included Bernhardt getting an unwritten go-ahead for involvement in a separate issue important to the Westlands Water District, his former client.

Bernhardt told The New York Times last year that he had received "verbal clearance" from an ethics attorney in 2017 to discuss the broad topic of reduced protections for endangered fish that would benefit the California farmers he represented as both lawyer and lobbyist (E&E News PM, Feb. 19, 2019).

"I’m not having that in this office anymore," de la Vega said of the unwritten ethics nod. "So we are very disciplined about how we approach any questions that the secretary gets. We don’t wing it back to him verbally. If he doesn’t get it in writing, he’s not gotten it."

A subsequent IG investigation concluded that the Las Vegas flight "might have been avoided" and that it was approved by an Interior ethics officer who "could not adequately review" the proposed travel because of a lack of complete information. The IG’s overall wording, though, was not particularly pointed (E&E News PM, April 16, 2018).

"Nobody in this office asked, ‘Well, why is the secretary going out to Nevada?’" de la Vega said. "And nobody bothered to ask that it wasn’t an official thing, right? It was for him to talk to a freaking hockey team about personal stuff."

De la Vega, who is both director of the departmental ethics office and Interior’s designated agency ethics official, vowed that "this will never happen again."

"There was a lot more discipline from 2018 going forward, because of what [we] have instituted as far as policies and procedures to make sure that, you know, we’re handling this right," de la Vega said.

Last December, the IG published the results of its investigation into allegations that Bernhardt in 2017 blocked a Fish and Wildlife Service study of pesticides’ impact on endangered species (E&E News PM, Dec. 10, 2019).

E&E News subsequently filed a FOIA request for more than three dozen attachments to the report. The Interior watchdog office released 119 pages of documents in response but withheld 458 pages in their entirety to protect law enforcement records.

In response to E&E News’ request, the inspector general also found eight pages of records that originated with the Interior secretary’s office. That matter was referred to the secretary’s office, which has since acknowledged the request for those documents.

The released material included a transcript of a July 12, 2019, interview with Bernhardt, in which he bluntly explained his involvement in the pesticide issue and his review of a lengthy draft biological opinion.

"I was troubled because, as I read it, a massive amount of work had gone into a process that I looked at and thought, ‘This is completely and totally against our regulatory paradigm, and what a pathetic waste of our energy, effort and resources without legal intervention,’" Bernhardt said.

Bernhardt added that he decided to dig deeper, thinking "maybe I’m wrong about that … maybe I’ve misread it."

The IG report indicated Bernhardt’s deep dive into the matter was somewhat unusual but not improper or unprecedented.

Officials with FWS and the Interior solicitor’s office told investigators similar things. One person in the solicitor’s office said Bernhardt enjoyed working on matters involving the Endangered Species Act, according to an interview summary.

That official "opined that it was unusual for a political appointee to become involved in a consultation," the record said.

"However, Bernhardt held a long-time interest and expertise in ESA Section 7 and that Bernhardt enjoyed working on ESA issues as an intellectual exercise."

A 1994 graduate of Syracuse University College of Law, de la Vega joined Interior following several years in various senior legal positions at the White House, including as ethics counsel to the vice president.

"My first week here, I had informed [an Interior official that] our standards were changing dramatically and that we are not simply signing off on things without all the information," de la Vega told investigators.

Zinke, de la Vega noted as an example, "met with everybody" while "Secretary Bernhardt will not, does not meet with anybody, OK, unless we sign off on it in Ethics."

Last year, Bernhardt issued a secretarial order consolidating all ethics program workers, except for those with the Office of Inspector General and the National Indian Gaming Commission, into a department ethics office within the Office of the Solicitor.