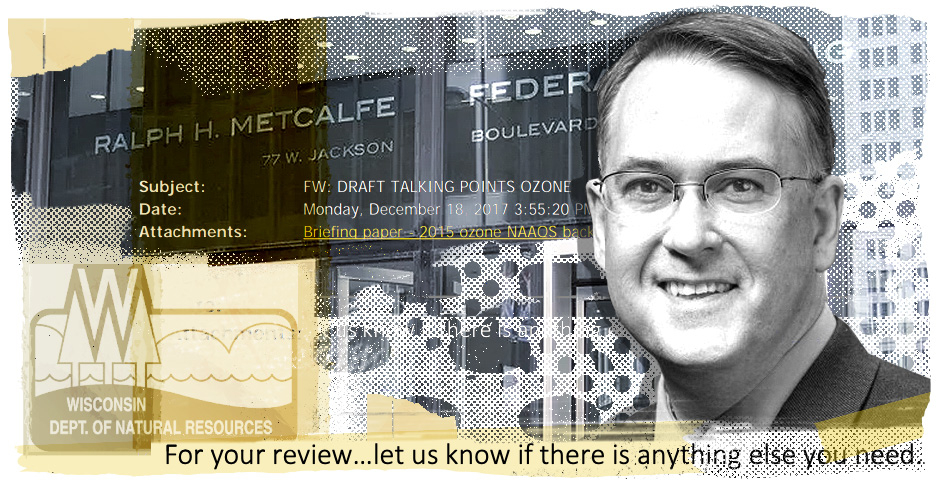 As EPA moves to reconsider a set of politically fraught air quality decisions for Wisconsin and address other environmental battles, one key player must watch from the sidelines.

The reason: Kurt Thiede, the agency’s current Midwest regional chief, played at least a supporting role several years ago in shaping those decisions.

As deputy secretary of Wisconsin’s Department of Natural Resources, Thiede was looped into a lobbying campaign by then-Gov. Scott Walker (R) to dissuade EPA from declaring a large swath of land along Lake Michigan out of compliance with ground-level ozone standards.

That campaign largely prevailed despite objections from EPA career staff.

Now, under legal pressure, the agency wants the opportunity for a do-over. Thiede, meanwhile, is barred from involvement in any determinations on whether nine eastern Wisconsin counties clustered on or near the lake meet the national standards, his recusal statement shows.

Thiede also has to steer clear of about a dozen other matters, the bulk of which also date back to disputes that arose under Walker, according to the document, obtained by E&E News under the Freedom of Information Act.

Those include an environmental group’s long-standing petition to strip Wisconsin of its authority to issue water pollution discharge permits unless it takes "corrective action," and anything having to do with Foxconn Technology Group, the Taiwan-based electronics giant whose plans for a massive manufacturing complex in the state once won praise from President Trump.

Thiede, who has been administrator of EPA’s Chicago-based Region 5 office since January, was not available for an interview in recent days. In written answers to questions routed through a spokeswoman, he said he didn’t recall "significant involvement" in the ozone attainment designations while still at the Wisconsin Department of Natural Resources but would likely have been briefed on the issue and kept Walker’s office informed.

But Thiede confirmed he is now recused "to avoid any perceived conflict of interest, given it was an issue that directly involved EPA Region 5."

Thiede, who has a degree in wildlife biology, spent almost two decades at the Wisconsin agency, becoming deputy secretary in 2015 under then-DNR chief Cathy Stepp, a former state senator and homebuilder, his LinkedIn page indicates. He became Stepp’s chief of staff when she took over as Region 5 administrator in early 2018 and then advanced to the top job when she left EPA this January to run a Missouri water quality organization.

The regional office’s territory spans Illinois, Wisconsin and four other Midwestern states. Several other current officials also hail from Wisconsin state government, records show. For example, Joe Liebau Jr., now Region 5’s chief of staff, is also a Department of Natural Resources alumnus, which could limit his actions in federal government. Liebau is "authorized to participate in new or future specific party matters that involve the State of Wisconsin, but not on the very same specific party matters on which [he] worked on personally and substantially while employed by WDNR," according to his impartiality determination dated March 18 and also obtained by E&E News under FOIA.

In 2017, however, a high-priority task for Region 5 officials was making the first cut at compliance decisions for the stricter ground-level ozone standard of 70 parts per billion that EPA had adopted two years earlier. A nonattainment determination can entail stricter controls on industries that spew nitrogen oxides or volatile organic compounds, the two classes of emissions that react in sunlight to create smog-forming ozone.

Particularly for Wisconsin, those EPA determinations were politically charged after Walker announced in 2017 that Foxconn would build a Racine County complex employing thousands of people in return for a $4 billion incentives package. That deal, whose status is now murky, became the centerpiece of Walker’s unsuccessful reelection campaign the next year.

EPA had initially recommended deeming Racine County and much of the surrounding area in nonattainment for the 70 ppb limit, a step that could have required Foxconn to install state-of-the-art air pollution controls, according to reporting by the Milwaukee Journal Sentinel.

In response, Walker’s office, in league with Department of Natural Resources staffers, mounted a concerted lobbying blitz aimed at then-EPA Administrator Scott Pruitt and other political appointees, according to hundreds of pages of emails and other documents obtained by the environmental group Clean Wisconsin through a records request to the state.

Those documents show Thiede was repeatedly included in correspondence between DNR officials and Walker’s office. In late 2017, he was also asked to review a draft set of talking points on the ozone issue. In April 2018, a few months after Thiede left the state agency, Wisconsin won a major victory after EPA reversed its original recommendation and deemed Racine County and two other nearby counties in attainment with the 70 ppb limit (Greenwire, May 1, 2018).

That decision sidestepped the concerns of career Region 5 employees who had previously cast doubt on Wisconsin’s argument that ozone-forming pollution from outside the state’s borders was to blame for any compliance problems.

Clean Wisconsin later joined other environmental groups in challenging EPA’s attainment decisions for Wisconsin and elsewhere in litigation before the U.S. Court of Appeals for the District of Columbia Circuit. Those consolidated cases are pending, but last spring, EPA asked the court for permission to revisit its Racine County decision, as well as several others around the country (Greenwire, May 14, 2019).

A three-judge panel has since sought feedback on its leeway to set a deadline for EPA to act on those disputed determinations, but it has not yet ruled. EPA meanwhile recently proposed to reclassify another southeastern Wisconsin county covered by Thiede’s recusal statement as now in compliance with its 2008 ozone standard of 75 parts per billion. Signing off on that proposed rule was Cheryl Newton, Region 5’s deputy administrator.