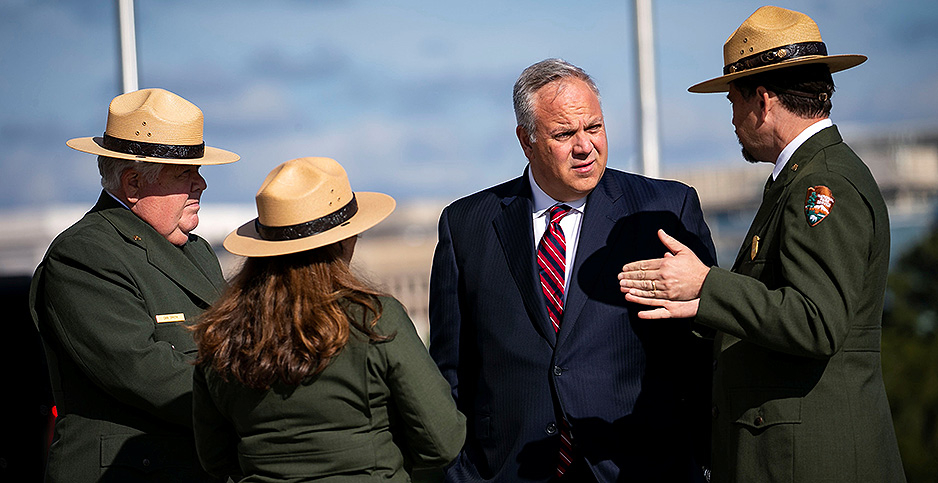 Interior Secretary David Bernhardt speaks to park rangers before the reopening of the Washington Monument in September. Alexander Drago/REUTERS/Newscom

Bernhardt told investigators a Fish and Wildlife Service pesticide review had amounted to a "pathetic waste of energy, effort, and resources." Himself a former Interior solicitor, he successfully pressed the department’s lawyers on a critical flaw in their analysis.

"They agreed with Bernhardt’s observations, and [said] that he raised valid legal concerns," Interior’s Office of Inspector General reported yesterday.

And when multiple federal agencies were sorting through the complex pesticide issues, it was Bernhardt who summoned representatives from each to the FWS offices for a daylong meeting where he insisted more actual pesticide usage data was needed.

"Afterward … the FWS formed work groups that collected the requested data until they felt they had exhausted all available data sources," the IG recounted.

A former lobbyist, Bernhardt returned to the Interior Department in 2017 with far more agency experience than Zinke. Zinke had interacted with the department as a one-term congressman, while Bernhardt had served in Interior for eight years of the George W. Bush administration.

As deputy, Bernhardt was the detail-oriented executive.

According to a complaint filed by the Campaign Legal Center, Bernhardt reached out to a "senior water resources official for the mid-Pacific region of the Bureau of Reclamation" to press the issue.

Interior has said Bernhardt is "fully in compliance with his recusal agreements."

Pesticide consultations among federal agencies, like the one that prompted the newly completed IG investigation, tend to be "especially complex, difficult, and controversial," the report noted. Getting involved can require a combination of technical expertise, self-confidence, and personal or political motivation.

"As an example," the IG report noted, "one of the FWS officials said that former Interior Secretary Sally Jewell became involved when the EPA was consulting the FWS on an action relating to rules governing the permitting of cooling water intake structures for industrial facilities."

Bernhardt had inserted himself into a consultation FWS was conducting with EPA to assess the potential effects of several companies’ proposed registration or reregistration of three pesticides — malathion, diazinon and chlorpyrifos — on endangered species.

In the fall of 2017, Bernhardt said he sent a career FWS official an email telling the official he wanted to "get up to speed on the issue." He later told investigators he did not remember why he made this request, but someone at EPA or the White House Council on Environmental Quality might have told him about the consultation.

"Bernhardt said pesticide consultations were notable because they were ‘the most complex consultations on the planet,’ and therefore the agencies that conducted them often struggled to complete them," the IG recounted.

Bernhardt further told investigators he was "extremely troubled" when he reviewed the draft biological opinion for malathion because it was "completely inconsistent with our regulatory paradigm."

The FWS team had erred, he reasoned, when it decided to base its analysis on the pesticide’s approved usage rather than analyzing how it had actually been used in the years it had been on the market. He ordered more work.

Republican Rep. Rob Bishop of Utah hailed the exoneration, declaring that "Bernhardt’s years of legal experience and leadership roles within the Department are an asset, and he continues to adhere to strong ethical standards."

Lori Ann Burd, environmental health director for the Center for Biological Diversity, countered with a darker view of Bernhardt’s power.

She said: "What the IG failed to realize, and no staffer was brave enough to say, is that what Bernhardt did is a radical and unlawful departure from the Endangered Species Act."