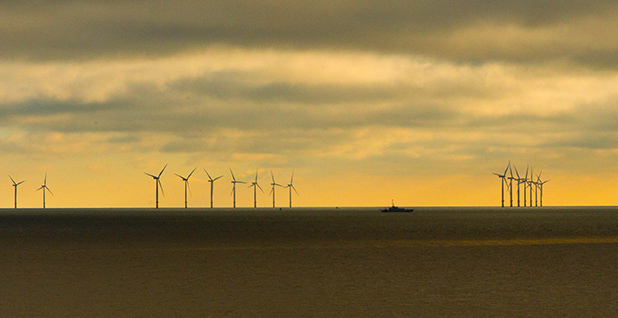 For an offshore wind industry accustomed to decadeslong development, 2015 is turning into a banner year. In the first six months, European offshore wind installations touched 2.34 gigawatts — establishing the best year ever for installed capacity. Output tripled over the same six-month period a year ago, and total installed offshore wind capacity in Europe hit 10.4 GW generated from 82 wind farms in 11 countries (rivaling the power production of 10 large nuclear power plants).

"The bottom line is it’s been a dream year for Germany," said Oliver Joy, political affairs spokesman for the European Wind Energy Association (EWEA) in Brussels.

Germany’s overall wind power output in the first half of 2015 was 39 percent higher than a year ago, with a combined wind and solar portfolio now estimated above 80 GW, according to Germany’s renewable lobby group, BEE. Add in biomass and hydropower numbers, and on July 25 the country is said to have hit a new peak record — an astounding 79 percent of domestic power consumption supplied by renewables.

Germany had forecast 2 GW for all of 2015 and surprised many with 422 new offshore wind turbines already connected through June 30. Accounting for almost 1.8 GW, the uptick partly represents a backlog of projects now all coming online at once. Grid connection issues have been overcome. At the same time, turbine size has grown, while reform of Germany’s Renewable Energy Sources Act (EEG) has also given investors some clarity.

The German Wind Energy Association (BWE) is forecasting a total capacity of 3.3 GW in the system by the end of 2015, putting the country firmly in second place behind the United Kingdom, the unrivaled leader with just over 5 GW installed capacity. Beyond these two countries, however, a more robust market still remains an elusive goal.

"There’s a risk countries won’t meet their 2020 [renewables] targets by the end of the decade," said Joy, pointing to slowdowns in the United Kingdom, France and the Netherlands with some concern.

Germany, as well, is in somewhat of a holding pattern. It recently reduced its offshore wind targets from 10 to 6.5 GW by 2020 and from 25 to 15 GW by 2030. Government support for renewable energy remains strong, yet weaning the 2014 EEG reform away from the much-loved feed-in tariff system — which financed projects by allowing inflated prices for renewable energy — is causing considerable disruption. As of 2018, the level of financial support looks likely to be determined via an auction process, causing some to predict a feared interruption in the post-2020 time frame.

"We already need in 2016 clarity on the tender design, so that the expansion can be continuously driven," said Norbert Giese, chairman of the German Engineering Association (VDMA) steering committee for offshore wind energy.

At a recent German Economics Ministry event heralding the coming tender system, Hermann Albers, president of the BWE, expressed skepticism. Albers pledged support but advised those in attendance to not underestimate the capacity of the renewables industry.

Winning tenders (bids) do not necessarily materialize in projects after being awarded. "That’s the experience we see from other countries," said Andreas Wagner, managing director of the German Offshore Wind Energy Foundation. "The concern is, first and above all, to have a regular tendering frequency with sufficient capacities to be tendered."

Wagner cited the United Kingdom as a cautionary example. Fifteen years earlier, the country fumbled its tendering scheme for onshore wind. Now, with its recently passed "Contracts for Difference" tendering system, all eyes are watching to see what transpires.

In the past, bids arrived unrealistically low or didn’t materialize because of planning permission problems. Times have changed, and the country’s tendering scheme is now on firmer footing, according to RenewableUK, the country’s renewable energy trade association. Already, one round of bidding has closed, and the association says the offshore wind industry is on track to deliver more than 10 GW of power by 2020.

Last week, the U.K. planning authority gave the go-ahead to what could become the largest offshore project in the world — two 1.2 GW farms called Dogger Bank Teesside A&B. The latest project, costing as much as $12.5 billion, will be built by a consortium of four European utilities in a joint effort that will include as many as 400 wind turbines, while providing enough electricity for 1.8 million homes.

Analysts say both countries are still faced with the challenge of coming up with the funding needed to execute in a time of strict budgetary constraints. Recent improvements in technology mean that the new generation of offshore wind farms being built over the next few years is likely to achieve much higher load factors — potentially driving down electricity costs significantly.

At the same time, auctions present an additional hurdle. Developers can invest significant amounts of money and not win a contract. The systems have to be carefully designed, warned Giese of VDMA. "To avoid a stop-and-go in the market, each model is essential to provide clear rules for the transition from fixed-price remuneration toward competitive tendering," he said.

France and Poland may wade in

In the post-2020 third wave of expansion, industry analysts are counting on growth to other parts of the European Union, across which offshore wind farms can now be found. Through 2016, there is an overall healthy pipeline of offshore wind projects expected to reach financial closure, according to data provided by the EWEA. Representing more than €10 billion ($10.93 billion) in financing, the projects involve sites in four countries — including the Netherlands, Germany and Belgium — with the United Kingdom accounting for nearly two-thirds of the combined 2,192 megawatts of power.

France could be a game-changer given its extensive coastal waters. Still, the country has yet to complete a single offshore wind farm as it moves through a third round of tenders. Furthest advanced are the three projects — Saint-Nazaire (480 MW), Courseulles-sur-Mer (450 MW) and Fécamp (498 MW) — belonging to Eolien Maritime France, a consortium of EDF Energies Nouvelles and DONG Energy. The French government has supported the development of several demonstration tidal arrays.

Last week, it launched a tender for several floating offshore wind turbine projects in what is set to be the first attempt to test this new technology on an industrial scale.

As with Germany and the United Kingdom, the French government is said to be reviewing the tender process in order to encourage competition and drive down costs. Clarified rules in the recently passed energy transition law could boost the sector, yet nothing of any significance is expected to go online until after 2020.

Poland is another country with great offshore resources. It has both a large coastline and high wind speeds, not to mention shallow waters that are ideal for large-scale deployment. Yet it has virtually no regulatory framework in place. For developers seeking greenfield sites, the Baltics are wide open, said Joy of the EWEA.

"In terms of countries making forays into offshore wind, we are positive on the outlook," Joy added. "The industry will see a wider spread in the next five years. It will be a positive story. It’s inevitable."