EV deal shows ‘Lithium Valley’ could be for real 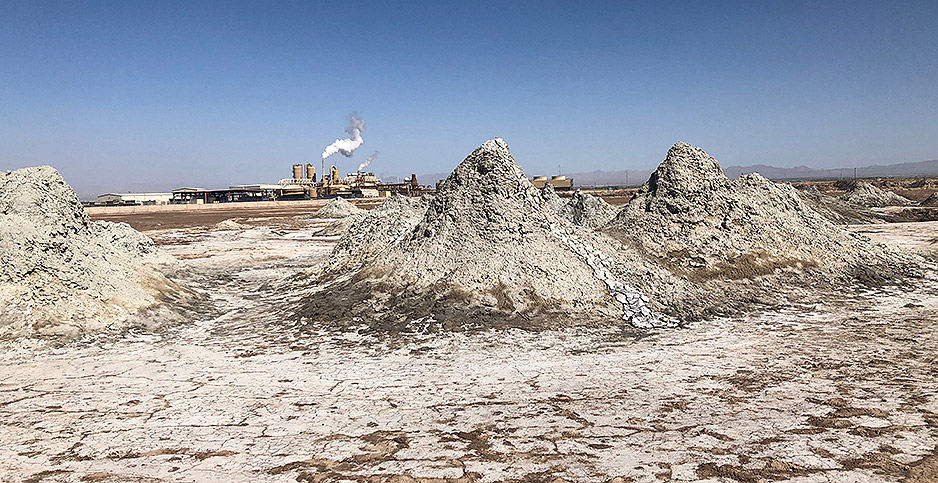 Mud pots formed by subterranean minerals and steam grow near the shore of California's Salton Sea. In the background is the EnergySource geothermal plant, a competitor to Controlled Thermal Resources, which struck a partnership last week with General Motors Co. to produce lithium for car batteries. David Ferris/E&E News

If all goes to plan, General Motors Co.’s future electric cars will rely on batteries made from a broiling-hot, brownish fluid that gushes from the California desert.

The contours of that future emerged on Friday, when GM struck a deal with a little-known company called Controlled Thermal Resources (CTR) to supply the country’s largest domestic automaker with tons of lithium from a desolate area called the Salton Sea.

The arrangement is the first concrete sign that "Lithium Valley," as its boosters call it — a green industrial ecosystem that produces zero-carbon electricity, battery-grade lithium and lots of jobs — could actually become a thing.

The contract "is the first of its kind by a major automaker and positive proof of how important this region is to the future of electrifying transportation in the most environmentally responsible way possible," said Karen Douglas, a member of the California Energy Commission. "The deal is a significant, encouraging milestone toward realizing the state’s lithium valley vision."

The vision for now depends on CTR. The company says it is ready to make mind-boggling quantities of both lithium and electricity sooner and more copiously than another, more experienced player.

Only a couple of years ago, the idea of producing lithium on the banks of California’s Salton Sea was little more than an experiment (Energywire, Oct. 30, 2019).

Lithium at the Salton Sea is a byproduct of making electricity. A well taps hot water underground, creating geothermal energy, and the geothermal "brine" is especially rich in lithium and other salable elements.

The resource sits in the Imperial Valley, which has the state’s highest unemployment. Since 2019, the CEC has run with the lithium idea, estimating that the area could supply 40% of the world’s lithium demand. It spent $16.5 million on grants for technology breakthroughs and organizing a commission with a vision of turning the barren shores of the Salton Sea into a hub for electric vehicle production.

Events have converged in the last few months to push that plan to the fore.

Big automakers have declared they will electrify big chunks of their future fleets, sparking a hunt for the critical battery element of lithium. Meanwhile, the Biden administration has put renewed focus on renewable energy as a way to fight climate change, and domestic sourcing of critical minerals as a tool to combat the rise of China.

Traditional energy players are hunting at the Salton Sea, like Occidental Petroleum Corp. The Houston oil and gas giant owns TerraLithium, a company trying to convert lithium brine into battery materials that has expressed interest in the Salton Sea’s lithium fields.

GM said Friday that it would make a multimillion-dollar investment in CTR for the first rights to lithium from CTR’s first project, dubbed Hell’s Kitchen.

"By securing and localizing the lithium supply chain in the U.S., we’re helping ensure our ability to make powerful, affordable, high mileage EVs while also helping to mitigate environmental impact and bring more low-cost lithium to the market as a whole," said Doug Parks, a GM vice president, in a statement.

Neither GM nor CTR would specify how much lithium is involved. CTR’s CEO, Rod Colwell, wouldn’t say if GM is taking an ownership position in the company.

The Salton Sea’s lithium resource has been known for decades but has been devilishly hard to capture.

It starts with the brine that has been heated to 400 degrees Fahrenheit by hot rock formations underground. It’s well-established that this brine can create electricity by being used to create steam that spins a turbine and creates electric current.

The problem with getting at the lithium is that it is mixed with a brew of other ingredients, especially silica. The lithium, present at only 250 parts per million, needs to be removed along with other minerals as the water gushes at a pace of thousands of gallons a minute out of the ground.

The heat, the speed and the difficulty of separating the particles are each a challenge.

CTR says that its proprietary process will produce 20,000 metric tons of lithium hydroxide — a high-grade form of lithium ready for battery production — by the first quarter of 2024.

"That’s amazing, if they can do that," said Tristan Childress, an economic geologist at the University of Texas at Austin. He noted that would be about 4.5% of the world’s current lithium supply.

At full build-out, CTR claims it could produce 300,000 tons of lithium, "which is more than the current production of Australia (wow)," Childress wrote in an email.

To hear Colwell tell it, there are automakers lining up behind GM to be the next customers. GM has rights only to the first stage of CTR’s output.

"Because of the demand, we really need to get cranking," Colwell said.

The footprint of the project would be very different from other lithium projects around the world. It would look unlike Australia, where traditional hardrock mining leaves tailings and holes in the ground, and unlike Chile, where lithium is dried in vast evaporation ponds that require scarce water.

Instead, it would be 7,000 acres of industrial buildings. "It ends up looking like a clean energy park, more like a subdivision than you’d think of with mining," Colwell said.

At full build-out, the projects would employ 1,450 maintenance and operations workers, and a rolling roster of 400 construction workers, Colwell said.

CTR is also tying into a part of the Biden administration agenda by seeking union labor. The company is in talks with the Laborers’ International Union of North America on construction jobs, Colwell said, and is negotiating with Imperial Valley College and other colleges and universities on training a workforce.

By comparison, Berkshire Hathaway Energy, an arm of the conglomerate headed by celebrity investor Warren Buffett, has been exploring the technology for minerals recovery at the Salton Sea for decades, and has more modest goals.

A commercial-scale plant, planned to start construction "as soon as 2024," could make 50 times that. That is 10,000 metric tons, or half of what CTR said it will do in the same time frame. BHE estimates that full use of its Salton Sea geothemal resources could produce 90,000 tons of lithium a year.

Weisgall said that Berkshire Hathaway is not entertaining offers from buyers while it figures out if it can actually capture the lithium, convert it from one form to another, and make money doing so.

"The technology to extract lithium from geothermal brine has not yet been proven on a commercial scale," he said. "It’s important to crawl before we walk and walk before we run."

GM has not specified how much lithium it needs to build the EVs it is now developing, like the Hummer SUV or the luxury Cadillac Lyriq, or future models not yet revealed. It is also unclear whether the domestic capacity exists to synthesize raw lithium into the Ultium battery cells that GM is building with its partner, LG Chem Ltd.

Both BHE and CTR have benefitted from government largesse.

Confidence in geothermal power from the Salton Sea also got a boost two weeks ago when the California Public Utilities Commission approved a new integrated resource plan that called for the state to get a particular 1,000 MW of electricity per year by 2026. The only form of energy that meets the requirements is geothermal power.

Geothermal power is an around-the-clock energy source, a significant advantage over solar and wind farms, whose value is limited because the wind only blows and the sun only shines at certain times of day.

That, even more than the news from GM, is creating confidence that a lithium-electric plant can succeed in Imperial County. The area has the state’s richest geothermal beds.

"That’s the biggest piece that will make, in my mind, geothermal even more attractive to come out of the Salton Sea," said Ryan Kelley, a member of the Imperial County Board of Supervisors.