‘Even lame ducks have wings’ 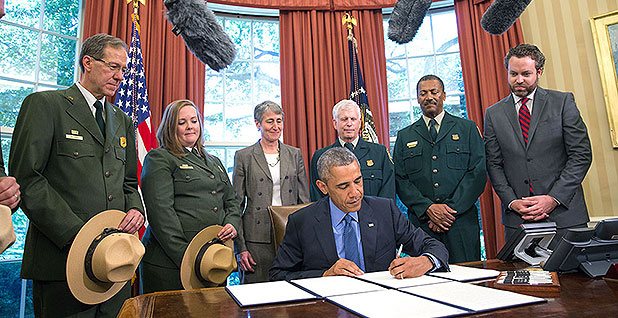 President Obama signing national monument designations in 2015. Are more on tap in the waning days of his presidency? Photo courtesy of the White House.

It was Clinton’s last ceremony in the East Room, but it wasn’t his last move on monuments. Two days later, on Jan. 19, he designated two historic fortresses on New York City’s Governors Island as national monuments. Hillary Clinton, then-first lady and a newly elected senator from New York, was among those pushing the president to make the designation.

"Even lame ducks have wings," Clinton’s Interior secretary, Bruce Babbitt, told The New York Times in 2000, after the designation of several other national monuments.

Tomorrow, President Obama will start his lame-duck stint, with 72 days left before he leaves the Oval Office. Like Bill Clinton and other past presidents, he’s expected to use the time — and his executive power — to cement his legacy on a host of issues, including energy and the environment.

"He will do everything he can between now and then," said Don Barry, who served as the Interior Department’s assistant secretary for fish, wildlife and parks during the Clinton administration.

From monument designations to last-minute rules (often dubbed "midnight regulations"), efforts to push through nominees, and pardons and commutations, there’s plenty Obama can still do.

How aggressive the administration will be during its final days could depend largely on the outcome of today’s election. Obama and his allies may be less likely to push through environmental regulations and take other controversial actions if Democratic presidential nominee Hillary Clinton defeats Republican nominee Donald Trump. A Trump victory, on the other hand, could spur the administration to be more active.

Even if Clinton wins, "they won’t anticipate hostility," Barry said, "but this is stuff that they’ve worked on, and they’re going to want to get credit for it."

The Obama administration "will do everything they can to get as much of that packaged up as possible," Barry said of Obama’s environmental initiatives — "especially if the Vandals and the Visigoths start sacking Rome," he added, referring to a possible Trump win.

Obama has already designated more monuments than any other president in U.S. history, and many environmentalists are hoping he’ll create several more before departing the White House (Greenwire, Oct. 6).

Monument designations represent "a potent post-election tool for a president to formulate their legacy," Barry said.

Blumm said a Clinton election likely wouldn’t affect Obama’s plans for more monuments, although there might be pressure on a Trump administration to rescind any monuments.

But that seems unlikely, he added. "We’ve never had a monument rescinded," Blumm said, and it’s unclear whether a new president in fact has the power to rescind a monument designation.

Another area where the executive branch can act unilaterally: finalizing so-called midnight regulations — a time-honored tradition practiced by outgoing presidents.

"I would expect to a surge of last-minute regulation," said Jerry Ellig, an expert on regulations and a senior research fellow at the Mercatus Center at George Mason University. "Historically, it almost always happens."

A flood of last-minute rules is "especially big if the presidency switches parties," Ellig said, but occurs even when the White House remains under the same party’s control.

Although many of Obama’s major environmental rules — like the Clean Power Plan — were finalized long ago, experts say smaller rules can still work their way through the system in time.

"Smaller, less important rules that no one has ever really heard of could get adopted quickly," Ellig said.

Either Clinton or Trump will likely carefully scrutinize any rules that haven’t yet been finalized when she or he takes office.

In 2009, one of the first official actions the Obama administration took was to halt all pending George W. Bush administration rules until the new White House team could conduct a thorough review.

Speculation abounds over whether President Obama’s Supreme Court nominee, Merrick Garland, might get confirmed during the lame duck if Clinton wins the White House.

Some Republicans might see Garland as a more moderate choice than a possible Clinton pick — particularly if the Democrats win back the Senate. Obama and his allies could pressure lawmakers to take action to confirm Garland rather than take their chances.

And at NRC, the commission is lacking members on both sides of the aisle. On the Republican side, Senate Environment and Public Works Chairman Jim Inhofe (R-Okla.) has confirmed that his aide Annie Caputo, a former Exelon Corp. executive, is among names being circulated for the Republican post.

Inhofe has said his panel asked the White House to pair a Republican nominee with former Energy Department official Jessie Roberson, whom Obama nominated in July to serve as a Democratic member of the NRC (E&E Daily, May 11).

"I would think if Hillary wins the election today that she might want to have the ability to appoint her own people, but it is always possible that they would work together and move a slate," the lobbyist said.

Another source isn’t expecting action on those slots, given limited external pressure and what appears to be a lack of interest by Senate Majority Leader Mitch McConnell (R-Ky.).

Another time-honored presidential tradition is the lame-duck pardon.

The internet is rife with speculation over whether Obama might use his power to clear Hillary Clinton and her political allies for any potential wrongdoing regarding her use of a private email server. And Bill Clinton took the controversial step of pardoning hedge fund manager Marc Rich on his last day as president.

But pardons or commutations for environmental crimes are possible, too.

In a high-profile case surrounding the two ranchers whose arson convictions sparked the siege of the Malheur National Wildlife Refuge in Oregon early this year, the ranchers said they would ask the White House for clemency.

Dwight Hammond, 74, and his son, Steven Hammond, 47, said they plan to work within the legal system to challenge the five-year sentences they argue are unfair.

"We hope that President Obama will agree with us and with the veteran judge who presided over the trial that the mandatory five-year minimum sentence is far too long for these ranchers," the Hammonds’ attorneys said earlier this year.

The Hammonds’ attorney, W. Alan Schroeder, said today in an email that a clemency petition is expected to be filed "in a few weeks."

But the prolonged occupation that began as a result of their sentences may have hurt any chances they had for receiving clemency from Obama.

The armed occupation — and the recent acquittal of standoff leader Ammon Bundy, his brother Ryan Bundy and others — fueled political outrage on the left.

"I don’t know what he would have to gain by pardoning them," said Blumm of Lewis & Clark Law School. "It may be that the Bundys poisoned the well for them."