Every president since JFK was warned about climate change 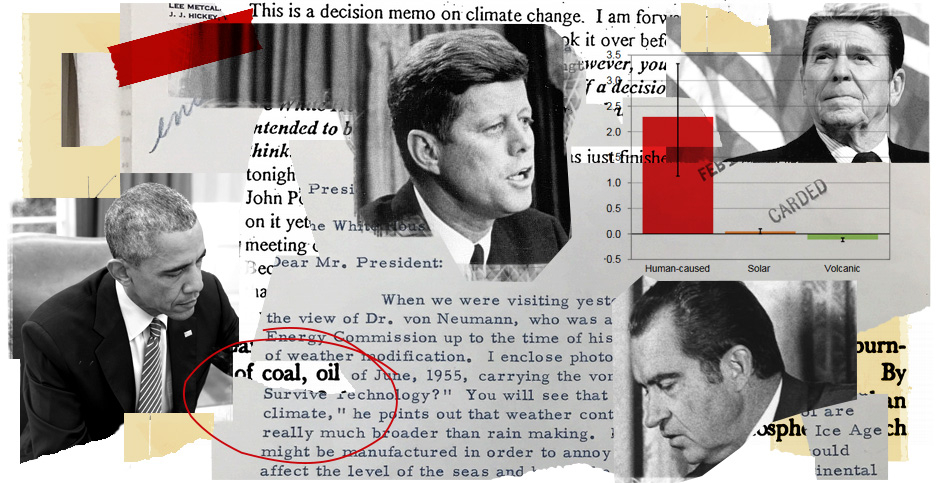 The warnings never stopped. Every president since then has been exposed to similar scientific findings. Sometimes it was called "climatic change," other times it was "air pollution."

The history of cautionary messages with the West Wing is documented in hundreds of records submitted in Juliana v. United States, a court case against the federal government. The files show an arc of steadily improving climate science and a clearer picture of damages, even as presidents diverged on how to address the problem.

Below are excerpts of documents received by the past 11 U.S. presidents.

Former Sen. Clinton Anderson (D-N.M.) met with Kennedy in February 1961 to warn him that people could transform the natural environment. In a follow-up letter, Anderson cited a Fortune magazine article suggesting that Cold War enemies could change the weather to "annoy others."

It was a direct warning about the capacity of humans to alter the atmosphere and an oblique one about a changing climate. The warnings soon grew sharper.

The document, "Restoring the Quality of Our Environment," was the product of dozens of university researchers. It said carbon dioxide levels were creating a pattern of warming.

A section co-authored by Charles David Keeling, the noted climate scholar, placed strong blame on the burning of coal, oil and gas.

"Man is unwittingly conducting a vast geophysical experiment," it said.

By the 1970s, industry and government officials were aware of the air pollution caused by power plants. Staff at the White House Office of Science and Technology Policy drew up plans to research lower-emitting energy sources.

They proposed using a small tax to raise revenue for research by electric power companies.

A memo from the office, dated August 1970, noted that air pollution "is caused almost entirely by the combustion of fossil fuels."

The notion of tinkering with weather patterns and climate systems floated around Washington under President Ford. In 1975, a year into his term, scientists were studying heat-trapping pollution from carbon dioxide.

Ford received a report on weather modification in December 1975. It referred to a global network of sensors tracking the concentration of gases in the atmosphere.

With President Carter in office, the national conversation around climate change was similar to today’s.

Prognoses were dire, and experts warned of severe consequences without significant changes.

"With every passing day the energy problem grows worse," Carter advisers Jim Schlesinger and Stu Eizenstat wrote to the president in 1977, four years after the oil embargo. They suggested a plan to help the environment and to cut back on coal and oil imports.

Yet, their memo gave little attention to climate change. Carbon emissions should be examined more, it said.

Climate terminology began to modernize in the 1980s, and so did the talk from politicians of getting serious about cooling a warming planet.

Research from White House advisers and federal experts — a group called the "ad hoc sub-working group on climate change" — soon warned that there was a dangerous "buildup of carbon dioxide" and other gases in the atmosphere.

"The continuing buildup of these ‘greenhouse gases’ are likely to be the most important cause of climate change over the next century," a draft report from the group said in 1986.

Later, when campaigning for the presidency, Bush said he would address those problems.

Speaking on Aug. 31, 1988, in Michigan, he promised to fight "global warming." He used that term several times.

A decade after seminal congressional testimony from James Hansen, the NASA scientist who helped put climate change before the public eye, the sequence had shifted from diagnosing the problem to solving it.

Clinton supported the Kyoto Protocol, an international climate agreement to cut emissions, in 1998. The Senate never ratified the treaty, but it became a subject of focus inside the White House.

Presidential advisers Gene Sperling and Katie McGinty mulled the economic considerations, and Todd Stern, who would become a key climate adviser under President Obama, wrote the president with a summary of recommendations.

After winning a contentious election in 2000, Bush entered the White House with a moderate record on climate. Many experts felt he had stronger climate credentials than his opponent, Vice President Al Gore, due to his environmental policies as Texas governor.

In a 2001 letter to senators, he disputed the idea that carbon dioxide could be regulated under the Clean Air Act.

The science supporting the core facts of climate change grew stronger under Obama, and the damages of human activity came more clearly into view.

Year after year were among the warmest in recorded history. Ice in the Arctic Ocean receded at ever-increasing rates. And government scientists told the public in increasingly alarming tones of severe risks.

The U.S. Global Change Research Program found in a 2014 report that scientists were confident that human activity was melting ice sheets and raising ocean levels.

Trump, who once called climate change a Chinese "hoax," expressed doubt last month about people’s role in regard to rising temperatures. He also said that climate scientists are politically motivated and that any environmental changes felt today could turn back naturally.

Yet the latest report from government scientists shows that humans are overwhelmingly to blame.