‘Everybody’s kind of waiting for the hammer to fall’ 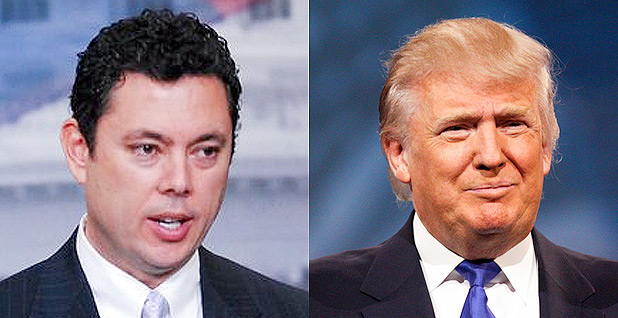 Federal workers are freaking out.

Donald Trump’s election in November sparked concerns throughout the government workforce about the fate of programs the Republican targeted on the campaign trail, like climate change regulations. He also promised a pay freeze and cuts to the federal workforce. And the return of the GOP-led Congress this month ushered in a new wave of fears as lawmakers moved quickly to make it easier to fire federal workers, slash their pay and target their benefits.

Government employees have been fending off these efforts for years and counted on President Obama’s veto pen as a reliable firewall. But that defense will vanish in eight days, and Trump could begin signing workforce legislation that’s been languishing.

"There’s already been legislation that’s going after federal workers. We’re going to see more of it coming up."

At energy and environmental agencies in particular, employees are worried about their budgets getting slashed. Trump and his team have vowed to unravel many of the Obama administration’s signature energy policies and have signaled that drastic restructuring could be in store for agencies like U.S. EPA.

They’ve also been fretting some efforts by the transition team that appeared to target certain career employees, like a questionnaire sent to the Energy Department asking for the names of employees who had worked on climate change programs. The Trump team later disavowed that questionnaire, but that hasn’t quelled workers’ fears.

The mood is "not good," he said. "I think everybody’s kind of waiting for the hammer to fall."

O’Grady, who’s based in EPA’s Region 5 office in Chicago, has a file on his computer titled "Politics: Bad bills," where he keeps tabs on some of the legislation moving through Congress that could impact federal workers.

There’s plenty that he and other union leaders are keeping an eye on these days.

Shortly after returning to Capitol Hill this month, House lawmakers muscled through a rule change that would make it far easier for Congress to propose eliminating federal agency employees or reduce their salaries. The so-called Holman Rule would allow any House member to offer an amendment to any of the 12 annual appropriations bills to limit spending to cut employees or reduce their pay (E&E Daily, Jan. 4).

O’Grady is also watching for legislation from Rep. Todd Rokita (R-Ind.) that was introduced in the last Congress and would create at-will employment status for new federal employees and immediately suspend employees due to misconduct or poor performance.

"Americans are tired of seeing federal employees … maintain employment, at the taxpayers’ expense, after engaging in misconduct, receiving consistent poor performance reviews, and abusing the appeals process," Rokita said last year in a statement. "This bill is a step toward holding federal employees accountable to ensure that citizens are receiving the best service possible."

The top House watchdog, Oversight and Government Reform Chairman Jason Chaffetz (R-Utah), has said worker accountability will be among his top priorities this Congress.

He told The Washington Post this week that his committee’s agenda includes efforts to fire federal employees more easily and to change the retirement system for new employees.

Yesterday, Chaffetz asked agencies across government to respond to reports that they’ve been accelerating hiring for civil service jobs in advance of a hiring freeze Trump is expected to put in place (E&E News PM, Jan. 11).

He and many other Republican lawmakers have long sought to shrink the size of the federal government and hold government employees more accountable. They’ve argued that the current system is pricey, unwieldy, and full of waste, fraud and abuse.

In light of the recent moves led by GOP lawmakers, federal employees, unions and congressional Democrats are preparing to play defense.

Rep. Gerry Connolly (D-Va.), a member of the Oversight panel whose district is packed with federal workers, said in an interview today that employees have "profound grounds to be concerned."

Unlike with some past administrations vowing to cut the workforce and rein in benefits, "there’s no check" this time, he said. With the GOP in control of the executive and legislative branches, and a GOP nominee expected to soon head to the Supreme Court, "federal employees are at the mercy of the vagaries of politics."

Among his most pressing concerns, Connolly said, is the "Cabinet of horrors Donald Trump has put together." He noted that DOE secretary nominee Rick Perry has previously advocated abolishing the agency and that EPA nominee Scott Pruitt has "disavowed large chunks of the mission" of that agency.

"How are civil servants to react to that when you put in charge of the agency people who explicitly disavow the mission of the agency?" Connolly asked.

Connolly said he and other lawmakers will "resist these assaults on the federal workforce with every ounce of resolve that we have." Even though Trump will be president, he said, one man "does not get to dictate across-the-board dismantlement of the mission of the federal government."

Among the principal concerns for workers right now is "whether or not their jobs and their programs will continue to exist," said Jeff Ruch, president of the watchdog group Public Employees for Environmental Responsibility.

He’ll be watching closely when the Trump administration rolls out its first budget proposals, which will likely give a comprehensive blueprint of which programs and agencies have been teed up for cuts.

"We finished December with the highest membership we’ve ever had at AFGE," Cox said. "Many people are walking into union offices saying, ‘I’ve never been a member of a union, but I believe I now need to be.’"

EPA local unions are seeing that boom, too, O’Grady said. The local union in Chicago, for example, is "recruiting fast and furious" because of the incoming administration. The new recruits are signing up due to an array of fears, he said, like threats to EPA’s mission, budget, enforcement capability, pay and benefits.

"Some of the people shocked me; I thought they’d never join," he said.