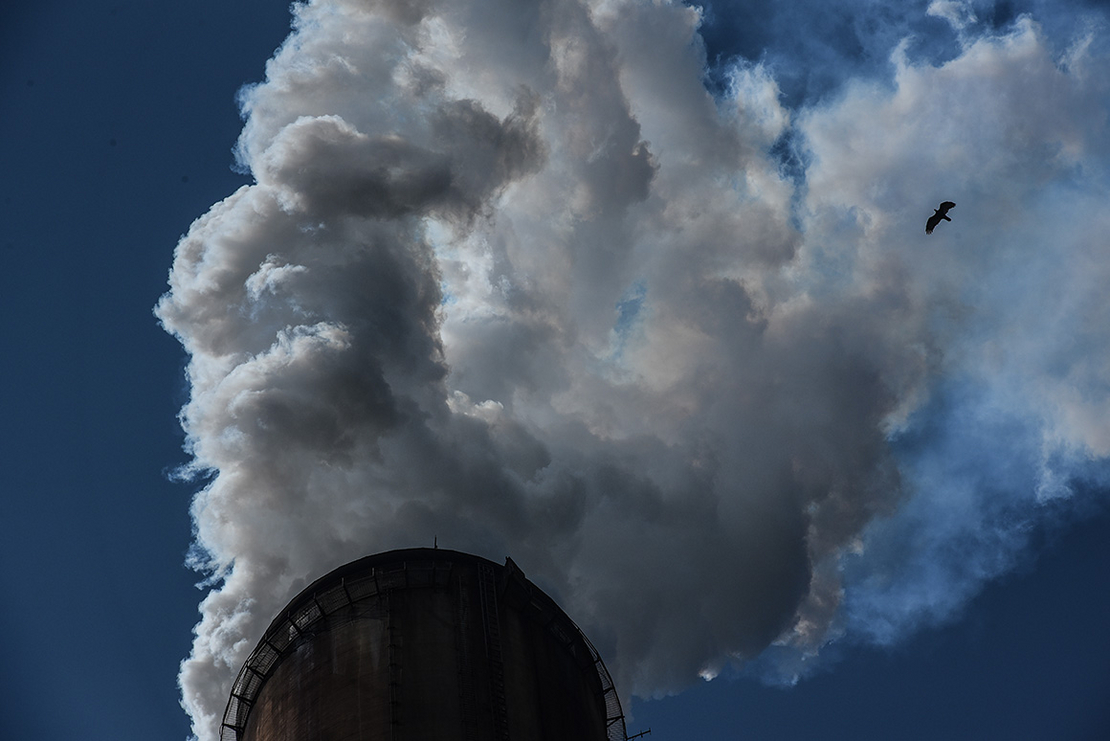 A bird is seen flying by emissions from the Gavin Power Plant in Cheshire, Ohio, on Sept. 11, 2019. Stephanie Keith/Getty Images

Each system has its own strengths and weaknesses. Some are more detailed than others, some are more accurate, some are faster and easier to communicate, and some have more transparent data sources.

It’s a lot of options for policymakers to choose from when deciding how to keep tabs on emissions in their own city, state, country or industry. And it makes it hard to compare different inventories and determine which ones are providing the best results.

That, in turn, makes it hard to keep track of how quickly the world is hitting its climate goals — and where climate action is most urgently needed.

To address these issues, the new report recommends a single global clearinghouse for greenhouse gas information from all over the world.

It wouldn’t necessarily have to be one database using one method. On the contrary, the report suggests that such a clearinghouse could contain a variety of different data repositories from different sources. But they should all be easily accessible in one place, with data presented in standardized formats and with transparent information about how they were compiled.

Such a system could also provide clear, accessible information for decisionmakers on how to evaluate different greenhouse gas accounting methods and how to establish and improve their own methods.

The report was released Tuesday by a special committee convened by the National Academies to evaluate the greenhouse gas information available to policymakers around the world. The committee completed the report in just over two months. It was fast-tracked so that it could be available as a resource during the annual United Nations climate change conference being held in Egypt next month.

“The time has come where it’s really important to recognize that accurate knowledge of human emissions is really required for climate-related policy decisions. And it’s required across all scales,” said Don Wuebbles, an emeritus professor of atmospheric science at the University of Illinois and chair of the committee that wrote the report, at a web conference launching the report Tuesday. “And our aim in this report was to try to set up a better approach for people going forward to be able to look at those issues.”

The report provides a detailed look into the systems that governments, industry groups and other organizations around the world use to calculate their greenhouse gas emissions. There are three main system categories, each of which can contain dozens of different methods and approaches.

The second system is the atmospheric-based, or “top-down,” approach. This system relies on direct measurements of greenhouse gases in the atmosphere, using satellites, aircraft or ground-based instruments.

Atmospheric-based methods often produce more accurate measurements of the gases themselves. But they also contain fewer details about where, exactly, those gases are coming from.

The third system — a hybrid approach — attempts to combine the best of both. Hybrid approaches use both top-down and bottom-up methods, often integrated using models, machine learning techniques or other forms of technology.

Hybrid methods hold a lot of promise, the new report notes. But they’re also relatively new, complex and not as commonly used.

The report also looks at specific greenhouse gas inventories from around the world. The most famous global inventory is the system used by members of the United Nations Framework Convention on Climate Change — the same body that created the Paris climate agreement.

In this system, member countries calculate and report their own emissions, typically using their own bottom-up methods. The amount of detail required in these reports depends on each country’s own capabilities. Emissions calculations require a lot of data, time and resources.

There are also other organizations that independently work to keep track of emissions at the global level. The Global Carbon Project is one example. It’s a consortium of scientists from around the world who monitor the global carbon cycle, using a variety of both top-down and bottom-up sources, and produce regular reports on global emissions.

With so many different organizations independently working on their own goals using their own systems, it’s hard to keep track of which methods are producing the best results.

In recent years, studies have begun to reveal shortcomings in certain methods and reporting systems. Last year, for instance, The Washington Post published an investigation revealing a major gap between the emissions that countries report to the United Nations and the emissions that are actually going into the atmosphere.

Researchers have uncovered similar problems at smaller scales. A study published last year found that U.S. cities tend to underreport their carbon emissions — not necessarily on purpose, but because calculating emissions is a complex and tedious undertaking that often requires more time and resources than local governments have available (Climatewire, Feb. 3, 2021).

And even the most accurate systems can suffer from other shortcomings. Compiling emissions inventories is, simply put, a lot of time-consuming work. The information contained in greenhouse gas inventories is often months or even years out of date. That’s a problem for policymakers trying to design urgent climate policies in real time.

At the same time, researchers are coming up with new and improved methods for emissions monitoring and calculating, the report notes. But while these new methods might circulate around the scientific community, they’re not always quickly communicated to the decision-makers who might want to use them.

Such a clearinghouse wouldn’t necessarily replace the systems that already exist, like the United Nations inventory. But it could help support those inventories by providing the information and methodologies that countries need to develop their own high-quality emissions reporting systems.

“Countries that currently struggle to submit inventories to that process could find both the information needed to assist them in that process and … also find aspects of capacity building by finding lots of information about how these datasets are put together,” said Kevin Gurney, an atmospheric scientist at Northern Arizona University and a member of the committee that wrote the report.

Supporting lower-income countries in developing more detailed emissions inventories could be a key role for the kind of clearinghouse the report recommends. That’s especially important, the report notes, because developing countries are disproportionately affected by climate change, despite having contributed comparatively little to the world’s cumulative greenhouse gas emissions.

The report doesn’t make any recommendations on who should spearhead such a clearinghouse or how it should be organized.

“We looked at the criteria that should go into a clearinghouse, but we didn’t say who specifically should be doing this or what agency or agencies might be considered in doing it,” Wuebbles said. “That’s kind of left to the governments.”

But the committee notes that these kinds of conversations will be relevant at the coming United Nations conference. Under the terms of the 2015 Paris climate agreement, member nations are required to participate in a “global stocktake” every five years — a process intended to evaluate the world’s collective progress on climate change. The first global stocktake is currently underway.

And in the coming years, fast and accurate emissions reporting will be crucial to keeping the world on the right track.

“We’re in a world that’s rapidly evolving, so we really do see a lot of change ahead in the future,” said Annmarie Eldering, a recently retired NASA scientist and a member of the committee that wrote the report. “To my mind, we’re really gonna see a lot of change and movement forward in the years ahead.”