Everything we know about Biden’s mysterious CES 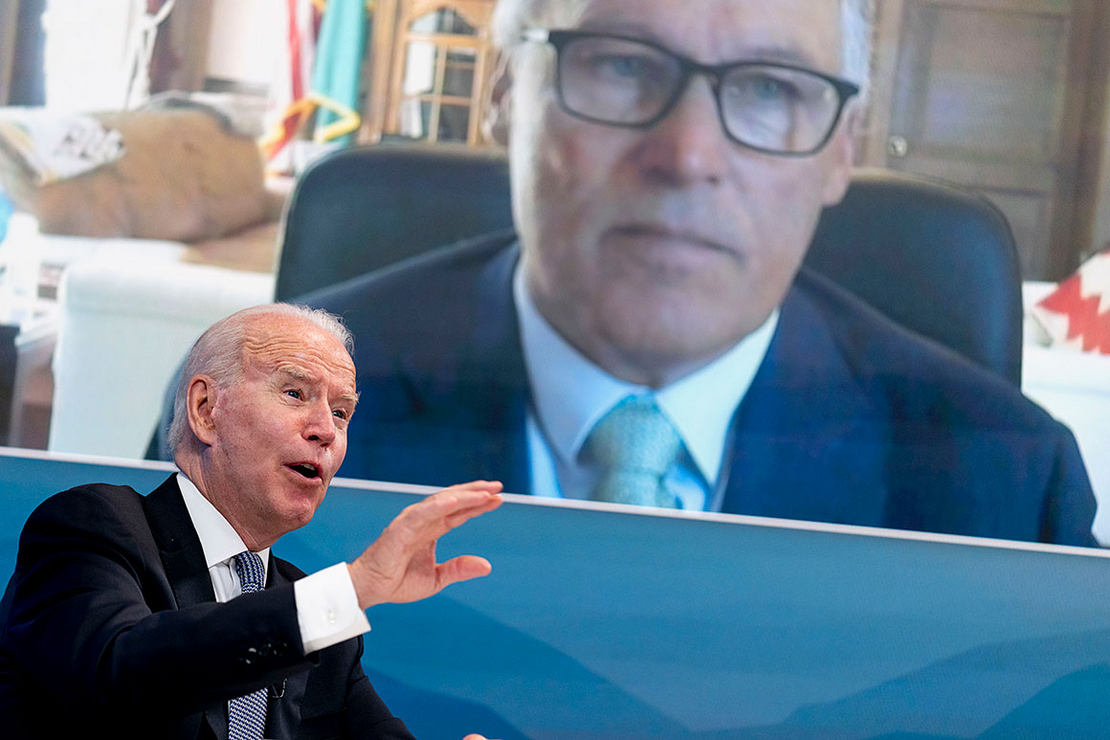 President Obama attempted to curb greenhouse gas emissions with a cap-and-trade program and, later, with regulations on power plants. President Trump went in the opposite direction by trying to subsidize coal and nuclear plants.

The plan, which is included in the $3.5 trillion budget package outlined by Senate Democrats, might be the pillar of Biden’s climate agenda and help the country halve emissions by 2030. A series of studies have found that reducing power sector emissions 80% of 2005 levels would achieve more than half of Biden’s needed emission reductions.

Here’s what’s known about the plan, how it would work and what its impact might look like.

Let’s say this up front: There’s a lot we don’t know about the plan. All that Democrats have agreed to is that a CES will be part of their budget talks. One Senate staffer involved in the discussions said last week that those talks are “in limbo.” Basically, lots of people are talking about it, but no decisions are being made.

What’s on the table this year is more like a grant program.

“It is a budget line item to provide incentives to utilities to add clean energy,” Smith told a webinar hosted by Our Energy Policy and the Electric Power Supply Association on Wednesday.

Utilities would get paid to expand their sales of clean electricity each year. If their sales failed to meet a certain threshold, they’d have to pay a tax. The emphasis on paying companies to install clean electricity is the reason advocates of the idea have a new name for their proposal. They’re calling it the Clean Electricity Payment Program, or CEPP.

Part of the CEPP’s effectiveness will depend on how much utilities get paid to increase their clean electricity sales. The flip side is how much they would have to pay in taxes if they fail to meet the law’s clean electricity requirements.

Both those factors depend on this important detail: the law’s annual target for clean electricity sales.

All those details are still being hammered out by Senate negotiators.

What is clean electricity, exactly?

In the context of this proposal, clean electricity includes anything without emissions. So nuclear, hydro and fossil fuel plants with carbon capture would all qualify, as would traditional renewable energies like wind and solar. This is called a technology neutral approach.

The Edison Electric Institute, a trade association representing investor-owned utilities, signaled that it would support a clean electricity standard, provided it’s technology neutral and provides some role for natural gas. Some progressive environmentalists have bristled at the inclusion of nuclear and CCS.

The backstory of CEPP

In recent years, some states have stepped up their ambitions. Roughly a dozen now require utilities to eliminate greenhouse gas emissions from their power plants by midcentury. Most of those employ technology-neutral standards like the CEPP.

But there is a key difference between traditional RPS programs and the CEPP. Where RPS programs impose regulatory requirements on companies, the CEPP is basically a grant program. So no utility would face a penalty for failing to reach 80% clean electricity sales by 2030.

Let’s take two of America’s largest utilities to show how this would work in practice. Xcel Energy Inc. is a Minneapolis-based utility that serves consumers in eight states across the Great Plains. Historically, it was a large coal burner, but in recent years it has pursued an aggressive buildout of wind. In 2020, the company reported that 47% of its electricity came from carbon-free sources.

Southern Co. is based in Atlanta and serves Alabama, Georgia and Mississippi. It, too, is a heavy coal burner. While it burns substantially less coal than it did a decade ago, the utility has not transitioned to clean sources at the same pace as Xcel. In 2020, it reported that nearly a third of its electricity came from carbon-free sources.

Under the CEPP, Xcel would begin with a clean electricity baseline of 47%. If it succeeded in growing its clean electricity sales by 4% annually, it would derive about 83% of its power from zero-carbon sources by 2030. Southern Co., on the other hand, would start at 33% and end the decade just shy of 70%.

Supporters say this is an advantage of the CEPP approach. In a traditional RPS, Southern Co. would be penalized for failing to meet Biden’s 80% clean electricity goal in 2030. In this model, the utility would not be penalized.

“Retail suppliers that start below the national average are not expected to catch up, and those already meeting very high shares are assigned a smaller annual increase,” said Jesse Jenkins, a Princeton University professor who has provided input on the plan, in an email. “In the end, the 80% target will be met on average, with some retailers supplying a higher percentage of clean electricity than others.”

Why do it this way?

The likelihood of any Republican senators endorsing a clean electricity standard, or any major climate bill, is slim. That has led Democrats to pursue major climate legislation through budget reconciliation, the parliamentary procedure that allows a spending package to pass with a simple majority vote.

By making the CEPP a grant program, the proposal is more likely to qualify for reconciliation under Senate rules.

Supporters say structuring the plan as a grant program has several benefits. For one, it would be paid for with tax revenue rather than through electricity bills. They argue that is a more equitable approach to transitioning the grid because rich people pay more in taxes, whereas the poor spend a greater share of their income on electricity.

This is the type of bureaucratic detail that can seem boring, but it has big implications in the real world.

It’s easiest to explain this with an example. Say you live in Washington, D.C. Chances are you receive a monthly electric bill from Pepco, which buys power on the wholesale market, called the PJM Interconnection, and delivers it to your house.

A separate company actually owns the power plant that generates the electricity. In D.C., there’s a good chance that at least some of the electricity is being produced at the Calvert Cliffs Nuclear Power Station in eastern Maryland, which is operated by Exelon Generation.

This is called a restructured electricity market, and it’s a model used by roughly two-thirds of the country. The remaining third is served by regulated monopolies. You can find that approach by traveling over the Potomac River to Virginia, where residents likely get a monthly electric bill from Dominion Energy Inc. Dominion owns power plants and transmission lines and delivers electricity to homes.

Here’s why this is important: In the CEPP model, Dominion and Pepco would be eligible to be paid or taxed by the government because they have retail electricity sales. Independent power producers like Exelon Generation would not.

Independent power producers don’t like the bill as crafted. They’re concerned about being cut out of the program.

Remember that whole thing about Exelon Generation and Pepco? They are both subsidiaries of Exelon Corp.

Well, independent power producers worry that the CEPP would discourage corporations structured like Exelon from buying power from outside generators. They believe Pepco, which would be paid for delivering more clean energy, could use that government revenue to strengthen its sister company, Exelon Generation.

Independent power producers, which wouldn’t get direct payments from the CEPP because they sell their power to utilities instead of residents, say the legislation could reduce competition in the energy market.

“It is not clear how IPPs would be included at this point, and that I think that is a concern,” said Brian George, director of strategic policy and government affairs at the Electric Power Supply Association, a trade association representing independent power producers. “If we’re going to have a chance of meeting these aggressive goals and ultimately benefit consumers and enable an economically just and reliable transition, the program has to be designed so all entities can participate.”

Independent power producers generate most of the country’s renewable energy. In 2020, they were responsible for 89% of large-scale solar output and 85% of all other renewables, excluding hydro, according to U.S. Energy Information Administration figures.

CEPP supporters say that criticism misses the mark. For one thing, they note that the CEPP is one piece of a wider climate package. Democrats have also proposed extending tax incentives for wind and solar developers, which would benefit independent power producers.

The CEPP’s focus on retail electric sales, meanwhile, is no different from existing RPS programs. So in that sense, it would preserve the status quo in electricity markets, supporters say. Beyond that, they say RPS programs have created massive demand for independent power producers’ electricity.

“The CEPP permits any of those options so that it can work with the diversity of industry structures and degrees of wholesale competition across the 50 states,” said Jenkins, the Princeton professor. “Given that IPPs dominate today’s supply of clean electricity projects, I can’t see why increasing demand under the same market structures as prevail today would somehow disadvantage them. That doesn’t make any sense. They’ll no doubt continue to supply the bulk of projects in this much larger market for clean electricity.”

Most decarbonization studies estimate America needs to green its power supply to have any chance of meeting Biden’s climate targets and putting the U.S. on a pathway for net-zero emissions (Climatewire, July 12).

Lawmakers haven’t revealed what the annual target for clean electricity sales would be under the CEPP. But we can take an educated guess.

Roughly 40% of the nation’s power comes from carbon-free sources like nuclear, hydro, wind and solar. The U.S. will need to increase its clean electricity sales by an annual average of 4% to reach Biden’s goal of 80% clean power by 2030.

For context, the share of electricity from zero-carbon sources has grown from 32% in 2011 to about 40% in 2020. That’s a little less than 1% growth annually, according to the Energy Information Administration.

That would provide more than half the overall emissions reductions the U.S. needs in order to cut greenhouse gas levels 50% of 2005 levels by 2030.

“The policy is not designed to ‘cut emissions’ — like other CES/RPS policies it is designed to increase clean power,” Stokes wrote in an email. “CEPP will usher in the largest investment and build-out of renewables seen to date and will catalyze the reduction in emissions throughout the power sector.”