EVs: The next grid battery for renewables? 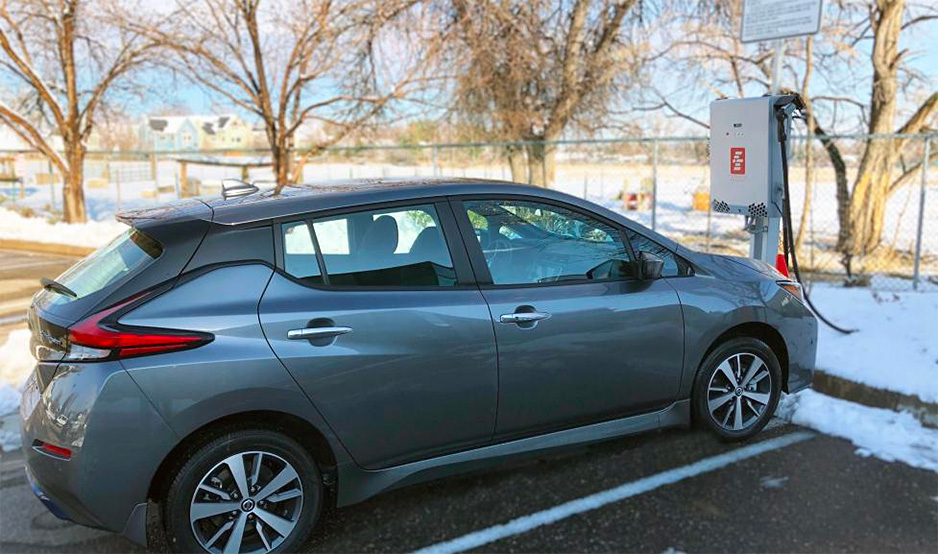 The city of Boulder, Colo., is working to promote electric vehicle adoption. bouldercolorado.gov/City of Boulder

Around noon on Fridays, as a yoga class heats up at a recreation center in Boulder, Colo., electricity flows in from a Nissan Leaf plugged in behind the facility, cutting the city’s utility bill by about $270 a month, or roughly what it costs to lease the car, Boulder official Matthew Lehrman says.

The results of this experiment are making a potent point about the nation’s clean energy future, demonstrating vehicle-to-building power supply for controlling electricity costs and extending the reach of wind and solar power, according to David Slutzky, founder and chief executive of Fermata Energy, developer of the software that manages the power transfer.

EVs — battery-driven and plug-in hybrids — are projected to grow from about 5 percent of the U.S. car market this year to 30 percent or even one-third by 2030, according to a number of estimates, assuming EV costs shrink and charging station numbers grow.

And by 2025, not just the Leaf but nearly all new EVs are expected to come with bidirectional charging capability, Slutzky predicts, equipping them to be backup power sources when not on the road or being recharged overnight.

The potential of the technology has some high-level supporters, including Jigar Shah, head of the Energy Department’s Loan Programs Office, and John Isberg, a vice president of National Grid, which has electricity customers in New York and New England and has drawn on EV battery capacity last summer to cut peak demand in a partnership with Fermata Energy.

And a division of Siemens AG is working with Ford on a custom bidirectional electric vehicle charger for the Ford F-150 Lightning pickup truck, allowing the truck to provide power to homes and, in the future, the grid itself, the companies said.

“Electric Vehicles like most vehicles are parked 96 percent of the time,” Shah said recently on social media. “If they are plugged in at scale they can be a valuable grid resource.”

Still, questions about the viability of vehicle-to-grid-technology have persisted for years.

Last year, George Hilton of IHS Markit wrote in a piece in pv magazine that there are both short- and medium-term barriers, describing a need for the industry to overcome “low customer value and concerns over battery degradation,” for example. He also pointed to issues for the technology such as licensing difficulties. In 2018, Greentech Media quoted an analyst as saying “V2G is intuitively appealing for all the obvious reasons, but it’s not a slam-dunk, at least not in the short term.”

“If it’s configured correctly and you can harness all the EV battery power for the grid, imagine the potential,” not just to reduce peak demand but to help stabilize the grid around the clock, said former Federal Energy Regulatory Commission Chair Jon Wellinghoff.

A report by the Pacific Northwest National Laboratory in January listed EVs among the primary customer-owned energy resources that could become “shock absorbers” helping grid operators manage large volumes of renewable power and get through grid emergencies (Energywire, March 16).

“Auto manufacturers see this is really appealing. Even though we’re not there yet, the industry is moving toward bidirectional,” said Kyri Baker, an assistant professor on the engineering staff at the University of Colorado, Boulder.

Her research with colleagues looks even further ahead to the use of machine learning and artificial intelligence to understand in much greater detail how customers use EVs and their own energy systems, and to use these patterns to increase the efficiency of grid operations.

“How do we automate a lot of these things?” Baker said.

The primary issues ahead involve human factors more than technology, said Slutzky, the Fermata company founder, who with his law degree is also on the faculty at the University of Virginia’s engineering department.

“We have the technology. We needed chargers, and we needed vehicles” equipped for two-way charging, Slutzky said. His company hopes to announce partnerships with leading charging station manufacturers beginning this summer.

Fermata’s cloud-based software system manages charging operations to maximize customer savings, Slutzky said. “We tell the car to charge or discharge (into a building or the grid itself) based on the revenue opportunity.”

In Boulder’s case, the rec center’s peak demand for power in summertime is typically in midday, when the swimming pool is full and the air conditioning is running hard, Lehrman said. That’s also when wholesale power prices are likely to be at peak levels.

The Leaf vehicle assigned double duty is parked and plugged in at the rec center when it’s not on the road. When connected at midday, its stored energy reduces the facility’s peak demand for grid power, and with that, lowers the demand charge assessed by the utility.

“An EV has multiple uses, one of which is driving. It has to be available to the driver when they want to drive it,” he said.

Depending on how motorists use their EVS, they may or may not be available when their stored electricity is most valuable, so vehicle-to-building systems have to be able to differentiate between customers who will share their vehicles for a price and those who won’t, Slutzky said.

Charging control algorithms must also meet the requirements of auto manufacturers, which are on the hook with battery warranties and won’t risk having a control system abuse a battery and shorten its life, Slutzky added.

“We have to have our system designed so we don’t interfere with the mobility use and we don’t degrade the battery,” Slutzky said.

And perhaps most of all, he acknowledges, utility operators will have to trust that customers’ vehicle battery energy will be there in cases when it’s promised and needed.