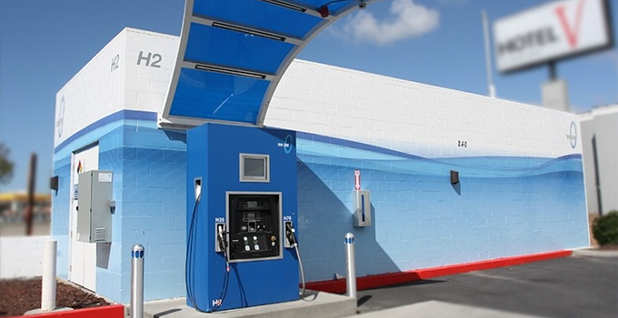 A new mandate in California could create a market for hydrogen fuel-cell trucks and buses, but little infrastructure has been built for those vehicles. A hydrogen fueling station in San Francisco is pictured. California Fuel Cell Partnership

A historic mandate in California for zero-emissions trucks includes a carve-out that could be met by hydrogen fuel-cell vehicles, but experts say it’s far from clear the technology will benefit.

The Advanced Clean Trucks rule, approved Thursday by the California Air Resources Board (CARB), creates the nation’s first market for zero-emissions vehicles that belong to the medium- and heavy-duty weight classes, ranging from delivery vans to long-haul semis. Beginning in 2024, a rising proportion of manufacturers’ sales will have to be zero-emission types — a category that could include battery electrics or hydrogen fuel cells (Climatewire, April 30).

The Trump administration has sought to revoke California’s authority to set stricter emissions controls than EPA.

If California and its allies prevail in court, the new mandate could spread. Seven states and the District of Columbia said this winter that they planned to adopt California’s rule, as they already have with a passenger car mandate. Earlier this month, New Jersey’s governor also signed a law creating a task force that will draw up plans for supporting fuel-cell vehicles.

Under the rule, 30% of all long-haul tractors and contractor work trucks sold in the state, and half of all beverage trucks and other large delivery vehicles, would need to run off batteries or fuel cells by 2030.

Particularly for the heaviest classes of trucks, "fuel cells are potentially much more advantageous than batteries," he said.

That belief is widespread among many clean transportation analysts, who say fuel-cell long-haulers and other semi-trucks will be able to fuel up faster and travel farther than battery electric kinds, without requiring complicated and time-consuming upgrades to the grid. By about middecade, the total cost of ownership could be roughly the same, according to a Deloitte study from this year, which projected that fuel cells would surpass diesel trucks on cost by 2028.

But no manufacturer is producing fuel-cell trucks at scale. The earliest models are expected to roll out around the time that California’s rule would go into effect. While the state has long incentivized the construction of hydrogen stations, most were built with light-duty cars in mind, meaning a separate backbone of fueling stations would need to be constructed.

The utility sector also is already moving to build out chargers for battery electrics, including for heavier classes of vehicle. A consortium of nearly a dozen West Coast utilities released a joint plan earlier this month to build an interstate network for battery trucks in Oregon, Washington and California, and the main investor-owned utilities in California won approval last year to spend hundreds of millions on chargers for those heavier uses.

Demand for light-duty electric cars — not to mention for phones and laptops, which use lithium-ion batteries — might also translate into faster development of battery trucks, giving them an edge over fuel cells even in the heaviest weight classes, say advocates.

"I’m not in the camp of ‘long-haul is definitely going to be fuel cell.’ Both technologies are improving and undergoing refinements that people didn’t expect or anticipate," said Jimmy O’Dea, senior clean vehicles analyst at the Union of Concerned Scientists.

Some energy systems analysts have described hydrogen as a possible linchpin for the decarbonization of multiple sectors. If hydrogen could be separated from water using renewable electricity, they say, it could become a zero-carbon fuel that powers fuel-cell cars and replace fossil fuels as a heating source for heavy industries.

It also could be a form of energy storage used to generate electricity. Last week, the Energy Department announced it would invest up to $100 million in hydrogen and fuel-cell technologies over the next five years, citing "the potential to enable resiliency, energy security, and economic growth across multiple sectors."

At present, though, nearly all of the country’s hydrogen is produced via steam reforming, which involves either natural gas or coal. Electrolyzers, the machines that split hydrogen from water using electricity, are still too expensive to make renewable hydrogen a cost-effective option.

That means if states outside of California were to adopt a sales mandate for fuel-cell trucks, they might face questions about the environmental profile of their hydrogen. In California, 33% of the fuel in hydrogen stations has to come from renewable sources, with most of that 33% derived from biogas. No other state has a similar law.

Amgad Elgowainy, a senior energy systems scientist at Argonne National Laboratory, said that even if the hydrogen were derived from natural gas, a fuel-cell truck that traveled a relatively short, urban route would likely have lower greenhouse gas emissions than a diesel version.

But that might change if the two trucks were traveling long distances on a highway, where diesel engines would probably have an advantage, he added.

When pitted against battery electric versions of long-haul trucks, said Elgowainy, the cost of the fuel itself is likely to be a "dominant" factor in determining the lifetime cost for fleet operators.

"In my mind, the biggest question is how fast — and how economically — can you develop the infrastructure for either one?" he said.

Overall, about 230 to 370 heavy-duty hydrogen stations would be necessary in California by 2030, if fuel cells made up half of all zero-emissions truck sales by then, according to the California Hydrogen Business Council. "That would be even less if the stations were to be scaled appropriately at key infrastructure points," the group told CARB in an April letter.

The emergent fuel-cell industry is eyeing the target. Nikola Corp., a prominent startup that has inked deals to supply Budweiser with its delivery trucks, plans to build 700 refueling stations across North America by 2028. And last year, a consortium of companies that included Toyota, Shell, Hyundai and France-based Air Liquide signed a memorandum of understanding to develop standards for heavy-duty fueling stations (Climatewire, Sept. 12, 2019).

A second, follow-up mandate to be studied by CARB — regulations that would require fleet operators to buy the zero-emissions trucks that the manufacturers produce — will be "very much needed," he added. "Right now, there’s a sales requirement. That doesn’t mean anyone’s going to buy them."

"This is a start," Bouwkamp said of the Advanced Clean Trucks rule. "It helps."

Providing incentives and benefits in California "doesn’t really create a sustainable market," he added. "You need more states to do this. Ideally, it’s the whole U.S."