Ex-administrators to lawmakers: Let us help with oversight 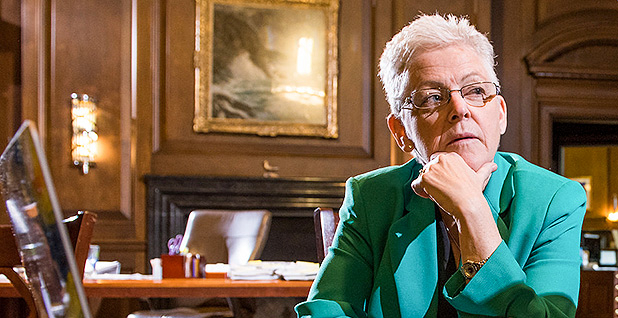 A host of former EPA administrators, including Gina McCarthy, are pressing lawmakers to do more oversight of the agency. EPA/Flickr

Seven former EPA administrators have offered to help Congress with oversight of the agency.

In a letter obtained by E&E News, the ex-agency heads from Democratic and Republican administrations said they were ready to give guidance to lawmakers.

"We are united that there has never been a more important time for us to put aside our differences and advocate collectively for public health and the environment. Time is of the essence, and much is [at] stake," they said in the April 8 letter, sent to House Oversight and Reform Chairman Elijah Cummings (D-Md.) and Rep. Jim Jordan (R-Ohio), the panel’s ranking member.

"As you go about creating an oversight strategy and a path forward, we would like to convey our personal willingness to connect you with resources on substance and sounding boards on priorities. Longer term, we look forward to sharing ideas on an affirmative path forward for EPA."

The former administrators urged the lawmakers in the letter to affirm the "bipartisan" mission of EPA; focus on "the most significant" public health and environmental risks; support "rigorous consensus science, economics and engineering" in EPA decisions; concentrate on "substantive" issues dealing with policy, management and enforcement; and look ahead to establish a foundation for better environmental management.

"We are willing and eager to be a resource on any number of pressing issues under your consideration. There are many areas that are ripe for oversight and are consistent with the suggestions mentioned above," they said.

In an interview with E&E News, Reilly, who served as head of EPA during the George H.W. Bush administration, said the former administrators wanted Congress to take notice of what was happening at the agency.

"There are a lot of changes at EPA," Reilly said, including budget cuts proposed annually by Trump to reduce the agency’s budget by about a third as well as reworking the Science Advisory Board and its membership.

"It seemed we ought to indicate and encourage the Congress to take notice of this," he said.

Browner, who was President Clinton’s EPA administrator, said in an emailed statement that she signed the letter because she believes in EPA’s mission.

"Environmental protection isn’t a partisan wedge issue, as you can see from the fact that so many former administrators — Republicans and Democrats — signed on," she said. "I believe what is happening at the EPA under this administration is devastating for our health and environment."

Ruckelshaus, EPA’s first administrator, who later returned to serve as head of the agency during the Reagan administration, said in an interview that he signed the letter because he believes the Trump administration was not supportive of EPA.

"Well, because it is very clear that this administration doesn’t believe in the fundamental mission of the agency, and we wanted to help set up some principles for them to follow in determining what they concentrate on," he said.

There are 10 living former EPA administrators. Only three of them did not sign the letter sent to lawmakers — Mike Leavitt and Stephen Johnson, who led the agency during the George W. Bush administration, as well as Scott Pruitt, who resigned from EPA last July facing allegations he had misused his public office.

The letter was written on Environmental Protection Network letterhead. EPN, launched in January 2017, is a network of EPA alumni who defend the agency’s mission and have often pushed back against EPA’s recent moves to pull back regulations and shrink its size under the Trump administration.

The letter has been shared widely on Capitol Hill. Bonnie Bellow, an EPN spokeswoman, said, "The letter was sent to the chairmen and the ranking members of all the House and Senate committees that deal with EPA."

It seemingly helped spark a future congressional hearing, as well.

On June 11, the House Energy and Commerce Subcommittee on Oversight and Investigations plans to hold a hearing with four of the ex-EPA heads who signed the letter (E&E Daily, May 17).

Reilly said Rep. Frank Pallone (D-N.J.), chairman of the Energy and Commerce Committee, referenced the letter when he asked the former administrator to testify.

An Energy and Commerce Committee spokesperson confirmed to E&E News that the panel received the same letter on the same date.

The spokesperson said the committee has been conducting "rigorous oversight of this EPA." Since Democrats took control of the House, the panel’s members have held several hearings dealing with EPA, including on the agency’s proposal to reopen the justification for its Mercury and Air Toxics Standards as well as its management of chemical risks and enforcement actions.

"These former administrators are uniquely qualified to offer perspective and guidance as we continue those oversight efforts," said the spokesperson.

Reilly said the former administrators wanted to emphasize that EPA has long had a tradition of protecting the environment.

"It is an effort to remind people that there has been a continuous commitment among many of us to science, environmental protection and regulatory philosophy," he said.

Ruckelshaus said he was worried about EPA not staying true to its mission. "We just wanted to remind them of that. Somebody is watching," he said.