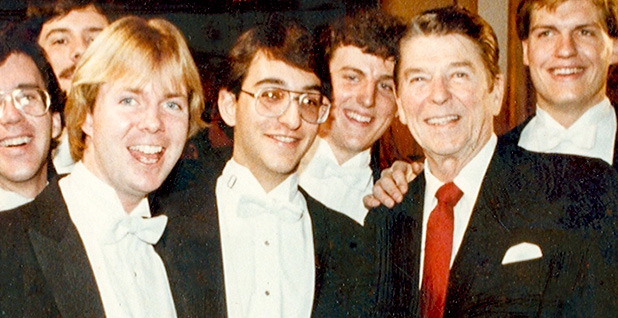 But Connaughton, who held that job for most of Bush’s two terms, isn’t sweating Hartnett White’s nomination.

"If you’re doing your job at the CEQ right, you’re parking your own view at the door for the issues you’re handling," Connaughton said. "I wish it were otherwise, but the reality is the president has his view, and many people that work with him have that view."

Connaughton, 56, led CEQ from 2001 until 2009 under Bush, elevating the office’s profile and cobbling together an energy and climate strategy despite widespread criticism of the administration’s decision to steer clear of the Kyoto climate accord.

Topping Connaughton’s resume is Bush’s creation of four Pacific marine national monuments covering 330,000 square miles of coral and marine habitat, the largest area of ocean conservation in the world at the time.

After Bush left the White House, Connaughton went on to serve as the executive vice president and senior policy adviser at the nuclear giant Exelon Corp. He’s now the CEO and president of Nautilus Data Technologies and an adviser for Jay Faison, Republican mega-donor and self-styled promoter of "conservative clean energy." Connaughton was also recently rumored to be considered for Cabinet positions under Trump.

The father of two recently spoke with E&E News about his time at CEQ, climate "proxy" fights and his grandfather’s Irish rebellion.

When did you meet Hartnett White?

When she became chair of the Texas Commission on Environmental Quality in 2003. She came to visit me early on. We had tons of issues, we were dealing with energy, clean air and natural resource issues.

Is she up for the job?

Kathleen White is certainly highly qualified. She has the depth and breadth of experience and longevity to perform the job well at CEQ. She very effectively served in a leadership role in Texas during a time when the state’s economy was booming.

Are you happy with the Trump administration on energy and the environment?

There is a significant chunk of President Trump’s agenda I’m fully on board with. Energy projects, for example. I think the importance of new and modern infrastructure is paramount.

Apart from that, the reality is … the portfolio of action has been slow because they don’t have appointees in place. EPA still doesn’t have a deputy, there’s no CEQ chair, there’s no Office of Science and Technology Policy director. Until you have personnel, you can’t advance the ball.

CEQ had 40 employees when you ran the office. Now it’s 29. Is the office understaffed?

From what I can tell, they staffed it up even without a chairman, so that’s impressive, actually. And they have some very capable people. Mary Neumayr is the acting chair, and [George] David Banks, he worked for me for years after years with the State Department. You don’t hear much about them because they’re just going about their business.

What are your thoughts on anthropogenic climate change?

I accept the science as it’s presented to us. Science in the climate arena is as substantial as the science that underlies any number of environmental challenges. It’s a serious issue that deserves a serious and effective response; I’ve always had that view. All the way back to ’91 when I first rode into this area.

I believe more aggressive action on carbon abatement is warranted, and I don’t think the Paris Agreement or the Clean Power Plan are adequate to the task. I’m not a fan of the Clean Power Plan; that’s where I have some alignment with the current administration. But I’m not a fan because I don’t think it’s effective enough. It’s not a good method by which you want to achieve some substantial investments.

Where do you see areas for collaboration with the Trump administration?

Does it frustrate you when conservatives reject mainstream climate science?

Where I am frustrated is climate change is an important issue, but it’s not the only issue. Over the last 15 years, it’s eaten up a lot of air space to the detriment of other environment and natural resource protection priorities that have immediate, real impacts on people today.

As an undergraduate at Yale, you were active in the theater. What was your favorite role?

My freshman year in college, I was cast as Bert the chimney sweep in "Mary Poppins." I did 17 shows, but that sort of set me off.

When we were going through the final process of doing the big marine conservation areas, these massive marine national monuments, we had to go through very Byzantine processes. We were five years through the process, and it was going to take an additional two.

He said, "Get the people who know how to put a national monument together, let’s take a look at this record." It was a great moment to say, "Let’s get this done." That allowed us the time to designate three more monuments.

Could those monuments be scaled down under Trump?

I’m hopeful the original four decisions remain intact, and I’m hopeful that most of what Obama did remains intact. To the extent there may be some pullback from what Obama did, I’ll be interested to see what the foundation for that decision might be.

What’s something people may not know about you?

My grandfather, Patrick Connaughton, was one of the original rebels in 1916 that set the spark of the Irish rebellion and, ultimately, freedom of democracy for Ireland.

It was the Easter Rising of 1916. A very small group of them took over this general post office run by the British in Dublin; he was jailed. He set the spark for Irish freedom.