Ex-chiefs on Trump-led agency: ‘This trend must be reversed’ 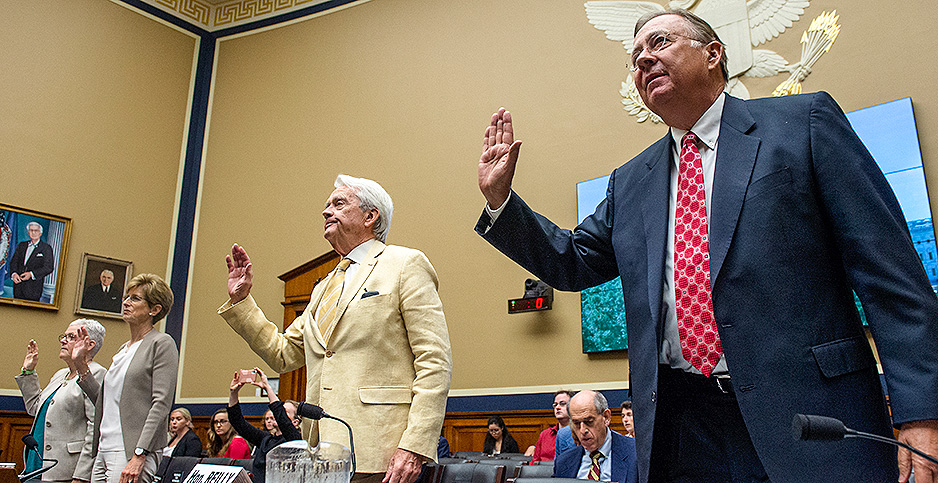 Four former EPA administrators yesterday warned lawmakers about the direction the agency is taking under the Trump administration.

Speaking before the House Energy and Commerce Subcommittee on Oversight and Investigations, the ex-agency chiefs — three of whom served under Republican presidents — used stark language to describe current EPA policies and operations, and they pushed for more agency oversight.

Christine Todd Whitman, the former Republican New Jersey governor who led EPA from 2001 to 2003 under President George W. Bush, said she was "deeply concerned" about the risk posed to environmental progress by the current administration. She pointed to an American Journal of Public Health study published last year that found the Trump administration had shifted EPA toward industry interests.

"It skews policymaking away from EPA’s mission and diminishes public confidence in its decisionmaking. This trend must be reversed."

Along with industry influence, worries over how EPA treats science, including its Science Advisory Board; its declining workforce numbers and morale; and a retreat from addressing climate change pervaded the hearing.

Lee Thomas, EPA’s administrator during President Reagan’s second term, compared this time at the agency to when it was led by Anne Gorsuch Burford early on during part of Reagan’s first term. Thomas was part of a new management team who steadied the agency when Burford resigned in the wake of scandal.

"There was a deregulatory agenda. There was an attack on science at many levels as far as the agency is concerned and a debate going about how to get scientific input and should you have scientific input. There were major requests for budget cuts of EPA. There was a division between political and career staff. The allegations of inappropriate contacts by the regulated industry. There was a lack of transparency about how the agency was making its decisions," Thomas told lawmakers.

"Does that all sound familiar? Well, there is an awful lot of that going on today."

William Reilly, President George H.W. Bush’s EPA administrator, advised lawmakers to examine the language of EPA when explaining its moves to roll back environmental rules, like standards for mercury, methane and coal ash.

"Look at the language that justifies and explains those measures. Look for the environment and health and ecology as a priority. They are invariably presented in terms of their economic advantages," Reilly said.

Gina McCarthy, who led EPA from 2013 to 2017 under President Obama, was blunt in her testimony.

"I’m here to remind the political leadership at EPA that what they do matters, and it’s time for them to stand up and do their jobs," McCarthy said of today’s EPA. "Just do your jobs."

The former administrators lamented how EPA has backed away from climate change, which had been a major priority under Obama. McCarthy talked about her grandchildren in her testimony.

House Democrats shared many of the former administrators’ concerns about the agency.

Rep. Frank Pallone (D-N.J.), chairman of the Energy and Commerce Committee, pointed to the agency reopening its justification for the mercury rule as well as weakening auto fuel efficiency standards. In addition, "extreme cuts" have been proposed for EPA’s budget that would eliminate programs and cut funding for tribes and states.

Yesterday’s hearing came about after seven former EPA administrators signed onto a letter this April sent to lawmakers, including to the committee. In that letter, they said "time is of the essence" and areas at EPA were "ripe for oversight" (E&E Daily, May 22).

Republicans often criticized the agency as they questioned the former administrators. Rep. Michael Burgess (R-Texas) said EPA has a history of being overly aggressive.

"We are trying to put a lot on this administration, saying they don’t follow a disciplined process," Burgess said. "Unfortunately, that has been some of the track record of the Environmental Protection Agency."

"Under her leadership, I think the EPA went rogue," McKinley said. "If EPA had just done its job, the power grid would not be at risk today."

McCarthy later responded that she was proud of the agency’s mercury rule and thought it was drafted correctly.

"I don’t think it has anything to do with any instability in the grid that I have certainly read about," she said. "But it should be something we should celebrate because we have healthier kids today, we have fewer fish advisories, and we made a difference with that rule."

No Trump administration official spoke at yesterday’s hearing. Asked if the agency was invited to testify, EPA spokesman Michael Abboud said, "No."

EPA Administrator Andrew Wheeler traveled yesterday on Air Force One to tour a local ethanol plant in Iowa. He tweeted from his EPA account a story about how the agency had cut 40 regulations for savings of $3.6 billion.

After the hearing, Rep. Diana DeGette (D-Colo.), the subcommittee’s chairwoman, told reporters that it was historic.

"I’ve been on this subcommittee for over 20 years," she said, "and I’ve never seen a situation where four former EPA administrators, three Republicans and one Democrat — I think we had even more signing the letter — would come in and sound the alarm the way they have today."

‘Not a zero-sum game’

"They characterize things as jobs versus the environment," Thomas said. "There’s 50 years of history that basically says that’s not a trade-off. In fact, we’ve had a good economy and environmental protection progress for 50 years."

"It’s not a zero-sum game," Whitman said. "We’ve gone way beyond that understanding. We know we can do and must do both. We have proven it in the past, we’ve done it in the past, improved our environment and watch our economy grow."

McCarthy joked that the hearing was a change from her prior experience on Capitol Hill.

"It was so much fun not to be the center of attention, to be very honest with you. I got to sip my water and listen," McCarthy said, adding it was terrific to join her Republican colleagues who once ran EPA.

"Frankly, when you have colleagues like that that care about the mission of the agency to keep that front and center, you work through everything. This country needs to get back to that," McCarthy said.

"We all have to return to our core values. And if it isn’t keeping one another healthy and safe, then I don’t know what it is."