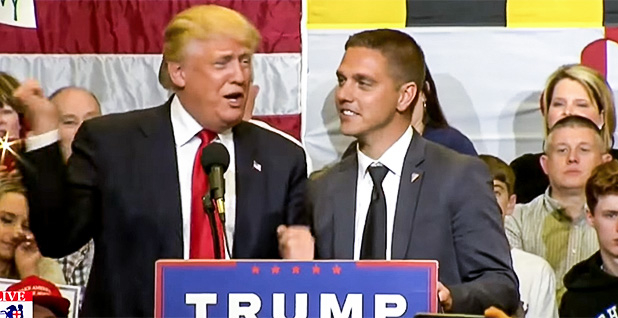 A former senior EPA official is suing the agency as well as the Department of Energy over alleged retaliation after he raised concerns about ex-Administrator Scott Pruitt’s excessive spending and mismanagement.

Kevin Chmielewski, once a top political aide at EPA, filed a lawsuit yesterday in the U.S. District Court for the District of Columbia. He claims EPA violated his free speech and due process rights by removing him from the agency while DOE did the same by refusing to hire him. This was done for "retaliatory purposes," according to his complaint.

Along with the two federal agencies, he also named EPA Administrator Andrew Wheeler and Energy Secretary Dan Brouillette as defendants in the case.

Chmielewski confirmed to E&E News he filed the lawsuit yesterday but declined to comment further.

Press officials at DOE didn’t respond to questions from E&E News for this story.

Chmielewski has been a thorn in the Trump EPA’s side for some time now. A vocal critic of Pruitt and his top aides at the agency, he expressed worries about Pruitt’s travel and office expenses with reporters as well as lawmakers on Capitol Hill. Pruitt resigned from EPA in July 2018 under a crush of ethics scandals.

Chmielewski’s lawsuit said he "exhausted his administrative remedies" with the Office of Special Counsel and the Merit Systems Protection Board. Both offices found they couldn’t help the former EPA official because they lacked jurisdiction over a political appointee.

Chmielewski, a U.S. Coast Guard veteran and Delaware resident, was part of the advance team for President Trump’s 2016 campaign, working as a "body man" to the then-candidate.

In 2017, he landed at the Department of Homeland Security. Chmielewski then joined EPA that same year as its scheduling director and later was promoted to deputy chief of staff for operations at the agency.

From that vantage point, Chmielewski catalogued Pruitt’s heavy use of business and first-class flights, exorbitant spending on security measures, and use of EPA subordinates for personal tasks, like finding him a new apartment. The former EPA official disclosed these worries to lawmakers, which were detailed in an April 12, 2018, letter by House and Senate Democrats, and many of which were repeated in the lawsuit filed yesterday.

EPA’s inspector general investigated several of those concerns, issuing reports on Pruitt’s premium travel and 24/7 security and admonishing the agency. Other allegations by Chmielewski were dismissed, such as the National Archives and Records Administration finding the allegations that select entries on Pruitt’s calendar were deleted to be unsubstantiated (Greenwire, Feb. 21, 2019).

The lawsuit also details Chmielewski’s account of how he was forced out at EPA. He says he was stripped of his access pass and removed from EPA headquarters in February 2018. By April that year, he received personnel records "falsely representing" he had resigned the prior month.

Pruitt had "removed or otherwise involuntarily terminated [Chmielewski’s] employment because of his disclosures." Then in March of this year, Chmielewski was contacted by the White House, which wanted him back in the Trump administration, according to the lawsuit.

Chmielewski then reached out to DOE about a position after being advised to do so and later did an interview and was sent paperwork. That job didn’t come to fruition over "what happened at the EPA with Scott Pruitt," he was told.

Chmielewski "was not hired into the DOE position in retaliation for his protected activity in violation of his speech rights under the First Amendment," the lawsuit said.

The former EPA official requested the court reinstate him in his deputy chief of staff job at EPA or the position at DOE. In addition, Chmielewski requested records related to his "purported resignation" be expunged from his file and his attorneys’ fees be awarded.