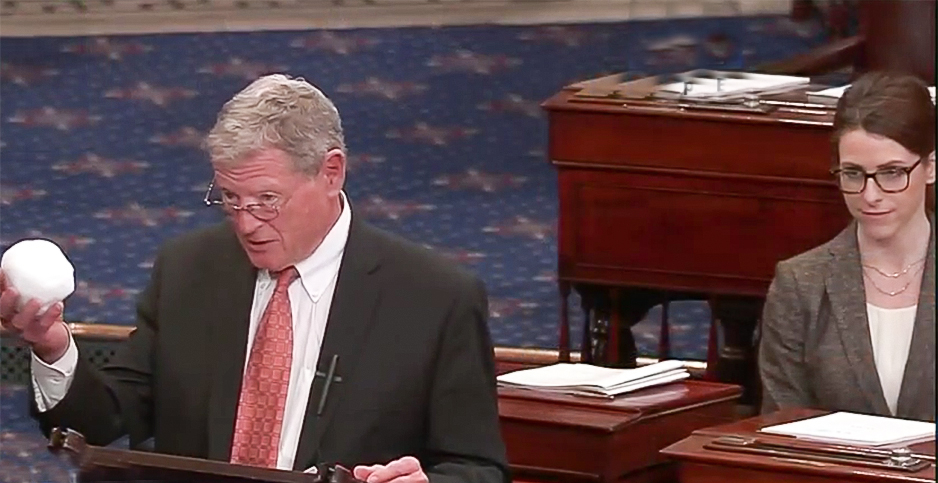 Mandy Gunasekara watches as her then-boss Sen. Jim Inhofe (R-Okla.) holds a snowball in the Senate chamber in 2015. C-SPAN

Mandy Gunasekara is striking off on her own.

The former deputy in EPA’s air office recently left the agency to start her own advocacy group allied with President Trump.

In her resignation letter, she touted her work to repeal the "disastrous Clean Power Plan" and to promote what Trump calls "beautiful clean American coal" (Greenwire, Feb. 7).

A Mississippi native and a seasoned conservative, Gunasekara was motivated to join EPA by what she viewed as the regulatory overreach of the Obama years.

While at EPA, she worked on all of the Trump administration’s efforts to undo major regulations, including the rollback of Obama-era vehicle efficiency standards and the replacement of the Clean Power Plan.

Those moves earned her intense praise from conservatives and outrage from environmental and public health groups. But she kept her head down and focused on the task at hand, paying little heed to outside criticism.

"I think when you’re in the agency, it’s focusing on getting the work done and doing it the best you can in a way that is consistent with our direction," Gunasekara said in a recent interview. "You’re just focused on the mission at hand and getting it done."

Gunasekara is notorious in environmental circles for another reason, as well: She was the staffer who famously handed Sen. Jim Inhofe (R-Okla.) a snowball on the Senate floor in early 2015.

Inhofe, one of Congress’ most vocal climate skeptics, used the snowball as a prop to argue that concerns about global warming were baseless.

Gunasekara recently sat down with E&E News at a coffee shop in Washington to discuss her time at EPA, her new venture and what it’s like to carry a snowball into the Senate.

What are your views on climate change? Do you agree with the mainstream scientific consensus?

Consensus on global warming is varied and nuanced. As a general matter, the climate is changing, and humans have a role. That’s a serious issue that deserves our continued attention.

Why did you originally join EPA?

I came to D.C. to push back against what I saw as the overreach of the last administration. And I wanted to come over to the EPA to help set the agenda for President Trump.

Did you enjoy your role at EPA?

Yeah, it was great. It was exhilarating, overwhelming, but extremely challenging and fun. When I first got there, it was really about setting out the climate and air agenda. That started out with the Paris Agreement withdrawal effort, and repealing the Clean Power Plan and then coming up with a replacement.

I also worked a lot on the [renewable fuel standard]. I think that’s the thing that took up the most amount of my time. First it was Paris, and then it was continually the RFS thereafter, and then we had all these other issues, including permitting reform.

Would you say you’ve had a hand in most of the major regulatory rollbacks, including the clean car rules rollback and the Clean Power Plan replacement?

Yes. I’ve worked on all the big initiatives.

Have you heard criticism of the rollbacks from environmental and public health groups?

I think when you’re in the agency, it’s focusing on getting the work done and doing it the best you can in a way that is consistent with our direction. And so we always started from, "How is it rooted in the law? How is it going to tangibly improve the mission of the agency?" So you’re just focused on the mission at hand and getting it done.

Why did you decide to leave EPA and start Energy 45?

So there are a couple different reasons. One is that there is a void in the communication space of folks going out there and promoting the positive story of the president’s energy, economic and environmental agenda. So I get to defend the greatest president in modern history.

Another is that I wanted to get back home to Mississippi. Since I’ve been in D.C., I’ve been wanting to get back home. I’ve got two children aged 5 and 3. We’ll be in D.C. until the end of my son’s school year, and then we’ll officially move down and establish home base in Mississippi this summer.

Where will Energy 45 get its funding from?

Energy 45 is organized as a 501(c)(4) organization, so I will not be disclosing my donors.

Is 45 a reference to Trump?

Was a desire to get Trump re-elected a motivating factor in creating Energy 45?

Yeah, I think him being re-elected is vital to the success of the overall agenda. What we’ve done in two years is fantastic, but imagine what we can do in eight years. Part of supporting that is educating the public and educating voters about what we’ve done in a positive way because we have a very strong message to tell. And so all of that lends itself toward the president getting re-elected in 2020.

What was it like serving as an aide to Sen. Jim Inhofe when he chaired the Environment and Public Works Committee?

It was great. I was brought on board when he took back over as chairman of EPW. Similar to what I did at EPA, I set out his climate and air agenda items for the committee. I also worked really closely with [Sen. Shelley Moore Capito (R-W.Va.)], who was the head of the air subcommittee.

I enjoyed my time with Sen. Inhofe. He’s a great member to work for. He has clear vision on some controversial issues that Republicans historically haven’t been willing to step out on. And so as a staffer, it was very fun to work for somebody in that space.

Did you overlap with acting EPA Administrator Andrew Wheeler, who also served as a staffer on the EPW Committee?

And so he really helped set up what ended up being a very successful two years. He helped set me up with that.

Have you and Wheeler reminisced about the Inhofe years?

Yeah, some, for sure. At the agency, obviously I interacted with him on all of the big initiatives we were getting through, and we talked a lot about that. There’s a strong camaraderie that will continue. Wherever former Inhofe people are, we always end up talking about, "How’s the Mountain?"

You were the Inhofe staffer who brought the snowball to the Senate floor, right? That was a famous moment.

Yeah, I took it to the floor. I had no idea at the time that it was gonna be a famous moment.

You’re not supposed to bring props to the floor, and if you do, you’re supposed to get a unanimous consent request. And so I was walking out to the floor and kept getting stopped by some of the floor assistants, who were like, "Is that a snowball?"

And I was like, "Sen. Inhofe’s snowball, yes. I’m taking it to the floor." And then we got the UC request done just to comport with the formality of the Senate that we all respect.