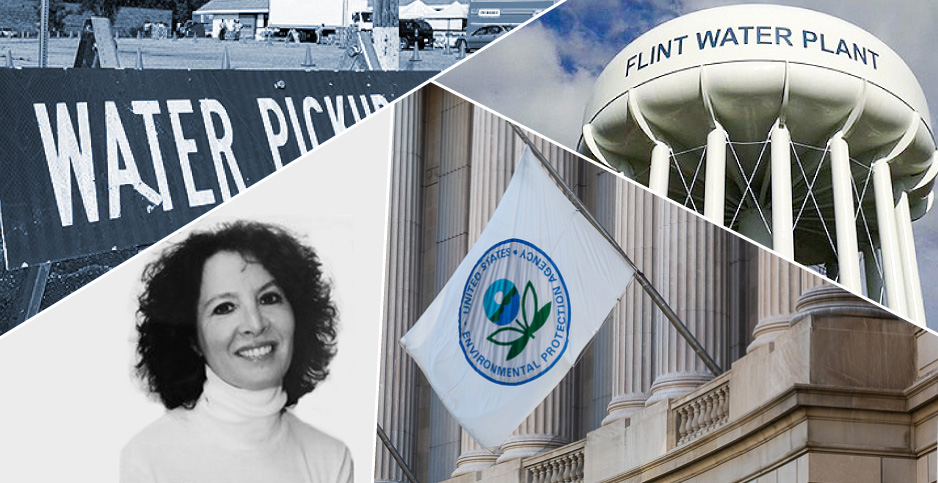 Thirty-four years ago, Ronnie Levin’s research on lead in drinking water sounded the alarm for many Americans about risks lurking in their tap water. As the Trump administration propels forward a new rule, Levin is still fighting to make sure communities, especially the most vulnerable, have safe drinking water.

Levin’s pivotal research, which laid the groundwork for EPA’s first lead rule, was leaked to major newspapers across the nation in 1986. "Dangerous Amounts of Lead in Much Drinking Water, EPA Says" was the ominous headline in The Washington Post.

Her research, which warned that nearly one of every five Americans served by public water systems was consuming unsafe levels of lead, helped cement the nation’s first federal limits on copper and lead in drinking water coming out of the tap, targeting potent neurotoxins blamed for causing lower intelligence in children, hypertension, strokes and heart attacks in adults, and higher risks during pregnancy.

The rule was revolutionary for recognizing that lead leaches into drinking water via pipes, and required utilities to go into people’s homes to test drinking water, rather than relying on samples taken at treatment and distribution plants.

Levin, who retired from EPA three years ago and now manages the water and health program at Harvard University’s T.H. Chan School of Public Health, is still fighting to strengthen those limits — but this time she’s working from outside the agency to take on the Trump administration’s most recent proposed rule. She’s doing so on behalf of the Environmental Protection Network, a group of former EPA career staffers and confirmation-level appointees.

What’s at stake, she says, is the health of some of the most vulnerable communities in the nation.

"The people who end up being exposed to lead in drinking water are core inner city people. It’s not rich suburbs, and it’s not rich towns," Levin said during a phone interview. "It’s Flint, Mich.; Detroit; Newark, N.J.; Cleveland, Ohio; Washington, D.C.; and Providence, R.I. That’s who it is."

EPA, which has said it will consider public comment, is proposing to require utilities to begin removing pipes once lead concentrations reach 15 parts per billion at 10% of taps tested. It would also institute a 10 ppb "trigger level" at which utilities would be required to consult state regulators on how to prevent lead pipes from corroding (Greenwire, Feb. 24).

While EPA has said the proposal reflects the best science available, critics have countered that the agency’s proposed rule is confusing and unenforceable and provides too much time for replacing old, leaching lead pipes.

Levin spoke with E&E News from her home in Newton, Mass., about her new gig, her leaked research and taking on EPA:

So your research was leaked to the press?

What was your reaction?

I freaked out. EPA was in this very dicey position. You have to remember, this was under [former President] Reagan. This was in 1986. To his credit, the head of the agency, who was Administrator Lee Thomas at the time, said, "We’re owning it and we’re gonna publish it." The water office never wanted it.

How did you end up working on lead in drinking water?

It was maybe 1985, and the water office decided to propose changing the [maximum contaminant level] for lead in drinking water.

What did you learn?

EPA’s limit at the time for lead and copper of 50 parts per billion, measured at the entry point of a distribution system, was insane. And the way that drinking water standards were in 1985 — they have since changed — is that there was one sample taken in a water system once a year. And if you did it OK, then it was every three years. One sample.

The water office needed to up its game here. It needed to be not one sample, but many, many, 50 to 100. And it needed to be repeated constantly because microconditions change. And so that’s what I came up with.

And you found there’s an economic case to be made for controlling lead?

And there are huge economic benefits of doing corrosion control. That’s where I really came in, as an economic analyst, to regulate corrosive water.

What was EPA’s response to your research?

The drinking water office was not interested in it at all. They just ignored it because they’re bureaucrats and they’re risk-adverse and they’re conflict-averse and that’s how it’s done.

But that study led to the nation imposing stricter lead levels in drinking water?

What do you think of EPA’s current Lead and Copper Rule proposal?

It’s so poorly done, so poorly written that it’s certainly going to be litigated. It was proposed because they wanted to try and capture some environmental good news, but it’s just not. It doesn’t do anything for anybody.

It’s not enforceable. It doesn’t make any sense. They cut by half the rate of replacing lead service lines.

Do you think you’ll affect the rule?

I’m a military brat. My dad was a physician. He was in the public health service, and he ran a refugee camp in Southern Europe. So Naples, Spain. So for being a nice white girl, daughter of a Jewish doctor, I saw stuff that most people don’t see. This was in the early ’50s, and people were really poor. And I saw that.

How did that experience shape you?

He ran a refugee camp, so when someone got sick, the entire family went to the hospital. And I saw kids who were scrounging in the dirt and picking up debris that fell off the trash can at the hospital and the street, kids my age. I knew there were a lot of kids out there like me who didn’t have food.

I thought, "This is how things are," and I knew we were different.

Your husband, Joel Schwartz, is also a former EPA staffer who studied lead. How did you meet?

We went to graduate school together at Brandeis University. And then we both went to EPA for 15 years. That’s how I got to EPA. He was at EPA, and somebody offered me a job that I couldn’t refuse. So I didn’t refuse.

We worked together on lead and gasoline for years.