Ex-Interior official on her ‘sketchy’ political past 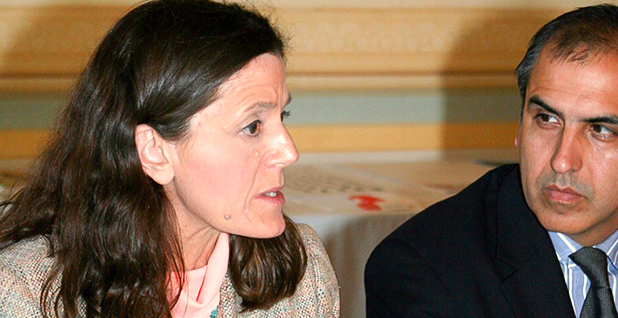 Lynn Scarlett might be one of the few people in the world who has talked to the Trump Cabinet about climate change.

In early 2017, Scarlett was asked to brief Cabinet members on natural infrastructure over lunch at the White House.

"It was a time that they had indicated three priorities: tax, health care and infrastructure," recalled Scarlett, now the vice president of policy and government relations at the Nature Conservancy.

So Scarlett, the George W. Bush-era No. 2 at the Interior Department, talked about increased intensity of storms fueled by climate change and how the federal government could use natural infrastructure, such as oyster reefs or reed beds.

"It was not focused on climate, although woven into my presentation was reference to climate," she said.

Sitting around the table at the Eisenhower Executive Office Building were Energy Secretary Rick Perry, Treasury Secretary Steven Mnuchin and former economic adviser Gary Cohn, she said. The other guest presenter was Elon Musk, who talked about innovation and infrastructure — but that’s another story.

Later, the group walked over to the White House to have lunch with President Trump, Vice President Mike Pence, former chief strategist Steve Bannon, policy adviser Stephen Miller and others.

Scarlett said she continued to work on the issue with the Army Corp of Engineers, "but it’s fair to say that the focus has diminished."

A petite woman sporting large-framed sunglasses and a long puffy coat, Scarlett recently caught up with E&E News over breakfast at Dan & Brads, a restaurant in Arlington.

Looking back, she called her political past "sketchy."

Scarlett grew up in Pennsylvania with three wild nature-loving sisters and two "renaissance" parents. She said her parents always told her, "You go girl!" which was unique for the time. That blessing allowed her to move 3,000 miles west to attend college at the University of California, Santa Barbara, where she participated in anti-Vietnam War protests.

After pursuing advanced degrees in political economy and political science, she grew interested in economics and had what she described as an "intellectual journey." She studied the intersection of civil liberties and economic collectivism in countries like Chile and China. She grew interested in how market dynamics affect human activity.

She does not exactly identify with the Republican Party and considers herself "a policy person, not a politics person."

The following conversation has been edited and condensed.

You are a Republican. Is that correct?

I served in a Republican administration; let’s put it that way.

Why do you think the Republican Party moved away from environmentalism?

For years and year and years the Republican Party had strong environmental vision, and you go all the way back to Teddy Roosevelt, even in the Nixon years, when all of the environmental statutes were passed.

The challenge I see now is the dialogue on environment has become the dialogue of symbols rather than problem-solving. It makes it difficult to engage meaningfully. Many Republicans look at the Endangered Species Act and conflate the act with the value set.

Now if it’s environment, [Republicans] don’t like it. Because there is this assumption that it must mean big government regulation.

It makes it difficult to be able to find points of alignment.

What do you think are the long-term environmental impacts of the Trump administration?

I think the end of the story remains to be told. But I think, big picture, the greatest challenge with this administration that starts with the vision thing — the energy dominance thing.

When you start with an energy-first vision it brings a lens to everything you do. The challenge is that department’s mission is multifaceted. Yes, the mission does include some resource use. [But] the department is the ultimate balancer.

Do you think you achieved that balance during the Bush administration?

Throughout all of that time there was a lot of interaction with the Nature Conservancy.

Does Interior collaborate with the Nature Conservancy in the same way now?

One thing I try to remind people is our department is 70,000 people all across the nation, and the vast majority of day-in and day-out work goes on in the field, in the state office, at the wildlife refuge, and doesn’t rise to national headlines. That work continues. The conservancy is still doing a lot of work with BLM. It’s only a veneer of things that really rise to national visibility.

The challenge for the conservancy and others is at the highest level. There are not as many opportunities for collaboration.

We see opportunities on the Hill to advance "stepping stair" legislative support for clean energy, and we see some growing interest in what we call "natural climate solutions" — reforestation, improved forest management and other nature-based ways to "store" carbon.

What do you think of the "Green New Deal"?

Right now, it’s very unformed. [New York Times op-ed columnist] Tom Friedman first launched the notion. The second thing is it’s sort of a grab bag. It goes way beyond just environmental matters. So I look forward to seeing if it translates into specifics and if so what they are. Certainly we embrace some of the aspirational goals — the clean fuel economy. But as always the devil is in the details. So it’s a little premature to really weigh in.

Who do you think is going to replace Secretary Ryan Zinke?

It is speculative. Either they will stay the course with David [Bernhardt] figuring he has been there, done that. Or they will go with [a governor or politician]. But it is very difficult to tell which route they will go.

You worked with acting Secretary David Bernhardt at Interior. What do you think of his leadership?

I have a rule not to comment on individuals — other than to say he is very knowledgeable about the department.

This month is the 50th anniversary of the 1969 Santa Barbara oil spill. What are the lessons from the spill?

I was in Santa Barbara at the time of the spill — and helped with beach cleanup and efforts to save birds coated in oil. The spill both motivated the moratorium in drilling off the coast of California and was a major spark for broader focus on environmental legislation in the next decade.

Do you support the keep-it-in-the-ground movement?

I and the conservancy are champions of ambitious carbon pricing as the best way of stimulating innovation in clean energy and shifts away from fossil fuels. … Ultimately, these kinds of policy tools will drive down emissions in ways that are doable and cost-effective. One big near-term challenge is in the transportation sector, including aviation. There are no immediately available and cost-effective liquid fuel options that are feasible for many transportation needs.