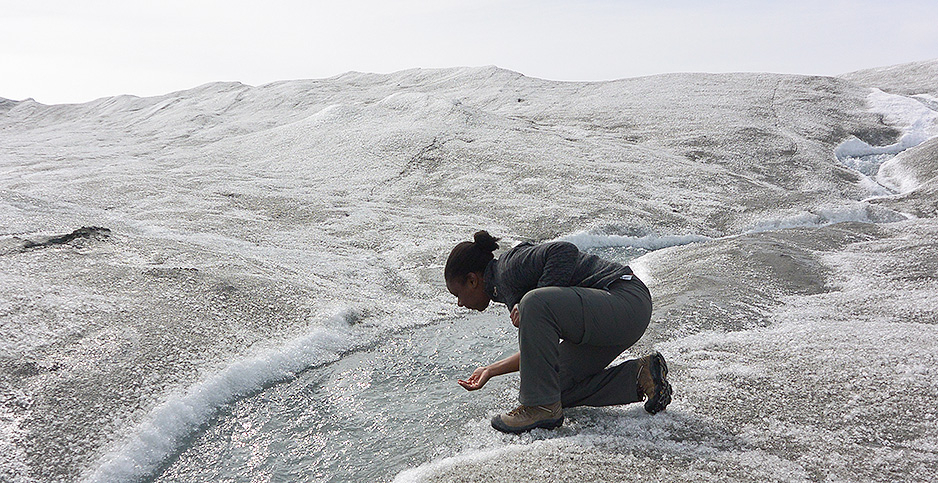 Kendra Pierre-Louis, a former climate reporter for The New York Times, is launching a new podcast. She's pictured here drinking from a stream on the Russell Glacier during a reporting trip to Greenland. Kendra Pierre-Louis

Kendra Pierre-Louis is embarking on a new adventure in the middle of a pandemic.

The former climate reporter for The New York Times is gearing up to launch a podcast on global warming produced by Gimlet Media.

The podcast — called "How to Save a Planet" — will focus on solutions to climate change, including ways people can pursue civic engagement and get involved in state and local government.

A graduate of Cornell University, Pierre-Louis obtained a master’s in science writing from the Massachusetts Institute of Technology before becoming a staff writer at Popular Science.

Her reporting has taken her all over the world, and her work has been published in The Washington Post, FiveThirtyEight, Newsweek and Slate.

Now she will be a podcast reporter, working alongside co-hosts Gimlet CEO Alex Blumberg and marine biologist Ayana Elizabeth Johnson.

Pierre-Louis recently spoke with E&E News about whether individual actions can help combat climate change, how she almost died on a reporting trip to Myanmar and why she hates mayonnaise with a passion.

Why does the podcast focus on solutions to climate change?

For the past 10 or 15 years, there has been a form of climate journalism that focuses on the problem to such a degree that it can be disempowering. People can feel like the scale of the problem is so large and there aren’t any solutions.

So we’re trying to get people to understand that they can be part of the solution. They can plug into aspects of our society to move the needle on climate change.

What are some examples of the solutions that you discuss?

Well, I think journalism often assumes — to its detriment — that people understand how civic engagement works. But while many people take a civics class in elementary school, they don’t ever learn how these structures work in the real world.

So we’re helping people find points of entry to their state and local governments. We’re almost giving people a Civics 101 lesson. We’re saying, "Hey, if you care about flooding in your community, you should probably go to a planning board meeting, because that’s where policies that affect flooding happen."

There’s a debate in climate circles about how much individual actions matter compared to systemic changes. Do you wade into that debate?

Well, clearly there’s a limit to how much individual actions can actually achieve. For instance, we know that emissions only dropped 17% at the height of the lockdowns caused by the coronavirus pandemic. We were doing far more than anyone had ever chosen to do on their own, and it still wasn’t enough to significantly reduce emissions.

Your handle on Twitter is "Kendra ‘Gloom Is My Beat’ Pierre-Louis." What’s the story behind the middle name?

Sadly, my parents didn’t grace me with an actual middle name, so I named myself. [Laughs] But actually, the story starts with my time as a staff writer for Popular Science.

I sat right next to a co-worker there who reported on geological hazards like earthquakes and volcanic eruptions, and I was writing a lot about climate-linked natural disasters like hurricanes and wildfires. And one day, our managing editor walked by and jokingly called her "doom" and me "gloom."

He actually ended up printing that out and putting it on our adjoining desk. So it’s just been a long-running joke.

In all seriousness, do you find reporting on climate change to be gloomy or depressing at times?

Well, there’s something to be said for compartmentalization. If I think about it too hard, I definitely get bummed out.

I think the stories that really upset me and stick with me are the ones that show the personal toll of climate change. For example, in 2015, I was in Myanmar reporting on how climate change is altering rainfall patterns and increasing tropical storms.

While I was there, I interviewed someone who managed to survive Cyclone Nargis by holding on to a tree for hours, but 10 or 11 of his family members were swept away. He was only left with a son. That’s when it gets to me, when you can see what the impact of 1.1 degrees Celsius actually means.

Why did you decide to leave The New York Times?

I would say that a lot of the discussions that are happening right now around what it means to be like a Black person in media — and how that isn’t always the most comfortable or supportive environment — definitely were a factor in my decision to leave.

I would add that when Gimlet reached out, it felt like a really exciting thing to run toward. I’m really excited about what we’re working on, and they reached out to me at the exact right time.

What is your favorite story you’ve ever written?

There are two stories, and both are from the same period. I had won a fellowship from the International Center for Journalists for journalists of color to go overseas and report, so I went to India and Myanmar.

In India, I wrote a story for FiveThirtyEight about how climate change is causing these extreme heat events that can change weather patterns really far away. So extreme heat in India led to this catastrophic rainfall in the Himalayas. And I reported that story from the seat of my pants. [Laughs] I didn’t have a fixer or a translator or anything.

The other one is a personal essay I wrote for Sierra, the national magazine of the Sierra Club. It was about how I almost died when I was in Myanmar. My bus almost went off a cliff. And that piece almost wrote itself. Like, I started writing almost as soon as I didn’t die.

Wow. Why did the bus almost go off the cliff?

They were having extreme rainfall in this mountainous region of Myanmar, and they hadn’t modified their road-building techniques to account for the fact that it was very wet. Deforestation was another factor.

I feel like one of the things that can happen as a journalist is that you feel very removed from the things you’re reporting on. But this reminded me more than anything else that it wasn’t just a story, and these things that we report on affect people’s lives.

On a lighter note, your Twitter bio says you’re "anti mayo." What does that mean?

Mayonnaise is a foul, foul, disgusting condiment that doesn’t belong anywhere near me. I really, really don’t like mayo. And that’s an understatement. [Laughs]

If you don’t mind mayo, I don’t think you recognize its ubiquity and how it will show up in places unannounced. For example, it’s not uncommon to order French fries at a fancy restaurant and they’ll bring them out drizzled in aioli. And it’s not listed anywhere that this abomination is coming out. So I guess that’s part of my rage at this condiment.