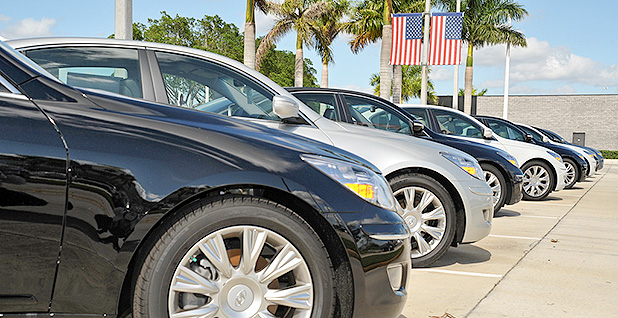 "EPA staff had basically nothing to do with that entire document and analysis," Jeff Alson, a former staffer in EPA’s Office of Transportation and Air Quality, told E&E News.

"They put the EPA logo on specifically to deceive the American public to make it look like the agency technical staff was involved in the analysis and supports the analysis," Alson said in an interview. "But nothing could be farther from the truth."

Alson served as a senior engineer and policy adviser in the transportation office for 40 years. He retired three months ago.

"They cooked the books," he said. "The PRIA has the EPA logo on it. But I will be telling people that EPA staff had basically nothing to do with that entire document and analysis."

Another source with knowledge of the proposal, who requested anonymity for fear of retaliation by the administration, echoed these concerns.

"There’s no evidence whatsoever that EPA had any role in developing this proposal," that person said.

DOT and EPA have joint jurisdiction over the clean car rules — a unique scenario that can lead to friction.

Under the Trump administration, EPA’s regulatory powers have often been given less weight. It’s an about-face from the Obama administration, which gave the agency unprecedented prominence as it sought to address greenhouse gas emissions, tighten air quality standards, and restrict water impairment from mining and industrial activities.

Think of it like this: If EPA was a lead character in the Obama administration, it’s been relegated to a supporting cast member under President Trump.

EPA’s sidelining was also apparent in the White House’s infrastructure blueprint released in February. It called for eliminating a provision requiring the agency to review most environmental impact statements under the Clean Air Act and handcuffed its ability to weigh in on whether projects would impair a "navigable water," among other things.

The reorientation is natural for a GOP administration, said Brent Fewell, who served as EPA deputy water chief under President George W. Bush.

Trump wants to defang an agency many Republicans felt had been weaponized, Fewell said, but that doesn’t mean it’s sacrificing environmental protection.

"In every administration, there is give-and-take where there is shared overlap in their regulatory mission and regulatory requirements. This administration has probably de-emphasized EPA’s aggressive posture from the Obama administration," said Fewell, who now runs Earth & Water Law Group.

"To me," he said, "it’s not unusual or troubling. It’s simply the administration’s prerogative to pick who they want to take the lead."

That dynamic has played out in setting the clean car standards.

The National Highway Traffic Safety Administration, a division of DOT, is responsible for promulgating the corporate average fuel economy (CAFE) standards. EPA is tasked with regulating tailpipe greenhouse gas emissions from vehicles. The two agencies have aligned their programs, which inform one another.

Margo Oge, the former head of EPA’s transportation office, said she was dismayed to hear from Alson — her former employee — about career staff being sidelined.

"My understanding is that NHTSA in-house has only two engineers that are responsible for the fuel economy standards, whereas at EPA, we have hundreds of engineers," Oge said.

"When it comes to technical expertise and know-how, that lies within EPA," she added. "All these people worked for me for 20 years when I was at EPA. I can confirm the extraordinary expertise of the people at EPA when it comes to developing emissions standards. Many of them have doctorate degrees."

A DOT spokesman didn’t respond to a request for comment for this story, including a question about the number of engineers at NHTSA.

Heidi King, deputy administrator of NHTSA, said during a press call with reporters this morning that the two agencies have a long history of working together.

"We’ve been working together for years," King said, adding that the two agencies "make sure we’re sharing our thoughts openly with one another."

That relationship has, at times, been acrimonious, said Susan Dudley, who led Bush’s Office of Information and Regulatory Affairs, a sort of referee between agencies in the federal rulemaking process.

NHTSA had carried the vehicle rules until the Supreme Court gave EPA the right to regulate tailpipe greenhouse gas emissions. Bush suggested the agencies work together.

Dudley recalled "thrice-weekly meetings" and noted EPA wrested control quickly, even leaking a notice of proposed rulemaking to the press in an attempt to "tie the administration’s hands."

"I think DOT is taking that back, is taking the lead on that," said Dudley, who is now director of the George Washington University Regulatory Studies Center. "And I think that’s appropriate. There’s certainly things that EPA can contribute to it."

An EPA spokesman pushed back on the notion that agency career staff were shut out of the process.

"EPA officials and career staff have worked amicably with their counterparts at NHTSA in the development of the upcoming [notice of proposed rulemaking] that will aim to save lives, preserve consumer choice and improve the economy," the spokesman said yesterday in an email.

This isn’t the first time EPA has butted heads over regulations shared with other agencies.

The Army Corps disagreed so strongly with the joint regulation that it requested all references to the agency be removed from the rule and supporting documents.

Congressional Republicans seized on the memos to slam EPA for a regulation they see as government overreach, even inviting Peabody to testify at a Senate Environment and Public Works Committee hearing last spring.

"Is it true," Chairman John Barrasso (R-Wyo.) asked, "that the Army Corps was really cut out of the process and that you asked that the corps’ name be taken out of the technical analysis?"

While Barrasso believes the Clean Water Rule, also known as Waters of the U.S. or WOTUS, extended federal jurisdiction over too many wetlands and waterways, the memos actually suggest the regulation may have been too restrictive. He slammed EPA for making changes to the final version without consulting the corps.

Among those changes was implementing a first-ever geographical limit beyond which wetlands and ponds were deemed too far-flung from tributary networks to warrant federal protections.

In most cases, that outermost boundary was 4,000 feet from the nearest tributary. Another last-minute change was language to exempt wetlands near agricultural ditches from automatically being regulated.

The Army Corps thought that the changes, made to appease industry concerns, were arbitrary, and that the 4,000-foot limit on jurisdiction "would cause significant adverse environmental effects" by leaving some wetlands unprotected that would have been regulated under previous regulations.

"In the Obama administration, EPA took the primary role in the Waters of the U.S., and quite frankly the Corps of Engineers played the second fiddle in that case and that didn’t turn out so well," Fewell said. "Many of their recommendations were ignored. And in this administration, there’s a different interpretation of who should take the primary role."