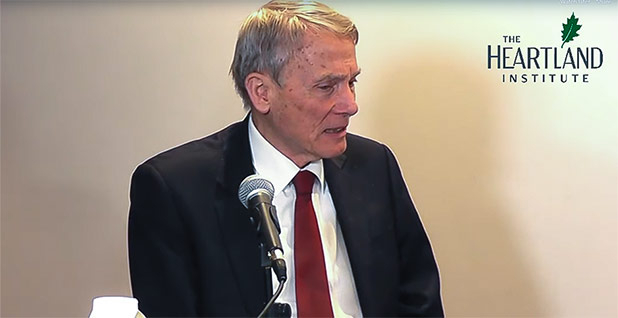 President Trump personally endorsed a plan to ignite a public clash over the accuracy of climate science before the idea was rejected by "brainwashed" officials in the White House, a former adviser to the president said yesterday in his first public remarks since leaving the administration.

William Happer, who proposed the failed effort to question the conclusions of scientists on climate change, said he spoke with Trump several times about climate change while working for the National Security Council. The president expressed agreement with Happer’s assertions that climate change is unharmful and is overblown by experts in the scientific community, he said. Happer says that more carbon dioxide will help the planet thrive.

"He’s very sympathetic to trying to get some more rationality into climate policies," Happer said yesterday. "Personally, he feels very strongly that way, and many of the people in the White House who advise him are nervous about the political implications of that, which I can understand too."

Happer spoke in Madrid at an event hosted by the Heartland Institute — an organization that promotes climate denial — on the sidelines of a global summit on climate change organized by the United Nations.

Happer, the only scientist known to have briefed Trump on climate, blamed the demise of his plan to hold a "hostile review" of climate research on officials in the administration and Trump’s campaign who said that attacking science would "cost more votes than he would win."

The revelations yesterday coincided with Trump’s shifting approach to climate change. He has not recently mocked researchers or openly denied that global warming is occuring, a cornerstone of his earlier talking points.

While attending a NATO summit in London yesterday, Trump was asked by a reporter about climate change.

"I think about it all the time … and, honestly, climate change is very important to me," Trump said. "I’ve done many environmental impact statements over my life, and I believe very strongly in very, very crystal-clear, clean water and clean air. That’s a big part of climate change."

Happer, an emeritus physics professor at Princeton University, said the White House approached him to work on technology issues at the National Security Council, including hardening the grid from electromagnetic pulses. He said he offered one condition before accepting the job, that he be allowed to go after climate science.

"I told them that I would come if they would permit me to at least freelance on trying to get some sense into climate policies," Happer said.

He confirmed that the administration tried to draw attention away from the National Climate Assessment, a major report released every four years, by making it public late in the day on Black Friday in 2018. Happer said there were discussions about altering the report or withholding it altogether, but that officials decided it was politically risky to do so.

"There’s also the problem they’ve all been brainwashed, so many people in the Trump administration felt ‘maybe it’s right, how do I know, I’m just a lawyer,’ most of them are lawyers," Happer said. "What finally happened was they diddled with it, they couldn’t decide what to do, and so they decided ‘we’ll just not do anything to it, we’ll release it at some time when the news media won’t notice it, they’ll be distracted by something else,’ so they released it on Black Friday."

The plan backfired, and the report’s alarming findings received weeks of coverage from media outlets around the world. So did the administration’s effort to cover it up.

That caused "several weeks of recriminations and mutual finger pointing" fueled in large part by Trump’s anger about the release of a report whose existence he seemed unaware of. That helped Happer lay the groundwork to question climate science. His plan was patterned on a military exercise known as a red team, blue team review. Two sides would debate the merits of climate science, one of them being led by scientists or policymakers who reject mainstream research on climate change.

As he has done in previous public appearances, Happer yesterday compared his views to those of lonely scientists in history who were initially chastised for their findings, only to be proved true later. He compared his work to Alfred Wegener, a 20th-century scientist who developed the theory of continental drift, which was initially mocked by some of his colleagues.

"He was right, and sooner or later we will also be vindicated, those who are raising the concern about the distortions of science to support climate alarmism," Happer said.

A PowerPoint on a screen behind him was headlined "Scientific Consensus is often wrong," and it included a line that said, "Climate scientists also sneer at critics who are distinguished physicists, astronomers, etc." Happer, who’s a successful physicist, was not formally trained in climate science.

Happer described people who are worried about climate change as "cult" members. And he said those who advocate for climate change mitigation policies are part of a crusade that will hurt many people.

"We have a climate crusade. … This is not science, this is religion," Happer said. "Crusades have a bad way of ending. Typically many, many people are hurt, no good is done, a few cynical opportunists profit and most people pay the price, and the same thing will happen with the climate crusade if we permit it to go forward, and I pray that we can stop it before it does too much damage."

Happer said it’s possible that the red team idea could resurface if Trump wins a second term. In addition, he said, the administration may one day go after the endangerment finding, the legal foundation that gives EPA its authority to regulate greenhouse gases under the Clean Air Act. The red team would be part of that effort, he said.

Happer said his advice to Trump, if he wins a second term, would be to slash funding for climate science.

"I would still recommend a review as soon as possible and, second, I would recommend looking at the amount of funding that is going into climate science because much of the problem is being driven by too much government funding with the understanding that the results of the search have to reinforce the narrative that there is a crisis, there is an emergency that has to be dealt with," he said.