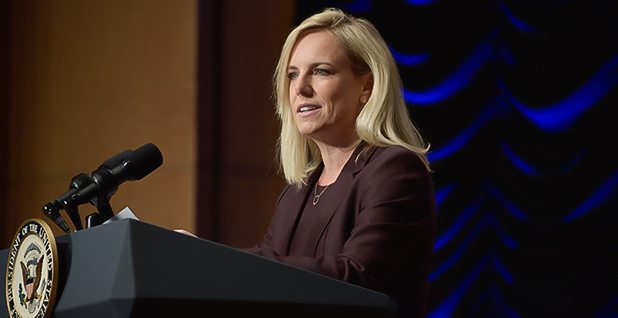 Former Secretary of Homeland Security Kirstjen Nielsen has been tapped to serve on an influential Energy Department advisory board. DHS/Flickr

Former Homeland Security chief Kirstjen Nielsen was introduced yesterday as the latest member of an influential advisory board that reports to Energy Secretary Dan Brouillette.

Nielsen joined Brouillette at the Secretary of Energy Advisory Board, which met yesterday at DOE headquarters.

Nielsen left the administration last August after months of speculation over whether she would be fired or quit as President Trump expressed displeasure over immigration at the border with Mexico.

Brouillette said Nielsen, who worked on cyber and infrastructure security efforts in the private sector, has already been "quite instrumental in her service to the board."

He said they had earlier "had a nice conversation about pandemics and how you address them."

And he said he and Nielsen talked about how DOE might help the coronavirus task force led by Vice President Mike Pence.

Former Energy Secretary Rick Perry at one point had been rumored to be under consideration for Nielsen’s job as Trump grew frustrated with an increase in migrant families from Central America heading to the U.S.-Mexico border. Nielsen came under fire from Democrats in Congress for defending the administration’s policy of separating families at the border.

Nielsen’s record in office contrasted sharply to those of her predecessors who saw climate change as a threat to domestic security.

She did not write any climate change reports in 16 months running the federal government’s second-largest department and was skeptical about whether people contribute to climate change. "I do absolutely believe that the climate is changing. I can’t unequivocally state it’s only caused by humans," Nielsen said during her Senate confirmation hearing in November 2017 (Climatewire, April 9, 2019).

The SEAB, which yesterday delivered reports on ways the Department of Energy could improve its artificial intelligence programs and boost innovation, was convened by Energy Secretary James Watkins in the George H.W. Bush era. The committee’s use has changed over the years, but former Obama-era Energy Secretaries Steven Chu and Ernest Moniz relied on it.

It did not meet for the first two years of the Trump administration, but Perry in 2019 appointed members, many of them with experience in the oil and gas, nuclear, and reliability sectors.

The meeting yesterday was Brouillette’s first and had been relocated to Washington from Houston after a large energy conference, CERAWeek by IHS Markit, was canceled amid growing concern over the new coronavirus (Energywire, March 2).

DOE hasn’t had any employees diagnosed to date with COVID-19, caused by the virus, Brouillette said, despite potential exposures at two of its national laboratories.

"It’s a very interesting time, to put it politely, with regard to this pandemic," Brouillette said.

Brouillette said he’s appointed Chris Fall, a biologist and director of the department’s Office of Science, to lead DOE’s response to the virus.

The Department of Energy’s Lawrence Livermore National Laboratory earlier this week scrapped business travel and most visits to the lab until the end of the week as it returned to full operation after an employee self-quarantined after being exposed to someone with the virus. The employee later tested negative for COVID-19.

The laboratory will allow mission-critical domestic business travel starting Monday and allow visitors, but it is discouraging large groups, said Lynda Seaver, a spokeswoman for the laboratory.

Another person at the National Renewable Energy Laboratory in Golden, Colo., also tested negative for the virus, DOE said.

The two potential COVID-19 cases arose late last week as DOE decided to impose restrictions on international travel and asked employees to defer meetings with people who live in or have recently traveled to countries hit hard by the disease (Energywire, March 9).

Brouillette noted that several of the department’s laboratories are researching the virus, including the Oak Ridge National Laboratory in Tennessee, which has been able to examine the virus’s protein strands and determine that there may be off-the-shelf drugs available to treat the virus.