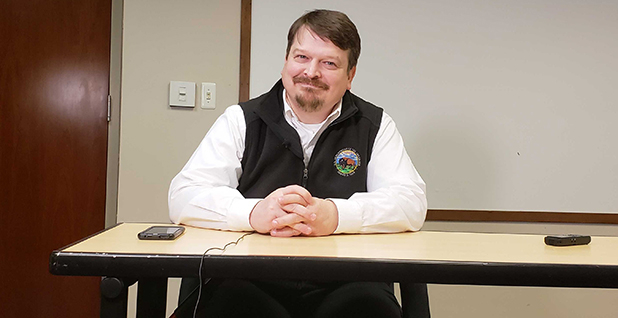 Joe Balash, the former Interior official who led plans to expand oil drilling in Alaska before stepping down last month, told E&E News yesterday his decision to join an oil company active in the state was a personal one.

He said the move gave him a chance to go home while also providing income that would allow his oldest son the option to attend college. Balash started shopping for job options earlier this year.

The Papua New Guinea-based firm Oil Search Ltd., which is part of a revitalization of oil production along Alaska’s North Slope, "first talked to me about coming to work there [through a search firm] back in May," Balash said. "I filed my forms with the Ethics Office the next day."

He added that "financially, I was going to need to make a change in 2020 regardless of the election."

Balash’s unexpected jump to an industry role immediately after resigning from his Senate-confirmed position as an assistant secretary at Interior has raised eyebrows and ethics questions (Greenwire, Sept. 4). His last day at the agency was Friday.

Balash was one of the highest-ranking officials in the Trump administration directly involved in carrying out the White House’s energy dominance agenda. The Alaskan had a guiding hand in historic changes for his home state, like the planned oil and gas lease sale in the Arctic National Wildlife Refuge (ANWR).

Then, he quit to take on his new role as vice president of external affairs at Oil Search.

Experts say there’s nothing barring Balash from going to work for an oil firm right out of a government job overseeing the oil and gas industry. But he would be obliged to follow certain laws.

First, he had to recuse himself from anything having to do with that firm immediately upon talking to Oil Search about a job.

Second, for the next five years, he’s obliged to refrain from lobbying directly to Interior.

Balash said yesterday that he’s met both commitments and that it would be easy to stay in line with the rules, given that the oil firm is operating on state and native lands.

"There weren’t any matters that came before the department during my recusal period," the former commissioner of Alaska’s Department of Natural Resources said.

Balash met with Oil Search in January of last year, according to his schedule, for a "meet and greet."

"Oil Search is slated to be a large player in Alaska Oil development," the schedule states.

He later had a video call with Keiran Wulff, president of Oil Search Alaska LLC, in April.

Balash said those meetings were both courtesies.

"They didn’t need to brief me but were advised to include me on their list when they visited D.C.," he said.

As for lobbying efforts, Balash said he can keep in contact with Interior’s ethics office for the next five years and plans to do so.

"The company won’t have much (if any) need to engage DOI. If they do, I will be certain to seek guidance from DOI Ethics to ensure I stay on the right side of things," he said.

The Washington Post reported yesterday that Balash said he would not lobby himself, but may oversee people lobbying Interior.

Balash’s support for oil production in the far north has garnered significant criticism from environmental groups through his tenure.

"This is just further proof of the corruption and greed that have plagued this administration’s Arctic drilling plans from the beginning," she said of his move to Oil Search.

Others saw Balash’s decision as reflecting the revolving door between government and industry, an issue that has drawn heightened scrutiny amid the Trump administration’s efforts to embrace fossil fuels.

"The Interior has shown a disregard for the spirit if not the letter of ethics rules," said Brendan Fischer, director of federal reform at the Campaign Legal Center, who said industry ties undermine confidence that the government is working for Americans and not "wealthy special interests."

Liz Hempowicz, director of public policy for the Project on Government Oversight, said that concerns about Balash’s move go beyond questions of legality.

"One of the things to keep in mind is that it doesn’t have to be illegal to be unethical," she said.

Balash worked as assistant secretary for land and minerals management from his Senate confirmation in December 2017 until Aug. 30. The position is one of five assistant secretaries that answer directly to Interior Secretary David Bernhardt.

The Alaskan brought a steadfastly pro-drilling focus to his work, carrying out the White House’s energy dominance agenda under both Zinke and Bernhardt. That included a push for historic changes for industry in Alaska, which has faced steadily declining production from its mammoth oil field on the North Slope.

In a long Facebook message explaining his reason for taking the Oil Search job, Balash wrote yesterday that leaving public service was difficult. He said he questioned at the last minute whether he should stay long enough to finish some of the larger projects, like the ANWR lease sale.

But at Oil Search, Balash told E&E News he can still be a part of something that is good for Alaska — and he can do it from home.

"When an opportunity to go home came along, I couldn’t pass it up," he said.