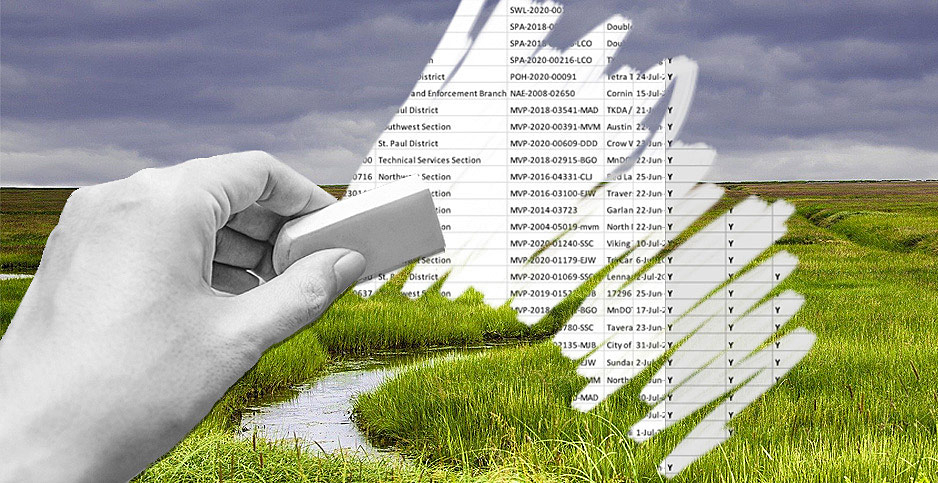 More than 70% of U.S. waterways reviewed under a controversial Trump-era rule could be permanently damaged after they were not afforded federal protection, according to Army Corps of Engineers data obtained and reviewed by E&E News.

The agency reviewed 55,519 waters and water features since the Navigable Waters Protection Rule took effect in June under the Trump administration. Of those, more than 40,000 did not qualify for federal protection under the Clean Water Act.

Such "jurisdictional determinations," good for five years, pave the way for mining companies, developers and property owners to obtain permits to fill or dredge streams, tributaries, lakes and wetlands, ditches, swales and stormwater ponds. Wetlands and streams that are not given federal protections can be damaged and destroyed forever, along with their abilities to sequester carbon and protect downstream water quality.

The internal agency data reviewed by E&E News shines a bright light on the Trump administration’s regulatory definition of "waters of the United States," or WOTUS. While the rule was touted as providing clarity among farmers and industry, the language has drawn legal and political challenges as it rolled back protection for millions of acres of wetlands and streams.

While some states may have their own rules to protect wetlands and waterways no longer covered by the Clean Water Act, many do not, and some state regulators have even been prohibited by their legislatures from enforcing standards stricter than the federal government’s (Greenwire, Jan. 21, 2019).

What’s more, an EPA database is fueling concerns that the number of unprotected wetlands may be much higher.

In a brief filed yesterday in the U.S. District Court for the District of South Carolina, the Southern Environmental Law Center cited an EPA database that shows 91% of waters EPA reviewed under the Navigable Waters Protection Rule didn’t qualify for federal protection.

"We understand that the corps has internal data suggesting that 72% of waters were found to lack protection, but that data is likely skewed to the extent it includes Rivers and Harbors Act determinations," said Kelly Moser, a senior attorney at the center and a leader of the group’s Clean Water Defense Initiative.

"Under either data set, the blow to streams, wetlands, and other waterways is striking," said Moser. "We encourage the corps to publicly disclose its data so the full scope of devastation caused by this rule is clear, and urge EPA to promptly restore Clean Water Act protections given the harm underway."

The Army Corps’ rate of decisionmaking has also picked up. The agency is now making determinations at the fastest pace in five years, according to an E&E News analysis. Since June, the Army Corps has made more than 5,300 jurisdictional determinations — the highest number since 2016.

Yet that recent pace isn’t unprecedented, and the agency’s quick work hasn’t made up for the impact of a 2016 court ruling that drastically slowed such decisions after leaving them legally vulnerable. Doug Garman, a spokesperson for the Army Corps, noted that in 2008, the corps made more than 47,000 jurisdictional determinations.

"Pent-up demand in anticipation of the new rule and/or the fact that most applicants typically only request an [approved jurisdictional determination] if they think a water is not jurisdictional" could have driven the recent uptick, said Garman.

But former federal officials with expertise in wetlands say the increase — even as the economy struggles — is likely a combination of the agency acting faster and companies flocking to the corps to get approvals before the Biden administration scraps the Trump rule.

"They’re racing to get their foot in the door before it closes," said Ellen Gilinsky, a former wetlands consultant and associate deputy assistant administrator for water at EPA under the Obama administration. "And it will close."

The Biden administration has already marked the Trump administration’s WOTUS rule for review to determine whether it’s in the national interest.

Now, advocates are eager to see what next steps EPA will take, including managing a lengthy rulemaking process and considerable pushback from industry. EPA and the Army Corps write the Clean Water Act regulations jointly.

According to the Army Corps, it reviewed 55,519 waters and water features under the Trump rule.

Of those waters, the agency determined 15,438 were jurisdictional under Section 10 of the Rivers and Harbors Act and/or Section 404 of the Clean Water Act.

When asked about the Army Corps’ regulatory decisions, EPA declined to comment, citing the ongoing review.

"At this time, we can’t say too much, because as you know, the Navigable Waters Protection Rule is currently under review in accordance with the Biden-Harris administration’s Executive Order 13990," said an EPA spokesperson.

"We will follow the science and the law in the review of this rulemaking and in the review of other actions issued under the previous administration to ensure that they protect public health and the environment," the spokesperson said. "Generally, EPA and the Army Corps coordinate on these and many other issues."

Still, EPA’s own data continues to generate questions about the actual extent of the rollbacks under the Trump administration — a debate that’s playing out in court.

SELC and other environmental groups argued in court documents that EPA’s database shows the Army Corps in 2015 found that 58% of the waters evaluated under the 2015 Clean Water Rule were found to lack jurisdiction.

They also expressed concern that under the Navigable Waters Protection Rule, projects like a controversial mine on the border of the Okefenokee Swamp in southeast Georgia are moving forward, as is the proposed RiverPort development, a major mixed-use plan in Jasper County, S.C., on the border of the Savannah National Wildlife Refuge.

When asked about differences between Army Corps data and EPA’s website, Gorman said the corps’ database contains the "correct numbers."

Melissa Sullivan, a spokesperson for EPA, said the website is only being populated by data from the Army Corps’ database, and that the agencies are coordinating to ensure the information is aligned.

"EPA is closely coordinating with the Army Corps to align the information contained in and reported by the corps’ ORM database and EPA’s beta Clean Water Act Approved Jurisdictional Determination website," she said. "For example, we are working with the corps to reconcile differences resulting from recent changes to the values for certain fields in the ORM database as a result of the Navigable Waters Protection Rule."

EPA Administrator Michael Regan told senators during his confirmation hearing last month that he planned to hear from all stakeholders to ensure that any final WOTUS regulation is clear and understandable, and not overly burdensome.

But he also took a shot at the current Trump regulation and its effect on vulnerable wetlands like North Carolina’s bays, small depression wetlands that were left unprotected under the most recent Trump revisions.

"What I saw with the 2019 rule was a rollback that went even further back than presidents of both of our parties," Regan told Sen. John Boozman of Arkansas, the ranking Republican on the Senate Agriculture, Nutrition and Forestry Committee (Greenwire, Feb. 4).

As Biden appoints new leadership at the Army Corps, sources say, the number of jurisdictional determinations being made could slow until the fate of the WOTUS rule is clear.

Stephen Dawson, chief counsel of Dawson & Associates, a firm that specializes in federal water permitting, said changes in the pace of decisionmaking are typical of administration changes, namely because developers hungry for certainty don’t want to invest in projects that may not see the light of day.

"I think this is just a trend with the administration changes, and it doesn’t matter who’s coming in or out; the regulated community doesn’t want to invest a bunch of money when the goalposts are moving," he said.

Gilinsky said she would welcome a slowdown and expressed concern that Army Corps data shows the agency is moving quickly to make decisions without conducting on-site inspections in some cases.

The Navigable Waters Protection Rule, she noted, narrowed the scope of Clean Water Act protections by limiting federal jurisdiction to waters that flow year-round or intermittently, and to wetlands adjacent to such waters.

Gilinsky said that historically, determining the existence of an ephemeral stream would require in-person inspections. But since June, the corps data shows, there were 1,846 jurisdictional determinations that didn’t qualify for federal oversight that were ephemeral or non-adjacent wetland. Some of those decisions were made within a day’s time without on-site visits.

Garman said it’s possible that site visits were conducted prior to the determination being made and possibly not reflected in the database.

Another reason the database may show that a decision took only one day is that the staff may have already been working on a project, and the developer didn’t request a determination until after the Army Corps had already been to the site for some other reason.

"You can’t see an ephemeral feature on a map," she said. "You have to go out and look at it."