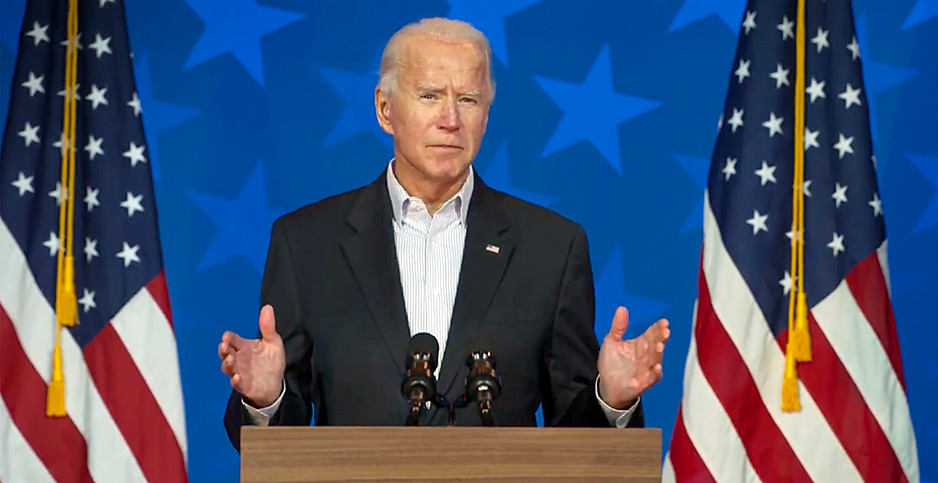 If Democrat Joe Biden moves into the White House next year, the path to action on climate and the environment will likely run through the executive branch.

Senate control remains in limbo, but if Democrats lose just one of the two special elections in Georgia in January, Republicans will keep the upper chamber, leaving a difficult path for environmental legislation.

Biden’s allies said they’ll be pushing him to flex the powers of the presidency immediately in hopes that a quick move to regulate can avoid rollbacks by a future Republican president.

"There’s lots of opportunity for him to use executive authority to look for setting standards, to look for federal investments in technologies and advanced battery storage, to get the grid constructed in an infrastructure investment," said Gina McCarthy, president of the Natural Resources Defense Council and a former EPA administrator.

"There is ample opportunity for significant benefits moving forward, and you can do that without the consent and authority of the legislature," McCarthy said during a postelection event with reporters yesterday.

That, of course, was the strategy the Obama administration, led in part by McCarthy, pursued after Democratic attempts to legislate on climate change fell short in 2010.

EPA finalized the Clean Power Plan in 2015, shortly after the world adopted the Paris climate agreement, but the Supreme Court almost immediately issued a stay, and the Trump administration eventually rolled it back for a more modest power plant greenhouse gas regulation.

President Trump has also scaled back Obama-era auto fuel efficiency standards and the 2015 methane rule, not to mention some of President Obama’s national monument designations.

Observers said the experience highlights the dangers of an executive approach, particularly for climate policy, because the next administration could easily erase any new regulations made in the next four or eight years.

"I have long argued that we need to get back to legislating for precisely that reason," said Paul Bledsoe, a former Clinton climate adviser who sits on the executive committee of Clean Energy for Biden. "However, assuming a Republican Senate is recalcitrant, I think Biden will initiate key regulatory actions as soon as humanly possible so that they have a better chance of enduring."

Bledsoe added, "The longer the rules are in place, the harder they are to overturn, so that’s one of the lessons from the Obama era."

Regardless of Senate control, "time is your enemy if you’re trying to do executive action," said Brett Hartl, government affairs director at the Center for Biological Diversity.

Businesses direct long-term investments based on what they believe the regulatory environment will be. Bledsoe pointed to investment shifts by utilities in the wake of the Clean Power Plan, even though it never went into effect.

And standards promulgated at the end of a presidential term are always in danger of repeal via the Congressional Review Act, which allows Congress to overturn regulations with a simple majority vote. Republicans used the CRA to repeal 14 Obama-era regulations at the beginning of Trump’s term in 2017.

Hartl added that using more established authority under the Clean Air Act, even if it’s not to directly regulate greenhouse gases, could ultimately have more durability.

Revising National Ambient Air Quality Standards curtailing particulate matter and nitrogen oxides could all have a "huge impact on the oil and gas sector," Hartl said.

"They can accomplish a lot, and the big question is, do they basically repeat the same mistakes Obama made?" Hartl added.

While uncertainty still reigns about Senate control, one thing is clear: Biden will rejoin the Paris Agreement.

The former vice president has pledged to do so throughout his campaign, and even though the U.S. formally withdrew earlier this week, rejoining is a relatively simple administrative process.

It’s the "first real thing that we know he will do" and a move industry will likely support, with major trade groups like the U.S. Chamber of Commerce already on board with the agreement, said Frank Maisano, a senior principal at Bracewell LLP.

The next steps, however, get more complicated. For one thing, the United States is not currently on track to meet its original targets under the agreement.

"It’s unclear whether or not the executive orders that the Biden administration could implement would put us fully back on track or merely close part of the gap," said Jonathan Pershing, program director of environment at the William and Flora Hewlett Foundation and a former special envoy for climate change at the State Department.

The United States would also need to make new, more ambitious Paris targets for 2030, which it could struggle to meet without the prospects for major legislation (Climatewire, Nov. 5).

But even outside of Paris, "his greatest latitude lies in international policy," Bledsoe said. "There is a whole series of major international issues that have been utterly neglected under Trump."

On the domestic front, observers said there are a few obvious early moves. Biden could move to restore Bears Ears National Monument to its original size; halt Trump’s proposal to open up logging in the Tongass National Forest; and restore Obama-era methane standards, which were largely supported by the oil and gas industry.

"We would expect the Biden administration to move forward with an end to fossil fuel leases on public lands," Brune said.

The federal government could also use its huge purchasing power to boost clean energy, said Josh Freed, senior vice president for the climate and energy program at Third Way.

"That would also include restoration of the Department of Defense’s leadership on climate and incorporation of them into innovation and purchase and deployment," Freed said.

But the regulatory agenda won’t "be as easy as everybody thinks it is," Maisano said.

With Trump leaving more conservative courts in his wake, the judiciary is likely to be less flexible with EPA authority.

And if the Biden administration wants its regulatory agenda to hold up, it will have to be much more methodical about process than Trump was over the last four years, Maisano said.

"And that means that it’s going to take a little more time than just walking in the door and changing all the rules that they face."

Meanwhile, Congress won’t be entirely inactive, even if a Republican Senate is unlikely to pass a carbon tax or a major regulatory overhaul.

Energy innovation programs — like the Department of Energy’s Advanced Research Projects Agency-Energy — have seen bipartisan support in the appropriations process in recent years.

Environmental and industry groups are also watching for any climate- or clean energy-related provisions that could be tacked on to larger infrastructure or COVID-19 relief bills, which will likely be the top focus early next year (E&E Daily, Nov. 5).

"There is a road map for some things to get done if the country is put first, and that includes appropriations," Freed said. "Funding for clean energy innovation has continued to go up because Republicans and Democrats have been supportive of that over the last 40 years in Congress."

Biden is a creature of the Senate, with institutional knowledge and good relationships with members on both sides of the aisle, which could help in a time when the margins in both chambers are likely to be razor-thin, Maisano said.

Senate partisanship will determine whom Biden can get confirmed to lead the agencies. "Personnel is policy," League of Conservation Voters President Gene Karpinski told reporters this week.

"So obviously the choices they make in terms of personnel in these next couple months are also critically important."

Once names start trickling out, it will be easier to tell just how aggressive the Biden administration will be in the executive branch, Maisano said.

"Once we see who their EPA administrator is, who DOE’s head is, who’s going to run the Interior Department — those type of selections and the people that they pick are going to give us a better read on what early actions we’ll see in the first six months of the administration," Maisano said.