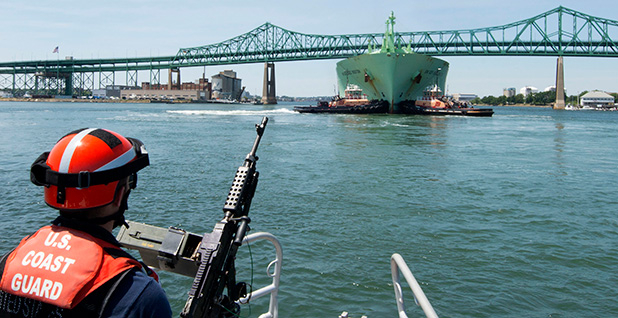 Typically, when a power plant announces its retirement, the local grid operator issues a short, dry document that amounts to a laconic goodbye.

Not in New England, where grid manager ISO New England is urging federal regulators to act quickly on a proposal to rescue four fossil-fired power plants in the Boston metropolitan area.

Why the haste? Fuel security.

In March, Exelon Corp. announced a full shutdown of the Mystic Generating Station, a combination of oil and gas generators with about 1,700 megawatts of winter capacity. Exelon said these units weren’t getting paid for the fuel security they provided to the grid.

This month, ISO-NE responded with an urgent request to the Federal Energy Regulatory Commission. Without Mystic, it said, New England could also lose the major liquefied natural gas terminal that supplies it — a double whammy posing "unacceptable fuel security risks."

ISO-NE is asking FERC for permission to temporarily charge New England ratepayers for the cash needed to keep Mystic’s natural gas units running, until the region finds a permanent solution for its fuel problems. Last week, Exelon submitted a filing containing its plan to do so.

The case illuminates all of the issues that have yet to get worked out in New England, as stakeholders continue to debate which fuels are to be part of the region’s energy transition. Some believe the region needs more pipelines to partake of the shale gas revolution; others believe pipelines would stifle renewable energy. Some think nuclear is part of the solution; others don’t.

The debate echoes Energy Secretary Rick Perry’s view that generators with on-site fuel, such as nuclear and coal, deserve special compensation. That’s a particularly salient problem in New England, which tends to run short on fuel each winter.

Worsening the issue, with coal, oil and nuclear units retiring in the near term, there isn’t a lot of time to decide. In January, ISO-NE put out a report warning that the region needs a long-term solution to its fuel woes or else rolling blackouts could be in store.

That might be the only thing everyone agrees on: that what’s needed is a durable market model that says what’s valued — reliability, carbon, security — and what each value is.

As Mystic shows, the problem they’re trying to solve is already here in some ways and already forcing uncomfortable choices.

Dan Dolan, the president of the New England Power Generators Association, wouldn’t opine on the merits of the Mystic application. "But if this type of a waiver is going to be granted by FERC, I want to ensure there isn’t a need to do this again next year for more plants," he said.

Mark LeBel, a staff attorney at the Acadia Center, didn’t take a position on the Mystic application, but he warned that the region needs to handle the fuel issue systematically, not a la carte.

"There are a lot of important questions around this. We don’t want nuclear generators in the region to threaten to retire in order to get similar treatment," he said. "We want to find a fair, technology-neutral, market-based approach in order to meet our reliability needs."

Often, the loss of an individual power plant can be absorbed by the rest of the grid, especially in a place like New England, where electricity demand is flat to falling. But Mystic has taken on outsize importance, according to ISO-NE.

The reason is that Mystic gets all of its gas from a single LNG import terminal in Everett, Mass. If Mystic were to close, ISO-NE has said, this LNG terminal would lose its largest customer. That would cast its own future into doubt, meaning that a region that is already fuel-constrained would be at risk of losing not one, but two of its major energy sources at the same time.

According to ISO-NE’s reference model, that could mean "load shedding" throughout the grid for a week. But some critics describe ISO-NE’s modeling as too conservative, saying that the worst scenarios are unlikely and that clean energy sources are given short shrift.

For now, ISO-NE is arguing to FERC for urgent support. The grid operator is asking FERC for permission to authorize tariffs in the name of reliability issues tied to fuel security — an authority it does not currently have.

With a two-year bridge, ISO-NE said, stakeholders can devise a "market-based fuel security solution for the region." It has asked FERC to act by July.