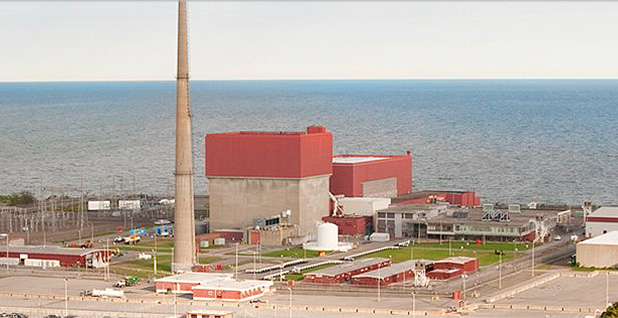 Exelon Corp. agreed to purchase the FitzPatrick nuclear plant for $110 million only after New York regulators agreed to subsidize the facility and two other Exelon nuclear plants to help the state achieve its carbon-reduction goals. Payments for the first two years of the 12-year program will total almost $1 billion. Photo courtesy of Entergy Corp.

Even before the first counterpunch to New York’s plan to subsidize a trio of upstate nuclear power plants in the name of fighting climate change, the beneficiary of almost $500 million in annual payments is airing its legal defenses.

Chicago-based Exelon Corp., owner of the R.E. Ginna and Nine Mile Point plants and the soon-to-be-owner of a third plant, James A. FitzPatrick, said it has vetted all of the potential arguments its opponents could raise and its defense is airtight.

"Given the importance to the company, we’ve gone through these legal theories in great detail and each of the potential challenges," William Von Hoene, Exelon’s senior executive vice president and chief strategy officer, said in a recent presentation. "And we will have the challenges."

Exelon is on the same page as New York’s Public Service Commission, which designed the policy to avoid specific legal tripwires. Experts say there’s likely to be a court challenge anyway, if only because of the money at stake and the precedent it could establish. If it survives, the plan could be a blueprint for other states to achieve the same policy goals, even after similar efforts have been blocked by judges and regulators.

This year, the U.S. Supreme Court overturned a Maryland incentive program for new gas-fired generation because it strayed too far into federal jurisdiction over wholesale electricity markets (Greenwire, April 19). And the Federal Energy Regulatory Commission blocked a plan approved by Ohio regulators to subsidize utility-owned coal and nuclear plants because it clashed with affiliate transaction rules (EnergyWire, April 28).

The New York PSC approved its clean energy standard (CES) on Aug. 1, formalizing the state’s goal of getting half its power from renewable energy by 2030. Toward that end, the CES will subsidize three nuclear power plants, giving more time for wind and solar power to develop in New York.

Despite nuclear’s place as a carbon-free source of bulk power, some environmental groups, rival generators and consumer groups are pushing back against the subsidy, and any or all of them could launch legal challenges. Those could come at the PSC, New York Supreme Court or FERC.

Speaking at Exelon’s analyst day in New York, Von Hoene ticked off each of the possible avenues to block or overturn the PSC decision.

But he began by noting a court ruling that validates the use of the U.S. government’s Interagency Working Group’s "social cost of carbon." In its order, the 7th U.S. Circuit Court of Appeals upheld the use of the government’s estimate for carbon’s economic damage in a challenge to new Department of Energy standards for commercial refrigeration equipment (Greenwire, Aug. 9).

The ruling demonstrates that the social cost of carbon isn’t "funny science," he said. And that’s important because "it’s obviously the linchpin of what will happen in New York with regard to the calculation of the payments that we will receive for running the nuclear plants."

New York’s zero-emissions credit (ZEC) program will be administered in six two-year periods, and electricity retailers will purchase credits from the New York State Energy Research and Development Authority (NYSERDA) in proportion to their load.

During the first two-year "tranche," three nuclear plants will receive payments under a formula based on the social cost of carbon and the megawatt-hours of energy they produce.

Von Hoene told analysts the most important consideration regarding potential legal challenges to the plan is that it’s "indistinguishable" from renewable energy credit (REC) programs that have been "blessed" by the states and the courts.

Just as an REC represents the environmental attributes of a megawatt-hour of wind or solar energy, a ZEC is the same for nuclear energy.

"It is a REC program for nuclear," Von Hoene said. "It’s a credit that’s tied to production, not wholesale market participation. Nowhere in the country has an REC program, on the theories that have been advanced now, ever been successfully challenged."

What’s more, Exelon noted, FERC in an order four years ago said REC programs and sales of RECs unbundled with electricity fall outside its jurisdiction.

In its final order, New York’s PSC said it had legal authority to approve the clean energy standard and, moreover, that it had been designed to avoid trampling on FERC’s turf. The order, however, noted: "States may encourage production of new or clean generation through measures ‘untethered’ to a generator’s wholesale market participation."

Regulators moved quickly to finalize the clean energy standard. Entergy Corp., the owner of FitzPatrick, planned to shut the plant in January. Exelon was willing to buy it and add to its nuclear fleet, but it wanted clarity about what their economics would be.

The purchase remains contingent on approvals from state and federal regulators. In the meantime, Exelon will refuel the plant in January if certain conditions are met, including the clean energy standard being in full effect and the execution of an NYSERDA contract that guarantees an additional income stream.

On July 8, the state Department of Public Service proposed its plan to rescue the nuclear plants with ZECs. The plan contemplated nearly $1 billion in subsidies for the first two years. It said the $4 billion net benefit, largely from cutting carbon, was worth it.

Opponents said the process moved too fast given the high stakes. They’ve said it’s dubious to peg the subsidy to the social cost of carbon, and that it will lead to burdensome costs for large energy users, like manufacturers. And some environmentalists have objected to any support for nuclear power in a policy meant to advance renewable energy.

Legal fight on the horizon?

What remains unclear: Will any of the objections lead to a formal legal challenge?

A group of upstate manufacturers submitted a 35-page brief objecting to aspects of the CES. But a lawyer for the group said he had no comment on a suit. Another group of merchant power plants, including Calpine Corp., said in a filing last month that the CES was a plain step into FERC jurisdiction. But the group did not comment with regard to a legal challenge.

Experts said it’s only been two weeks, so these suits are probably still in the works.

Parties have 30 days to petition the PSC for a rehearing, said Jon Sorensen, a spokesman for the Department of Public Service. They have four months to challenge a decision at the New York Supreme Court.

At FERC, parties could lodge a complaint at any time, asserted Tyson Slocum, energy program director at Public Citizen, a consumer watchdog.

What might be the substance of such a challenge? "We do expect opponents to challenge the order both on administrative process as well as the merits," said Fox of ClearView.

That opens many angles of attack, though not all of them are equally likely. Some parties question how regulators set the amount of the nuclear subsidy. At first, it was based on the cost of running the reactors. They ultimately decided to use the social cost of carbon.

Whether the recent appellate court ruling validates the social cost of carbon metric, some critics say the PSC staff didn’t allow enough time for parties to vet the formula.

"Two business weeks is a wholly inadequate amount of time for parties to review, evaluate and comment on a proposal that is projected to result in billions of dollars in costs and with a newly-created methodology for calculating ZEC prices," the National Energy Marketers Association said in a filing last month.

The PSC’s timetable violated the state’s Administrative Procedure Act, NEMA said. It declined to comment on a possible challenge to the CES.

Exelon is also bracing for challenges that claim the PSC strayed too far into FERC’s jurisdiction.

Calpine joined a group of power generators that last month cited the Supreme Court’s decision in Hughes v. Talen Energy Marketing LLC and said New York is making the same mistake Maryland did: interfering with wholesale power markets. But some lawyers say New York might have avoided this legal trap by using a different mechanism to support power plants.

"In Hughes, Maryland was focused on the money that would be needed to prop up companies, to help them survive in the face of changing markets," said Denise Grab, senior attorney at the Institute for Policy Integrity at New York University’s School of Law. "New York’s final CES decision does what it can to stay away from that approach; instead, it focuses on properly valuing the low-carbon attributes of nuclear plants separate from the wholesale markets."

The April court order, she said, was carefully crafted to leave states room to craft their own policies.

"It was clear the Supreme Court wanted to reserve the option for states that were trying to tackle clean energy policy to have a way to do that," Grab said.

Cuomo: a ‘warrior’ for N.Y. nuclear

Von Hoene said the New York plan is also significantly different from rulings by the Public Utilities Commission of Ohio. The PUCO orders authorized subsidies for American Electric Power Co. Inc. and FirstEnergy Corp. plants that varied based on whether the units were profitable.

Ultimately, FERC blocked the Ohio plans from taking effect because they would have been funded by all of the utility’s electricity customers, including those who switched energy providers. The commission said that violated terms of affiliate waivers granted to AEP and FirstEnergy years earlier.

The New York program "is not, unlike Ohio, a contract for differences," Exelon’s Von Hoene said. What’s more, there are no affiliate contracts involved.

Not only does Exelon believe it has an answer to any possible legal challenge, but the company said public and political support for the program is hard to ignore.

And the champion for the ZEC program is none other than Democratic New York Gov. Andrew Cuomo, who, the company said, would have been characterized as an anti-nuclear governor only months earlier for his opposition to relicensing the Indian Point nuclear plant.

Said Von Hoene: "He has become the warrior for this."