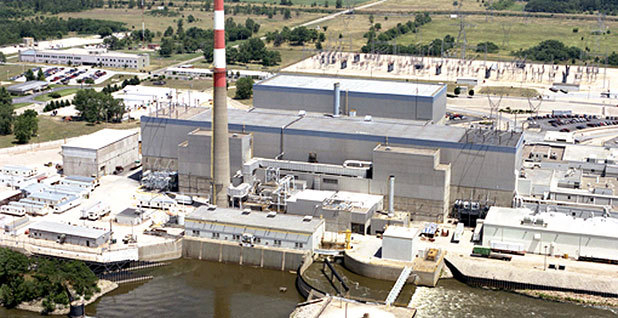 Exelon Corp.'s 1,871-megawatt Quad Cities nuclear plant on the Mississippi River is among those at risk of early retirement unless the Illinois Legislature approves a measure this month that would require consumers to provide millions of dollars a year in aid to help keep it profitable. Photo courtesy of Exelon.

The nation’s largest nuclear operator put on the full-court press yesterday in Washington, D.C., and Springfield, Ill., for policies to keep some its struggling plants afloat amid increasing competition from wind energy and a glut of cheap shale gas that’s depressing energy prices.

Chicago-based Exelon has threatened for more than two years to shut money-losing plants in an effort to prod state lawmakers to act. In New York, Democratic Gov. Andrew Cuomo’s administration has come to the rescue with an evolving plan to help existing plants survive the downturn in energy markets (EnergyWire, March 18). In Illinois, Exelon is proposing a similar remedy, but it remains to be seen if the General Assembly will come to the rescue.

Earlier this month, Exelon’s chief executive, Chris Crane, said he has authority from the board to shut the "distressed assets" if lawmakers don’t approve a proposal requiring up to $290 million a year in subsidies from Illinois consumers to keep them profitable.

The company offered a revamped proposal on May 5 and gave the Legislature until the end of the month to pass it (EnergyWire, May 6). If not, the 1,087-megawatt Clinton plant would be closed when its obligation to run ends a year from now, Crane said. The Quad Cities plant is required to run an extra year, but unless the bill passes or the plant clears this year’s PJM Interconnection capacity auction for 2018-19, it, too, will be shut down.

If Exelon’s nuclear proposal isn’t complex and controversial enough, it is woven into a sweeping, 316-page energy bill that would rewrite Illinois energy policy.

Among many other changes, the bill would authorize millions of dollars for microgrid projects, change solar net-metering rates, aggressively expand energy efficiency programs and usher in new rate design for residential customers that would be a first-of-its kind in the country.

The bill was the subject of a 3 ½-hour hearing yesterday afternoon before the state’s Senate Energy and Public Utilities Committee, which did not take a vote.

Exelon officials who testified before the committee said the latest nuclear proposal to create a zero-emission standard was crafted in response to criticisms about another measure filed last year.

The revised proposal, they said, would provide additional consumer protections and more targeted aid to just the Clinton and Quad Cities plants. The plants would receive additional revenue only if state regulators determine the units would lose money based on projected revenues and costs.

"We are unable to sustain those type of economic losses any longer," Tim Hanley, the company’s senior vice president of nuclear projects, told the committee.

If the plants shut down, it would lead to higher energy prices, thousands of direct and indirect job losses, and millions of dollars in lost tax revenue for local and state government, company officials and supporters said.

The closure of even one of the nuclear plants would also make it more difficult for the state to meet its carbon reduction obligations under U.S. EPA’s Clean Power Plan, they said.

Exelon’s claims were challenged, however, by consumer groups including AARP and by the Illinois attorney general, as well as by Illinois industrial energy users and downtown Chicago building owners. The same groups opposed the nuclear proposal a year ago.

Cara Hendrickson, an assistant attorney general, told committee members the measure was nothing more than "another nuclear bailout, dressed up differently."

Yesterday’s hearing intersected with a summit hosted by the Department of Energy in Washington, D.C., that focused on solutions to help preserve existing nuclear plants like the Illinois reactors that are facing financial pressures from low energy prices.

The theme of the meeting among industry executives and supporters, including Energy Secretary Ernest Moniz, was urgency. There are currently 10 to 15 plants that could face early retirement over the next five to 10 years, which would undermine the carbon reductions gained from the boom in solar and wind development.

"We are supposed to be adding zero carbon resources, not subtracting or just replacing them," Moniz said.

To illustrate the challenges faced by some nuclear plants, particularly single-reactor plants or certain plants in the Midwest, where wind penetration is highest, executives pointed to Exelon’s 1,871 MW Quad Cities plant along the Mississippi River.

"Quad Cities produces at 2.8 cents per kilowatt-hour, and Exelon may have to shut it down for dysfunctional market conditions," said Marv Fertel, executive director of the Nuclear Energy Institute.