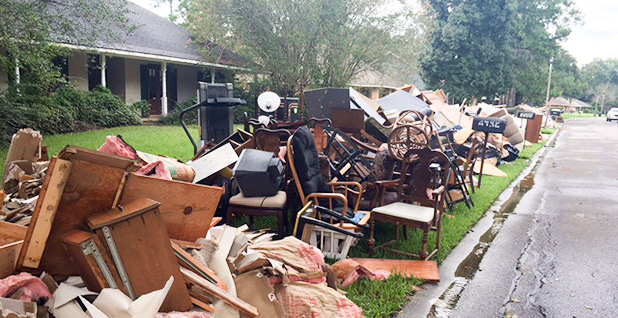 More than 60,000 homes were ravaged by floods in and around Baton Rouge last week and residents have only just begun to gut homes and search for salvageable possessions. Photo by Emily Holden.

Thousands remain in shelters, but homeowners who are able are hard at work with volunteers and contractors emptying homes and ripping out wet Sheetrock as President Obama prepares to visit tomorrow. The flooding has killed at least 13 people and displaced tens of thousands, many of whom had to evacuate their homes in boats.

"The President is mindful of the impact that his travel has on first responders and wants to ensure that his presence does not interfere with ongoing recovery efforts," a White House press statement said, explaining why Obama did not make the trip sooner. Republican presidential nominee Donald Trump, who toured the devastated region Friday, signed hats and slammed Obama for his absence.

The heads of the Department of Homeland Security and the Federal Emergency Management Agency took separate trips to the region last week and have been briefing the president, who has been on vacation in Martha’s Vineyard.

The White House said Obama is "eager to get a first-hand look at the impact of the devastating floods, hear from more officials about the response, including how the federal government can assist and tell the people of Louisiana that the American people will be with them as they rebuild their community and come back stronger than ever."

More than half of the homes in the capital city and thousands in the eight surrounding parishes took on water, including in areas where many residents thought the risk was low and did not buy flood insurance. Figures on the destruction have swelled with each announcement from local officials, who are still trying to grasp the extent of the damages. Upward of 100,000 people have applied for federal disaster aid, while family and friends have taken to social media to ask for help from church groups and volunteer crews for elderly or sick people who are unable to work on their houses.

As the extent of the catastrophe sinks in, visits by politicians are eliciting mixed emotions.

"I think it’s good for us as Louisianans to have people in Washington, D.C., see what the situation is," said Nancy Griffin, a social studies teacher whose house in the Woodland Ridge neighborhood of Baton Rouge took on 18 inches of water.

Speaking as she and friends hauled damaged belongings onto a growing trash heap in her front yard, Griffin said Obama’s visit is appropriate and "would be encouraging to a lot of people."

Chris Collins, who was unloading his parents’ soaked possessions in front of their house, called the trips a mistake.

"It’ll cause more of a distraction," Collins said. "If anything he should’ve sent the Coast Guard. Coast Guard, Army or someone just to go house to house doing what they can, instead of just coming down here for 49 seconds of passing out toys and [holding a] press conference."

Collins and his father yesterday were using the family pickup truck to haul furniture that was taking on the stench of stale sewage water from the back door to a heap on the lawn that will soon block out the street view of the house.

"We don’t need someone high up there," Collins said. "We need hands."

Trump’s visit brought similarly mixed reviews. Many in Louisiana suggested he was using the disaster for campaign publicity while contributing little, although Trump reportedly donated $100,000 to an area church for relief efforts. Others, including Gov. John Bel Edwards (D), said that Trump’s trip put a spotlight on the disaster. Edwards had previously asked that Trump not come if only for a photo op and suggested the president wait a couple of weeks to visit too, in order to avoid requiring security-related road closures.

Some said this weekend that the visits might at least bring more national media attention, which Louisianians have roundly criticized as inadequate and late.

The flood took residents by surprise, swallowing up homes where people never expected to see water.

Griffin said she lost many of her possessions but was able to save a few pieces of furniture and photo albums as she watched water gush out of storm drains and rise overnight.

"We saw the water coming up the night before, and the neighbors across the street were especially nervous about the water because Saturday night by 7 or 8 o’clock it had already gotten very close to their carport," Griffin said. "And they had never seen anything like it in 25 years."

Griffin said she is one of the lucky homeowners who has flood insurance because her house is just inside a 100-year flood line designated by the federal government. The house next door to her, she said, was half inside and half outside the flood zone, according to lines drawn years ago.

Baton Rouge residents have long been aware of the risks from hurricanes, a seasonal concern in the coastal state. But many never expected homes outside of flood zones could take on so much water (ClimateWire, Aug. 18).

The damage is likely far more expansive than the initial Baton Rouge city-parish government estimates suggest. Parts of surrounding parishes, including Denham Springs in Livingston Parish, were devastated by the flood.

One preliminary economic analysis suggests flood waters from historic rainfall one week ago may have affected as many as 110,000 homes in Baton Rouge and the eight surrounding parishes, a third of houses in the region, according to the local newspaper The Advocate.

Matthew Corkern, a contractor with Concept Design Development who is leading a team of 11 workers to gut 11 houses, said Obama’s visit will "keep it in the media, keep it on a national level, so people don’t forget about us."

Corkern’s team is working night and day and sleeping in trucks. His extended family lost nine houses, although his own stayed dry. He estimates the houses on which he is working are 60 percent damaged. The owners lost almost all their possessions.

All the homeowners he’s working with are struggling to get furniture and clothing soaked with dirty water to the curb in time for his laborers to strip the lower halves of the houses to the bones, he said.

While Corkern acknowledged Obama’s trip might be helpful, he largely disapproved of political candidates visiting.

"What’d they come for? They just come to sightsee? I didn’t see them with no shovels, no wheel barrows," he said.