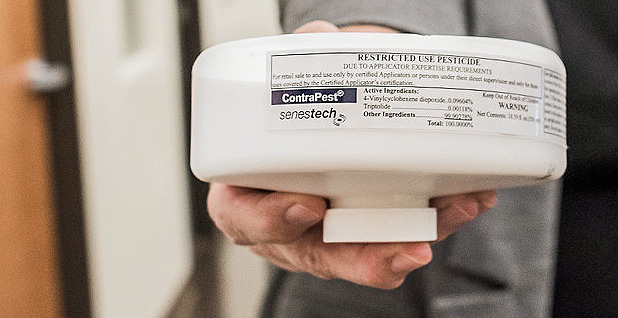 Loretta Mayer, the CEO of Arizona-based SenesTech, holds a sample of the company’s rat-contraceptive formula. It will soon be used on the National Mall as part of a pilot project aimed at controlling the rat population near the Thomas Jefferson Memorial. SenesTech Inc.

The National Mall will soon have something new: rats on birth control.

Under a pilot project set to begin in the coming weeks, a contraceptive bait called ContraPest will be fed to rats around the food kiosk at the Thomas Jefferson Memorial.

The plan is the brainchild of Arizona-based SenesTech Inc., which says it makes more sense to target the reproductive capabilities of rats to try to eliminate them in the long run instead of relying on toxic poisons to kill them immediately.

Calling it "a new paradigm in rodent control," the company says its formula can work on both sexes of rats, inducing egg loss in females and impairing sperm development in males.

"This has been approved by the EPA and has been used in other metropolitan areas, including Chicago and New York City," said Mike Litterst, chief of communications for the National Parks Service’s National Mall and Memorial Parks.

Litterst said the effort will focus on the area near the Jefferson Memorial because it’s easily accessible and isolated from other factors that can affect the rodent population, such as dumpsters from restaurants.

"This method uses fertility control," Litterst said. "So we will not be killing any rats, rather preventing them from reproducing — a means of birth control, if you will."

The issue also has long been a concern for the National Park Service.

Last year, NPS said it wanted to work toward "a rat-free D.C." by partnering with the D.C. Department of Health to control rodents in national park sites throughout the district. Under an agreement that took effect on Oct. 1, 2016, the city health department began inspecting and treating parks and encouraged residents who spotted rats in a national park to call the Citywide Call Center at 311.

As part of the latest rat-fighting effort, SenesTech said it had received its first order for its contraceptive formula from Guest Services Inc., the NPS concessionaire that runs the food operation near the memorial.

Loretta Mayer, SenesTech’s co-founder and CEO, called the project "an ideal situation" for dealing with "an unconquered rodent problem in a public area where sustained use of poison is not optimal."

"With the multiple National Park Service sites in the District of Columbia, this concept launch can provide a coordinated response to this growing problem," she said.

The company said its formula is dispensed in liquid form and breaks down rapidly, unlike other rodenticides that can contaminate the environment and hurt wildlife, livestock and pets.

"Obviously, we would not use this method if it presented a threat to public health," Litterst said.

Litterst said an exact launch date for the project has yet to be set, but added: "It is expected to start in the next few weeks."

The Park Service declined to provide a cost estimate for the pilot project, saying it’s a private matter involving SenesTech and the NPS concessionaire.

"The National Park Service is not expending any funds on this," Litterst said. "It is a contract between two private companies."

NPS officials made a similar argument last week when it was revealed that a gift shop at Shenandoah National Park in Virginia had been selling Trump wine (E&E News PM, Nov. 21).

In that case, the Park Service said it had nothing to do with the sales because the wine had been sold by Delaware North Cos. Inc., the park’s licensed concessioner.

Altogether, the Park Service administers approximately 500 concession contracts with vendors that gross over $1 billion annually at its sites across the country (E&E News PM, March 20).