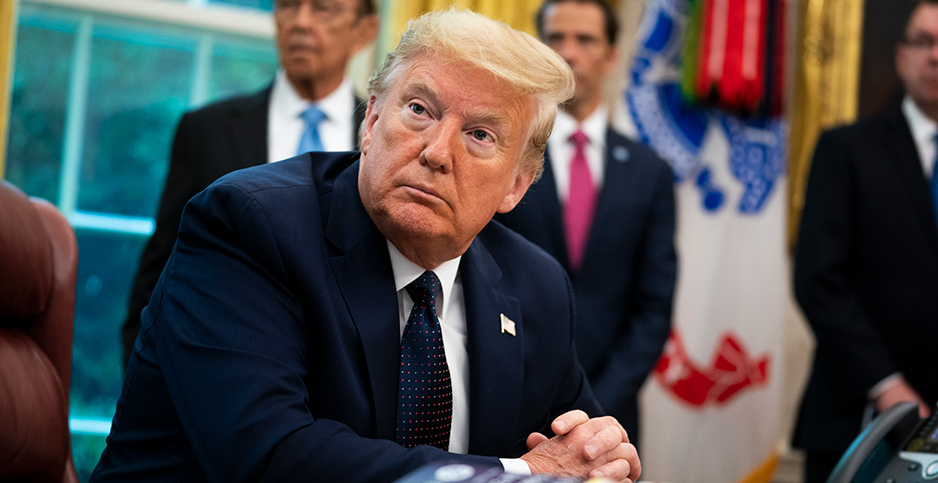 President Trump listens to a briefing on the upcoming hurricane season yesterday in the Oval Office. The briefing followed the recent release of NOAA research that connected stronger storms to climate change. Polaris/Newscom

President Trump’s hurricane briefing in the Oval Office yesterday was led by a federal agency whose researchers revealed weeks earlier that climate change is raising the likelihood that major storms could collide with the United States.

There’s no indication that climate change was included in the briefing by acting NOAA Administrator Neil Jacobs. That went against the advice of former Vice President Al Gore, who said climate risks should be part of the technical presentation on hurricanes.

"Today’s briefing is a chance for the President to listen & protect us," Gore wrote on Twitter before Trump’s briefing. "Will the president ask why the oceans are the warmest ever measured? And why that makes hurricanes stronger? And why the strongest are more numerous?"

Instead, Trump joked that the country did not need a difficult hurricane season on top of the coronavirus pandemic.

Gaynor said FEMA has $80 billion for disaster response, including about $40 billion from Congress for COVID-19.

Trump also complained that "a lot of money went to Puerto Rico," which was devastated by Hurricane Maria in 2017. More than 3,000 people died because of the storm, and some parts of Puerto Rico, a U.S. territory, were without power for up to a year.

Trump has rejected the death count in Puerto Rico, and his administration has been accused of delaying funding for help with the recovery.

Last week, NOAA announced that the upcoming hurricane season would be active, with a 60% chance of being "above normal." NOAA officials predict three to six major hurricanes with winds of 111 mph. Hurricane season begins June 1 and ends Nov. 30.

Yesterday’s briefing came weeks after NOAA researchers released a study that concluded hurricanes were worsening as a result of human-caused climate change.

Looking at data for the last 40 years, researchers found that the likelihood of a hurricane developing into a major storm — a Category 3 or higher — increased by about 8% per decade, according to the study published in the Proceedings of the National Academy of Sciences.

"While a hurricane is out there, the chances of it having major hurricane intensity is increasing," said James Kossin, a NOAA researcher and lead author of the study.

While hurricane briefings in the Oval Office tend to focus on preparation for the upcoming season, it’s also important that political leaders understand long-term climate trends, he said.

During the Obama administration, Kossin said science adviser John Holdren would frequently contact the agency to discuss the latest climate research. Often, that information would end up in a speech by the president as he explained climate risks to the public. That hasn’t happened during the Trump administration, he said.

Information about the effects of climate change on hurricanes can help communities plan for intensifying storms, Kossin said. It can be particularly beneficial for municipal governments, the real estate industry and construction companies in coastal areas.

"Those longer-term questions are really where our signal starts to play a fundamental role in what you might expect," he said.

Last year, Trump was accused of politicizing NOAA storm predictions after he incorrectly asserted that Alabama was threatened by Hurricane Dorian.

The controversy, referred to by some as "Sharpie-gate," happened after Trump displayed a hurricane map in the Oval Office with a storm track that had been altered with a marker.

The only known scientist to have briefed Trump on climate change is William Happer, an emeritus professor of physics at Princeton University and a former senior director on the National Security Council.

Happer, who says that rising levels of CO2 are beneficial to the planet and people, has also said there is no link between hurricanes and climate change.