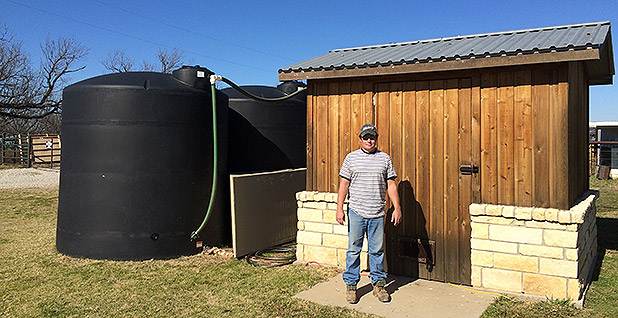 Texas oil and gas inspectors say they still don’t know what caused a water well to blow up in 2014, badly burning a man and his daughter.

But experts hired by attorneys for Cody Murray and his family have laid out in court documents a case of complete neglect by a company that drilled an oil and gas well nearby.

In a series of reports, the experts say the company that drilled it, Fairway Resources LLC, knew it was poorly sealed, allowing gas and even drilling mud to leak into the neighborhood water supply.

The reports also fault the analysis of state regulators who say testing was "inconclusive" on the source of the gas. They say officials failed to account for chemical changes that occur as production changes and the gas moves through the subsurface and into groundwater.

"The evidence in this case is compelling and clear. Fairway cut corners when constructing a well, and it caused the contamination of my clients’ water wells, and the explosion that severely burned my clients," said Chris Hamilton, the Murrays’ Dallas-based attorney.

The state agency that regulates oil and gas is the Texas Railroad Commission. Spokeswoman Ramona Nye said the agency is not familiar with the findings of Murray’s experts. The agency has not determined a cause for the blast.

"The Railroad Commission is investigating whether area oil and gas operations may have impacted water conditions," Nye said. "Our staff has not received reports regarding the fire’s cause."

One of the three statewide elected commissioners who oversee the agency last year declined to comment on the case (E&E News PM, June 3, 2016).

Fairway Resources Chairman Lester Stephens declined to comment because the matter is in litigation.

The flash fire occurred in August 2014 near Perrin, Texas, a rural community about an hour outside Fort Worth. Murray went to his shed to check on a malfunctioning water well pump. When he opened the door, a methane cloud in the air ignited.

He suffered second- and third-degree burns on 22 percent of his body. His 4-year-old daughter, Alyssa, was in the yard in her mother’s arms and was also burned. So was his father, Jim, who’d been standing behind him.

Before the fire, Murray’s neighbor Richard Singleton had complained to the Railroad Commission about fouled water in his well. But inspectors had repeatedly told him the problem couldn’t be oil and gas.

Murray and Singleton sued Fairway and another company, EOG Resources Inc., which has settled. The suit names several Fairway entities, including one that is a wholly owned subsidiary of the investment firm Goldman Sachs. Trial is set for Oct. 12.

Ingraffea is well-known to oil and gas industry trade groups, who have long criticized him as being in league with environmentalists and opponents of drilling. His fee was donated to PSE Healthy Energy Inc., a research group that studies the effects of drilling.

Ingraffea said Fairway’s well construction was "bare-bones." The company failed to install a device, called a Bradenhead gauge, that would monitor pressure in the wellbore and help detect leaks. It was designed with a minimal cement seal at the bottom of the well. But it was actually constructed with even less.

He noted that other wells in the area had much more extensive cement seals.

"This well was designed and constructed in such a careless fashion," Ingraffea wrote, "that the risk of these mechanisms [leaks] occurring, always present in wells of this type, was intensified."

Darrah compared water from neighborhood wells with the natural gas from the Fairway well using sophisticated noble gas analysis and determined that they match.

"The JT Cook #2 oil and gas well displays a geochemical match to samples of groundwater in the Singleton’s and Murray’s water wells in all of the measured data," Darrah wrote.

Schwartz said Texas Railroad Commission officials assumed that any gas leaking from a gas well into a water supply would match the gas coming out of the wellhead. He said that fails to account for changes that would occur in the gas as it rises to the aquifer.

"This assumption is wrong because it ignores the fact that the composition of free gases moving in the subsurface and gases dissolved in groundwater are not static but change as a consequence of physical, chemical and isotopic processes," Schwartz wrote.

Hildebrand said he matched sludge found in Murray’s and Singleton’s water wells to a byproduct of a drilling mud additive called Chem Seal used in the Fairway well.