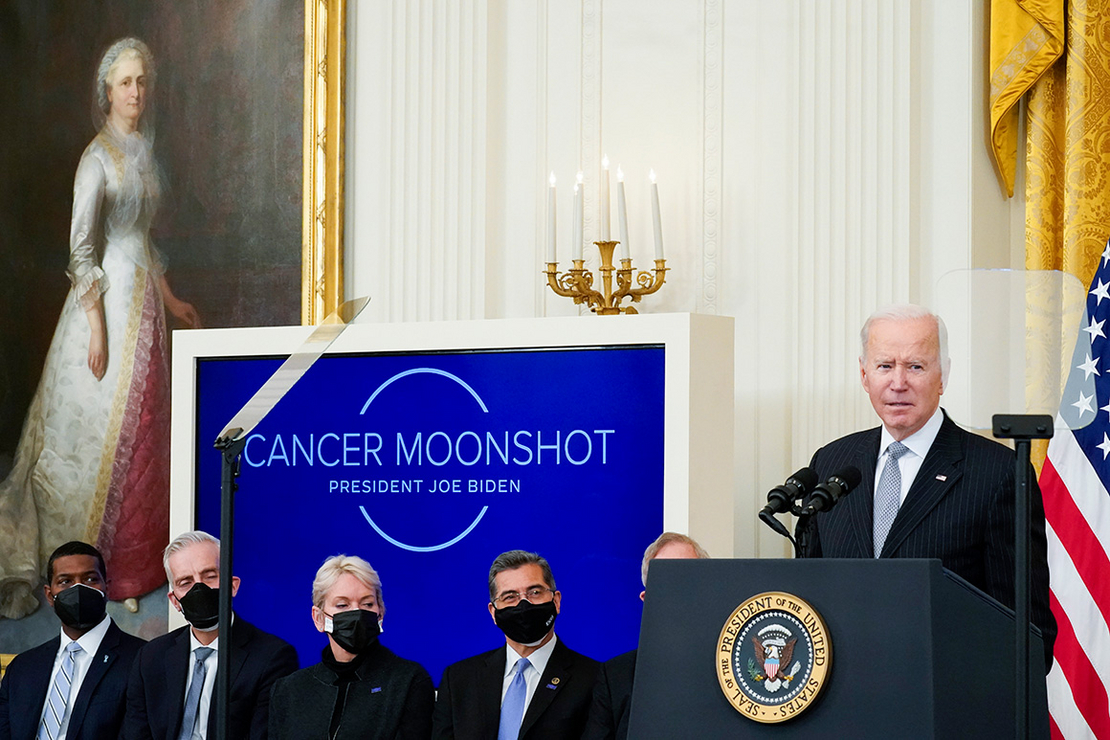 President Joe Biden speaking during a "Cancer Moonshot" event in the East Room of the White House on Feb. 2. AP Photo/Alex Brandon

Cancer researchers and the federal government need to spend more time and money on reducing exposures to toxic chemicals if the Biden administration is going to reach goals laid out in the “Cancer Moonshot” program, researchers and environmental health advocates said today.

“In order for systemic changes to happen, we must prevent exposures to chemicals, of which many are known carcinogens,” said Nsedu Obot Witherspoon, executive director of the Children’s Environmental Health Network.

Her remarks came during one of a series of virtual roundtable-style discussions today held by members of the newly created “Cancer Cabinet,” tasked with reducing the national death rate from cancer by at least 50 percent over the next 25 years (Greenwire, Feb. 3).

Witherspoon’s panel was hosted by the Centers for Disease Control and Prevention’s National Center for Environmental Health and Agency for Toxic Substances and Disease Registry Director Patrick Breysse and focused specifically on “perspectives on cancer and the environment.” Other panels focused on topics like clinical trials, cancer and the military, and engaging patients and communities on tobacco.

Experts on the environment panel overwhelmingly agreed that the community of cancer researchers and advocates —including within the federal government — needs to spend more time looking at how to prevent cancer, which would likely involve reducing exposure to carcinogenic chemicals.

“We need a national commitment on cancer prevention,” said Margaret Kripke, a professor at the University of Texas’ MD Anderson Cancer Center. “Cancer research has been so focused on the cure for decades that we have forgotten the potential of prevention to improve not only the survival rates but also to reduce the physical and psychological burden associated with a cancer diagnosis.”

Trevor Schaefer, who founded the Trevor’s Trek Foundation, agreed, noting that as a survivor of childhood cancer, “I’m considered one of the success stories,” despite still suffering from impaired hearing and vision and possibly never being able to have biological children.

“So it is very important that we focus on prevention, because even if a child is cured, they will endure horrific battles for the rest of their life,” he said.

Preventing exposure to toxic chemicals is often easier said than done, the panel agreed. Kripke noted that often, the research that exists on chemicals’ health effects does not reflect real-world conditions.

For example, animal tests of chemicals are often conducted on adult specimens, and chemicals are frequently tested one at a time. Often, such tests look at acute impacts of chemical exposures, not long-term effects over a lifetime, while humans are exposed to a mixture of chemicals throughout their lives, and exposures during childhood may not affect a person’s health until decades later.

Additionally, while exposure to chemicals can cause cancer, people also may have genetic predispositions to cancer, and there is more research needed on how carcinogenic chemicals may compound that genetic risk.

Xiao-Cheng Wu, director of the Louisiana Tumor Registry at the Louisiana State University School of Public Health, said existing data sets that researchers use to track cancer also do not include information on environmental exposures, making it difficult to make connections between cause and effect.

Still, she said, a lack of data should not preclude action.

“If toxic air pollutants are higher than national standards, the impact on residents’ health needs to be evaluated thoroughly, and not just when cancer data proves there is an elevated risk,” she said.

Washington State Department of Health Secretary Umair Shah agreed. He recalled his time working as a doctor in Texas earlier in his career, when “we providers would wonder what we could have done to prevent this person from having cancer in the first place.”

“We often had patients with environmental concerns that were likely the link or cause of their cancer,” he said.

All panelists agreed that more federal funding is needed for cancer prevention research, alongside stricter environmental regulations for carcinogens. In the meantime, Shah said, advocates and researchers need to improve how they communicate cancer risk to vulnerable communities and the nation at large.

Witherspoon also noted that many in the cancer research community often consider cancer prevention to involve changes to individual habits. While those may be helpful, she said, there needs to be recognition that environmental pollution — and environmental racism — are systemic problems that still harm individuals who are trying to do everything right.

“The definition of prevention should be clear,” she said. “At times, in cancer communication, prevention is defined as activities — getting more sleep, changing our diets, not smoking, etc. — but even people who have healthy lifestyles are still getting cancer diagnoses.”

She said advocates need to be “laser clear” that prevention includes regulation of chemicals.

“We need to build a regulatory structure that frees all people from the burden of toxic exposures and cancer risks,” she said. “These are big, heavy systems but we need to call out the elephant in the room.”