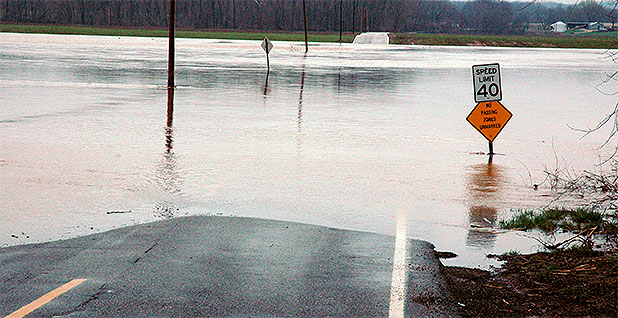 Experts on flooding are concerned President Trump might roll back an Obama-era order requiring public infrastructure to be built to withstand rising sea levels and heavier downpours.

The potential move comes as the administration is proposing a $1 trillion build-out of roads, bridges and other infrastructure over 10 years. Combined with the termination of the federal flood risk management standard, signed by former President Obama in 2015, the construction boom could result in new roads that are susceptible to flood damage and taxpayer losses, some experts say.

Eli Lehrer, president of the libertarian R Street Institute and an expert on flood policy, said that repealing the standard could also expand residential development in floodplains by encouraging the construction of roads and other services in disaster-prone areas.

"This will inevitably expand the need for disaster aid, both to rebuild federal facilities likely to be destroyed, and to help people who would be lured into harm’s way by dumb decisions by central planners," Lehrer said of repealing the Obama order.

Obama’s flood standard, enshrined in Executive Order 13690, was praised by floodplain managers and policy experts when it was released two years ago for requiring federal agencies to ensure that public infrastructure — from subsidized housing to water treatment plants — is built at least 2 feet above the 100-year flood standard. For critical infrastructure, like hospitals and fire departments, it ordered a 3-foot bump in elevation.

The order had a dramatic backdrop: It came as the East Coast was still grappling with the effects of Superstorm Sandy, which caused more than $50 billion in damages in 2012. Seven years earlier, Hurricane Katrina cost more than twice that much. Taxpayers paid billions to rebuild roads, sewers, bridges and other public facilities.

At the same time, thunderstorms are causing more damage, in part because of expanded development and, potentially, more muscular downpours associated with rising temperatures. These convective storms, which can spawn hail, twisters, wind and floods, are producing seven times as many losses on average as they did in the 1980s, according to the Insurance Information Institute.

Plans to rescind the flood standard were listed on a draft executive order first obtained by Politico last week outlining the broad dismantlement of Obama’s climate change policies. It remains unclear if Trump will follow through. The White House declined yesterday to confirm news reports that the standard is being targeted, or when the order will be unveiled.

Meanwhile, those who worry about the flood standards say the idea that Trump could roll them back reveals a disconnect with observable events.

In Norfolk, Va., home to the nation’s largest naval station, which Trump visited earlier this month, streets often flood on sunny days. Sea levels have risen 18 inches there over the past 100 years, causing local infrastructure to be swamped during some high tides.

"That’s not pie-in-the-sky stuff. That’s something these coastal communities are living with every high tide," said Larry Larson, senior policy adviser to the Association of State Floodplain Managers, referring to rising sea levels.

Lehrer, whose think tank is in touch with administration officials, said he believes the Obama flood standard is threatened by repeal. He suggests that it could stem from a misunderstanding about its role in development.

"There is simply no case for the government to subsidize stupid things," Lehrer said. "So if President Trump is committed to fiscal responsibility, he really needs to take a close look at this. This will not result in smaller government."

Trump’s potential action on flooding steers him into a thorny thicket. For about 40 years, city planners, developers and governments of all sizes have used the 100-year flood as a guide for where and how high things should be built.

But this "magic line," as some professionals call it, doesn’t predict the impacts of flooding that well. Forty percent of all damage from inundation occurs outside the 100-year flood line, according to the floodplain managers association.

In reality, the 100-year standard is "insufficient," said Rob Moore, a senior policy analyst with the Natural Resources Defense Council. President Carter pushed federal agencies, in 1977, to use it when planning public infrastructure. It’s been the basis for construction ever since — until Obama bumped up the elevations by 2 to 3 feet.

Eliminating Obama’s order could mean that water plants, roads and other high-ticket infrastructure facilities are built back to their original design after being damaged in a storm, Moore said.

"We’re gonna sink a ton of money into this thing; let’s build it better," he said, describing the role of Obama’s order. "Now that’s not gonna happen, more than likely."

Obama’s flood standard is not fully operative. Three agencies have proposed regulations that would enforce it — U.S. EPA, the Department of Housing and Urban Development and the Federal Emergency Management Agency. But none of the regulations are finalized.