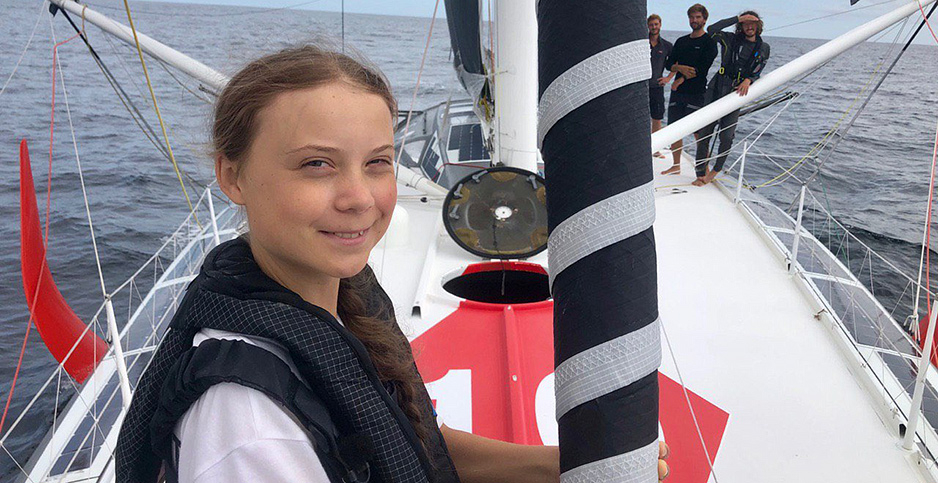 Swedish climate activist Greta Thunberg nearing New York after crossing the Atlantic Ocean on a zero-emissions sailboat. She is participating in the "flight shame" movement. @GretaThunberg/Twitter

A movement sweeping across Europe that encourages people to fly less to fight climate change is dividing clean transportation experts.

Several celebrities, including 16-year-old Swedish climate activist Greta Thunberg, have embraced flygskam — which translates from Swedish to "flight shame." Instead of taking a plane, Thunberg traveled to New York for a U.N. climate summit via a zero-emissions sailboat (Climatewire, July 30).

But some experts who study clean transportation policy say shaming people is the wrong approach, noting that it can fuel ad hominem attacks on social media. Others, though, say the movement has brought much-needed attention to an important strategy for curbing global emissions.

The debate is playing out as airplanes remain one of the most carbon-intensive forms of travel. A round-trip flight from Washington, D.C., to San Francisco produces around 0.9 metric ton of carbon dioxide. That’s equivalent to one-fifth of the greenhouse gases that the average American car produces in a year.

Gilliam is part of a camp that favors talking over shaming. She believes the best way of highlighting the climate impact of air travel is through spreading information and fostering a discussion.

"It’s better to create a conversation about it and a space where people can learn from each other about the different modes of transportation, rather than to bash people over the head," Gilliam said.

Katharine Hayhoe, an atmospheric scientist at Texas Tech University, shares this approach. Hayhoe, who has nearly 117,000 Twitter followers, was recently subjected to vitriolic online attacks after tweeting about her upcoming flight to Alberta, Canada. Many of the attacks came from environmentalists who support the flight shame movement.

"There’s certainly room for improvement if people are flying around the world at a whim, with no regard whatsoever for their carbon footprint," Hayhoe said in an interview. "But the phenomenon that I have observed personally is that whenever I say something on social media about traveling or flying or eating meat, I am attacked. People call me a hypocrite or ask why I didn’t take the train."

The personal attacks persist despite the fact that Hayhoe said she makes a concerted effort to limit her air travel. She tries to give as many virtual talks as possible. And when she does travel for a speaking engagement, she tries to squeeze in at least two or three other talks or meetings in the same location.

For Hayhoe, the attacks are especially frustrating because they center on her individual actions, even though large corporations are historically responsible for the bulk of global greenhouse gas emissions.

"Unfortunately, the reality is that the vast majority of heat-trapping carbon emissions come from large corporations and large entities," she said. "Even if every individual in the world did something to cut their carbon footprint, that wouldn’t solve the problem."

In the opposite camp is Dan Rutherford, a program director at the International Council on Clean Transportation. When he first began working on clean aviation around 11 years ago, Rutherford found few people paying attention to the issue. Now, he said, the movement is bringing much-needed visibility to the problem.

Rutherford noted that while air travel accounts for roughly 2.5% of global greenhouse gas emissions, that percentage is poised to shoot up in the coming decades as flying becomes more accessible. Airline passenger numbers are projected to double by 2037, according to the International Air Transport Association.

Ultimately, the flight shame movement has had trouble catching on in the United States despite its popularity in Europe.

In Sweden, where the movement originated, air travel dropped 3.8% in the first half of 2019. Rail travel also rose one-third this summer as Swedish youth launched a related movement known as tagskryt, which translates to "train bragging," or boasts about taking trains instead of planes.

But in the United States, few people have heard of the flight shame movement, much less participated in it. And air travel rose 3.9% in the first five months of 2019 compared with the same period last year, according to an E&E News review of federal figures compiled by the Bureau of Transportation Statistics.

Andrew Scott, head of the climate and energy program at the Overseas Development Institute, said flight shame will continue to have a limited impact unless more American "frequent fliers" decide to join. A small subset of Americans — 12% — fly on average 14 times a year and are responsible for two-thirds of the country’s plane emissions.

Scott also predicted that the anti-flying campaign would take time to achieve a meaningful impact, similar to the anti-smoking campaign several decades ago.

"I’m not sure shaming is going to work until flying becomes socially unacceptable," he said. "It’s a bit like smoking, where 30 years ago, smoking was an acceptable social behavior. These days, it’s not. And it takes time for people’s attitudes to change."