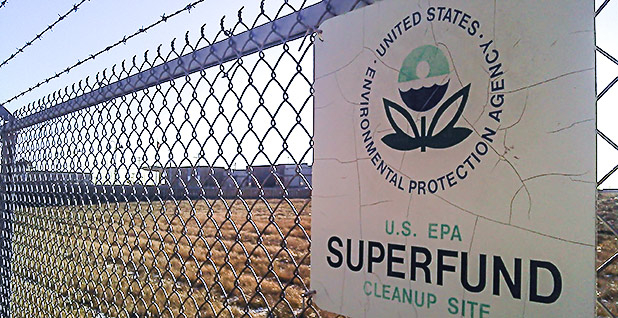 A Trump administration plan to zero out U.S. EPA funding that goes to the Justice Department for litigating Superfund cases puzzled many experts in environmental policy.

The New York Times reported yesterday evening that the EPA budget proposal would end reimbursements to DOJ’s Environment and Natural Resources Division for handling lawsuits against parties over cleanup costs for contaminated sites.

"This is a crazy stupid idea," a former senior official said.

The official pointed out that DOJ’s legal efforts on Superfund bring in significant amounts of money from corporate polluters for EPA. It has historically been a big benefit to the agency’s budget.

"Not spending this money is penny-wise and pound-foolish and will cost the government probably billions over time," he said.

EPA has paid the Justice Department about $20 million a year in reimbursements for handling Superfund litigation — enough to cover 115 full-time employees, the Times reported. According to a recent report by DOJ’s inspector general, the arrangement has brought in $810 million to DOJ’s environment division between 1987 and 2016, or nearly 30 percent of its budget.

But the EPA budget proposal released by the White House this spring indicated that the agency plans to stop reimbursing DOJ for litigation costs.

There is some conflict between EPA and DOJ on the issue. The Justice Department’s budget included the expectation that it would receive nearly $26 million from EPA in reimbursements.

Justin Savage, an attorney at Sidley Austin LLP and a former attorney in DOJ’s Environmental Enforcement Section, said it’s "appropriate and common" for a new administration to look at ways to enforce environmental laws more efficiently.

"The question the administration will consider is whether this funding delivers such that it makes sense to continue," he said. "And as part of that analysis, issues would include for the amount of money spent at DOJ, how much is recovered?

"My sense is that for every dollar spent at DOJ, several more are returned to the Superfund," he said.

According to EPA’s website, the agency in 2016 obtained $1 billion in commitments from potentially responsible parties for Superfund site cleanups. It billed parties for about $91.8 million in oversight costs associated with cleaning up sites.

In the past 35 years, EPA has secured more than $35 billion from potentially responsible parties for Superfund cleanups.

Justin Pidot, a law professor at the University of Denver’s Sturm College of Law and a former DOJ environmental attorney, said zeroing out EPA’s reimbursements for DOJ would cut the legs out from under the Superfund program.

"This seems so absurd to me, because this is one of the places that DOJ is bringing in money for legal fees, specifically for legal fees. Those monies go to EPA, and EPA reimburses DOJ for those costs," he said.

"It seems like a strange place to make such deep cuts even for an administration that is hellbent on undermining environmental law."

Environmentalists also slammed the Trump administration for issuing the proposal as Pruitt has pledged to make cleaning up Superfund sites a priority. In a May 22 memo, the agency chief announced he would restore the program to its "rightful place at the center of the agency’s core mission."

"It makes no sense for Administrator Pruitt to claim he’s going to ‘prioritize’ and enhance EPA’s Superfund program, while simultaneously slashing the funding to execute the program," said Eric Schaeffer, executive director of the Environmental Integrity Project, who previously led EPA’s Office of Civil Enforcement.

NRDC’s Slesinger, who worked on Superfund as an aide to the late Sen. Frank Lautenberg (D-N.J.), said the reimbursement mechanism has historically been noncontroversial. Reimbursements from EPA mean federal dollars can go to things other than "subsidizing corporate polluters," he said.

"The only logical reason to do this is that you don’t want polluters to pay for the Superfund," he said.

According to the Times, over the last several months, the Environment and Natural Resources Division has explored alternative funding mechanisms, including using a fund that takes money from civil debt collection litigation. A DOJ spokesman declined to comment this morning.

But Pidot said the proposal could more broadly hamper environmental enforcement at the Justice Department. Almost all the reimbursement money goes toward the enforcement section at ENRD.

"It certainly is a significant component of the enforcement budget that ENRD has, so if that money were to go away, if it really were facing that kind of a budget cut, I think it would absolutely have a pretty dramatic effect," he said. "I don’t know how Justice would handle that."

Trump administration officials don’t plan to make a final decision until Congress passes an appropriations bill for the fiscal year that begins next month. Whether Congress would do anything to stop Pruitt from going ahead with the proposed cut is unclear.

Rep. Tom Cole (R-Okla.), who is on the House Appropriations subcommittee that controls EPA’s budget, this morning would not weigh in specifically on the proposal but said prosecuting Superfund cases is a "legitimate function" of the federal government.

"I certainly don’t any have problem about prosecuting Superfund cases. I think that’s a good thing to do," he said. "I don’t think businesses should be allowed to sort of socialize their costs by sticking them on the taxpayer."

He acknowledged Congress has already cut back EPA’s enforcement budget consistently since 2011.

Rep. John Shimkus (R-Ill.), chairman of the Energy and Commerce panel’s Subcommittee on Environment, signaled today that he would have no problem if some money marked for Superfund litigation were cut back in favor of more spending on environmental cleanup work.