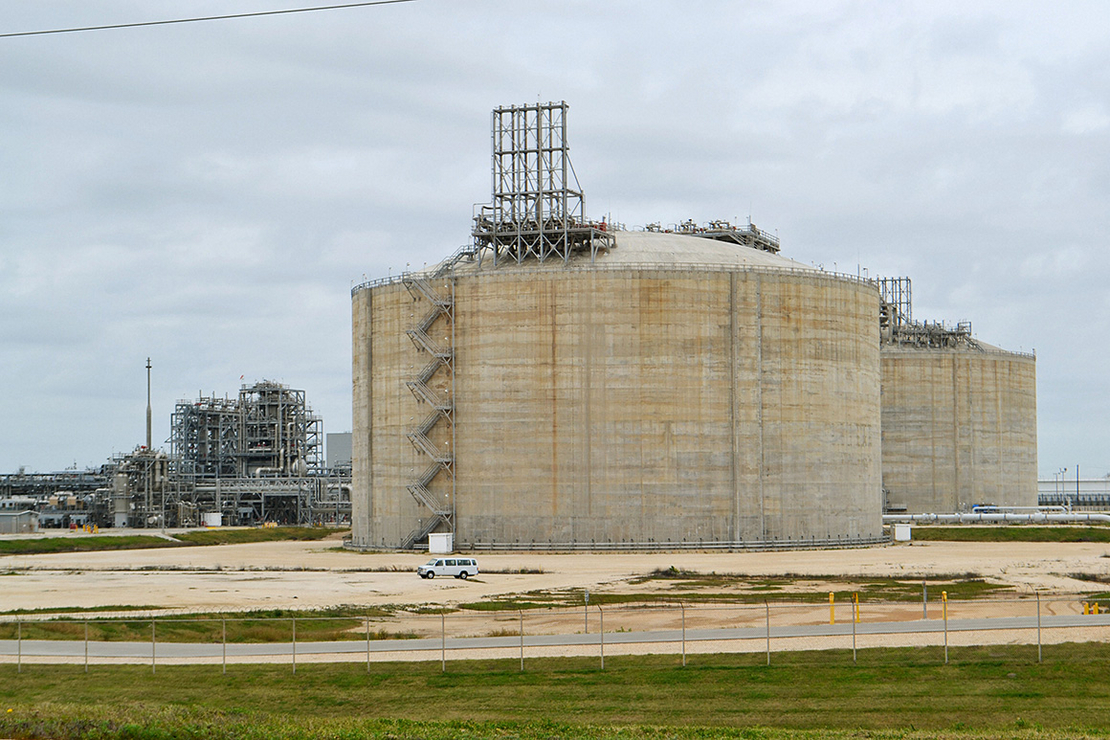 A shipping base for liquefied natural gas in Freeport, Texas. Kyodo via AP Images

An explosion yesterday at a Texas liquefied natural gas terminal will shut the facility for at least three weeks, disrupting international gas supply chains and prices.

The closure quickly drove down domestic natural gas prices. It takes 2 billion cubic feet of gas a day off of the international market as LNG plants operate at peak capacity to replace Russian supply in Europe.

There were no injuries at the Freeport LNG terminal less than 70 miles from Houston, but a nearby beach was evacuated and ship traffic was restricted in the area for hours. Late in the day, company spokesperson Heather Browne announced in a statement that, as a result of the fire, “Freeport LNG’s liquefaction facility is currently shut down and will remain shut down for a minimum of three weeks.”

Henry Hub natural gas futures fell by 6 percent yesterday compared to the previous day on fears of a prolonged outage, said Ruth Liao, LNG editor of the Americas for ICIS, a price-reporting agency.

“If Freeport LNG is suddenly not taking [2 billion cubic feet a day] of gas, then the traders are worried that the gas is suddenly dumped back to the market,” Liao said. “The abrupt disruption from the plant, the uncertainty of how long this outage could last and the knee-jerk reaction of traders reflected that drop.”

Freeport LNG officials said the cause of the explosion is under investigation.

“There were no injuries, all employees and contractors have been accounted for and there is no risk to the surrounding community,” Browne said.

Environmentalists and local opponents who fought the plant for years said the explosion is a stark demonstration of the dangers of the terminal and the hazards of fossil fuels.

“This is terrifying. We’ve been afraid of a disaster happening ever since Freeport LNG started exporting gas,” said Melanie Oldham of Freeport, Texas, who fought the construction of the facility and founded Citizens for Clean Air and Clean Water in Brazoria County.

A release from local environmental groups included descriptions of the explosions from activists in the area. One said she saw it blow up while she was at work, calling it the “biggest fireball I’ve ever seen.” Another described three explosions, followed by helicopters and emergency vehicles heading to the plant.

Industry officials said LNG terminals operate under stringent safety and environmental standards and the industry has a great safety record.

“The U.S. LNG industry is world-class in its safety measures and invests millions annually in state of the art equipment and safety practices,” said Daphne Magnuson, spokesperson for the Center for Liquefied Natural Gas. “Safety guides the entire LNG process from construction of a facility to the liquefaction process itself, as well as plant security, loading, unloading and transportation.”

Freeport LNG, a privately held company, has been the subject of 11 PHMSA enforcement actions since the beginning of 2015, agency records show.

PHMSA sought a $2.2 million fine against another Gulf Coast LNG operator, Cheniere Energy Inc., after a leak from two storage tanks at its Sabine Pass facility in Louisiana in 2018 (Energywire, Aug. 10, 2021). The tanks have been closed for the four years since, but the Federal Energy Regulatory Commission yesterday authorized the company to begin “cooldown” of one of the tanks, a step toward putting it back in operation.