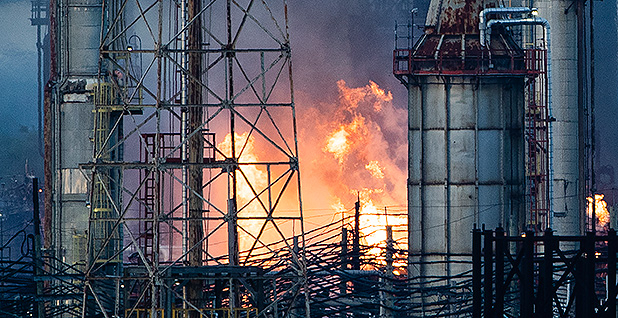 Explosions that tore through a Philadelphia refinery on Friday could further cloud the future of one of the nation’s oldest oil processing plants.

The Philadelphia Energy Solutions refinery has struggled financially for years, and it was already facing a series of challenges in the near future. The explosion Friday — the second fire at the site in less than two weeks — is likely to ramp up pressure from politicians and neighborhood activists who have been complaining about air pollution and historic soil and water contamination at the site.

"We really think the refinery should have to stop operating," said Jo CordonHill, an organizer with the neighborhood environmental group Philly Thrive, which was formed to block any expansion of the refinery.

The refining complex is Philadelphia’s biggest source of air pollution, according to a report from the University of Pennsylvania’s Kleinman Center for Energy Policy.

The 1,300-acre site is contaminated with lead, gasoline, benzene, toluene and other pollutants. And it’s saddled with outdated technology that prevents it from refining cheaper grades of oil, the report said.

"On top of this, the facility falls short on reliability, operating with a lot of costly down time," the report said.

There have been oil operations at the Schuylkill River tract since 1866, when oil was used mostly to produce kerosene for home lighting. The complex, which consists of two refineries, was eventually acquired by Sun Oil Co., later renamed Sunoco LP, an old-name Pennsylvania company that was founded in 1886.

With a combined capacity of about 350,000 barrels a day, the plant is the biggest oil refiner on the East Coast.

In 1975, eight firefighters died while battling a fire at the refinery, the Philadelphia Inquirer reported in 2015.

By the early 2000s, the refining business was struggling, and Sunoco was looking to shut down its refineries and concentrate on its pipeline business.

The Philadelphia complex found a lifeline in the Carlyle Group, a venture capital company, which formed Philadelphia Energy Solutions, a partnership that bought the operation in 2012. Meanwhile, Sunoco merged its pipeline operations with Energy Transfer Partners LP, the Dallas-based oil and gas transportation company.

Philadelphia Energy Solutions went bankrupt in 2018. The company blamed the federal government’s renewable fuels standard for some of its trouble. Reuters reported, though, that the company’s owners had contributed to its demise by withdrawing $590 million over the years in fees and other payments.

The Kleinman report warned that the company is still burdened with debt and could face another round of bankruptcy in 2022 when its loans mature.

The refinery is also threatened by an ongoing drop in demand for gasoline and other fuels.

While the explosion is likely to cause a short-term price increase for gasoline in New York and other East Coast markets, there’s plenty of refining capacity to serve those areas, even if Philadelphia Energy Solutions were to shut down for a significant amount of time, Wood Mackenzie analysts John Coleman and Marc Amons said in an interview Friday.

"Our view would be, there’s enough supply to meet the demand if you were to lose production," Coleman said.

The explosion Friday happened in a propane tank at an alkylation unit, which processes regular gasoline into higher grades. No serious injuries were reported, although four workers were treated at the scene.

The fire continued to burn Saturday, and the refinery’s output was curtailed, company spokeswoman Cherice Corley said in an email. Corley didn’t respond to an email seeking comment about PES’s finances or environmental issues.

So far, city and state environmental regulators say they haven’t detected any signs of airborne contamination.

The incident will be investigated by the U.S. Chemical Safety Board, the Occupational Safety and Health Administration, the Philadelphia fire marshal’s office and other organizations, according to the city website.

But activists had already been picketing outside the refinery after the June 10 fire. CordonHill said Philly Thrive and other groups believe they may have some leverage over the plant’s future, since its five-year emissions permit under Title V of the Clean Air Act is set to expire this summer.

A Philadelphia City Council member called for the plant to be closed until its safety can be assured, according to local television station NBC 10.

Mayor Jim Kenney said, "My initial reaction was, ‘Damn, this is bad,’" the station reported.

The permit’s expiration won’t immediately lead to a shutdown, but the renewal process could allow local residents and local politicians a chance to sound off about the problems at the refinery, said David Masur, executive director of PennEnvironment.

"I think the local community, front-line groups, the environmental justice groups — they get understandably more ramped up, as they should," he said. "I think they go … ‘Look, how many of these things do we have to take where communities and families are put at risk?’"