‘Explosive’ Dixie Fire could be worst in Calif. history 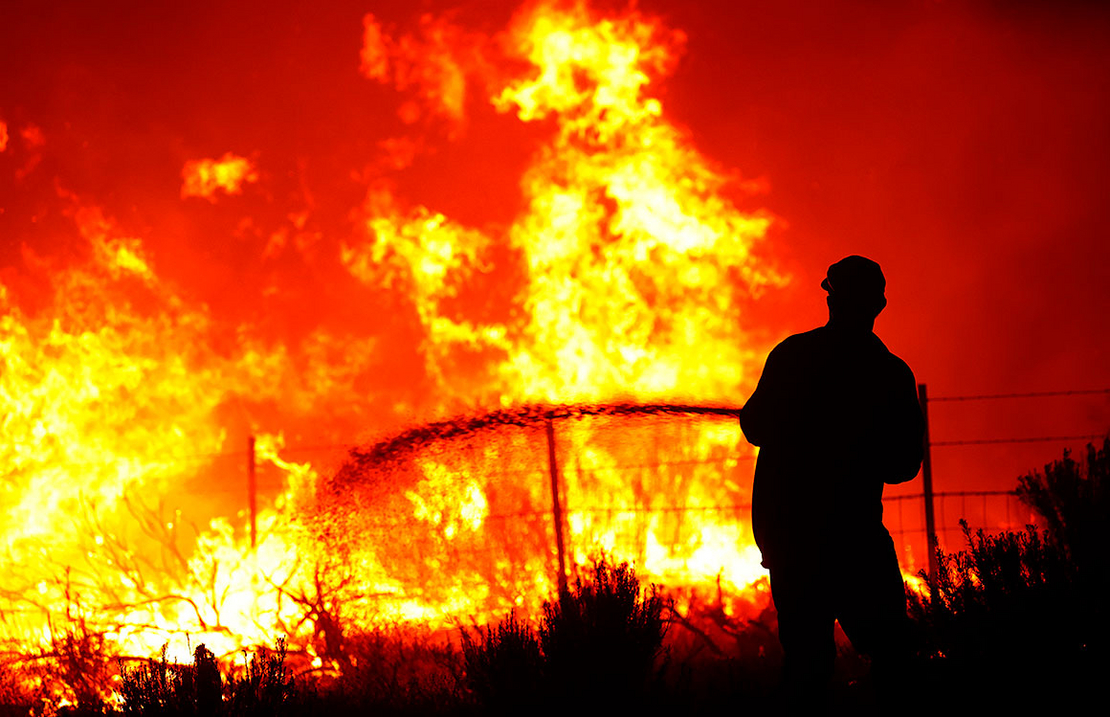 A utility worker attempts to keep the Dixie Fire away from power poles near Janesville, Calif. Justin Sullivan/Getty Images

The Dixie Fire is headed toward becoming the biggest blaze in California history as it devours mountainsides of brittle trees and shrubs caused by a yearslong drought and record heat.

Firefighters have been battling the wildfire in the Sierra Nevada since mid-July. It has burned more than 927,000 acres, and 41% of it is still blazing uncontrollably.

Mike Yeun, a spokesman for the California Department of Forestry and Fire Protection (Cal Fire), acknowledged that the fire could overtake the huge blaze that set state records last year, but he said, "We’re hoping that it doesn’t."

“We’re crossing our fingers," Yeun said from the Dixie command center. "But you know … right now, as of today, it’s 59 percent contained. So we’re confident that 59 percent of the fire is not going to spread, but that means we’ve still got a lot of work to do.”

If Dixie becomes the state’s most destructive fire, it would dethrone the August Complex Fire, which burned more than 1 million acres last year. The two aren’t strictly comparable, because the August Complex merged several fires burning at the same time in the same general area. Dixie is burning in Butte, Tehama, Plumas, Shasta and Lassen counties.

"Last fire season was unprecedented," Yeun said, "and [this year] we saw a lot of the same conditions in some parts of California. Even worse conditions than last year."

That stunned climate scientists, who had predicted that kind of jump in wildfire damage wouldn’t occur for another 30 years or more (Climatewire, Oct. 10, 2020).

Eight of the 10 largest blazes in state history have occurred in the last five years, a fiery rampage seen by many scientists as a clear sign of climate change.

"It’s widely agreed that anthropogenic climate change is the cause of increased temperatures, on average, and more extreme heat waves," said Max Moritz, a wildfire specialist with the University of California Cooperative Extension.

Although there is less certainty about the cause of worsening droughts, he said in an email that "climate change is projected to result in more variable precipitation patterns (i.e., wetter wet periods and drier dry periods)" and "greater heating makes any given drought’s effects on plants that much worse (i.e., more flammable over a longer window of time)."

"So climate change is responsible both directly and probably indirectly," Moritz said. "Then add more ignitions with human development across an increasingly fire-prone environment, and the net result is seeing records being surpassed repeatedly."

The nation’s most populous state has had many droughts throughout history. But "there’s reason to believe that global warming may have made them more severe," said Jon Keeley, a research scientist at the U.S. Geological Survey.

This year’s drought and an earlier drought in 2014 both killed plants that fuel fires, Keeley said. In addition, "we’ve had a phenomena heat wave, and that heat wave is certainly a contributing factor. Because fires basically burn more freely under high temperatures because the high temperatures drive the moisture out of the live fuel, and the dead fuels. And that increases the rapidity at which they will ignite and burn."

"So with all of that and with the wind and access issues, it was just a recipe for disaster," Yeun said. "And it was just explosive fire conditions that we’re experiencing."

Dixie’s size also stems from a failure to cut back dead and dying vegetation, Keeley said.

"We have [roughly] 125 years of management of these forests where we put out natural fires," Keeley said. "And that’s caused an accumulation of fuels."

Some experts suggest that dead vegetation levels in the Sierras are five times higher than they would have been under natural conditions, he said. "And so, put all of those things together, and it’s essentially the perfect storm in terms of fire condition."