Export ambitions down, but not out 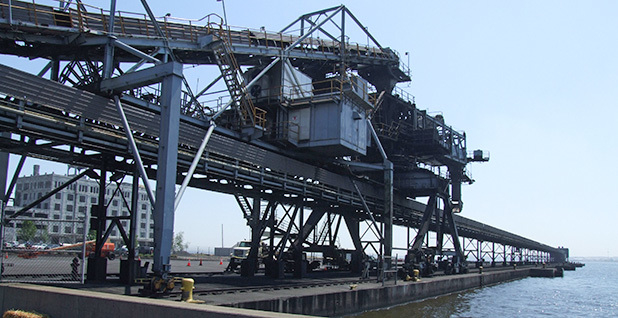 In the span of a few years, coal’s precipitous downturn shredded a web of proposed coal mines, railroad lines and export terminals stretching from the nation’s most productive coal region to the coast of Washington state.

Out of half a dozen Pacific Northwest projects in the works since around 2012, only two bulk export facility proposals remain — the Gateway Pacific Terminal near the Canadian border and the Millennium Bulk Terminals near the mouth of the Columbia River.

The company’s move also affected the associated Tongue River Railroad proposal (E&ENews PM, March 10). Today, the federal Surface Transportation Board dismissed the permit application for the 42 miles of track that would have connected Otter Creek to existing rail lines.

When it comes to Gateway, the Army Corps of Engineers’ environmental review is on hold pending the agency’s decision on whether the joint venture — backed by SSA Marine and Cloud Peak Energy Inc. — impairs Lummi Nation treaty-protected tribal fishing rights (Greenwire, April 4).

Attorneys for the Tongue River Railroad’s joint owners Arch and BNSF Railway Co. pointed to "medium and long term" viability for their projects.

Millennium President and CEO Bill Chapman responded in a Longview, Wash., newspaper op-ed. "What you often hear is the view that some see coal as a risky long-term bet," Chapman wrote in The Daily News. "We’ve taken that bet. We view energy and trade differently."

Chapman said recent "short-term market fluctuations" didn’t affect terminal advocates’ confidence in the long-term viability of their $680 million project, which they point out would bring jobs to a depressed economy.

The U.S. Energy Information Administration reported the first decline in global coal trading in 21 years in 2014. But Chapman pointed to environmentalists’ own worries about an increase in global coal plant construction.

With Arch and majority Millenium shareholder Lighthouse Resources Inc. committed to exports, Chapman told the Associated Press that Peabody’s bankruptcy actually "highlights why we need to open new markets to the U.S. coal industry through exports."

"Chinese thermal coal imports are unlikely to grow for a decade," Roberts said, as the world’s largest coal producer and consumer works "to modernize and rationalize its coal industry."

Stuhlmiller said he was "proud" of terminal proponents in the face of tightening regulations and environmental opposition. "If they don’t keep pushing and get ‘er done now, it’s not going to happen," he said.

Proponents, McHugh said, also cannot explain away the coal market collapse. Export critics like her point out that coal’s woes plus low oil prices have significantly dented the demand for rail.

"I just don’t see how this plays out in any way that works out for them," she said.

"The taxpayers are starting to get smart and realize that these bust-boom industries — like coal and oil and the fossil fuels — are just resulting in communities being worse off after the boom in the bust than they were before," she said.

Dunning’s family has ranched for a century upstream from the proposed Montana coal mine. For decades, ranchers have fought the mine and railroad proposals.

While Arch’s latest iteration is on its last legs, ranchers, tribal activists and other opponents are trying to permanently end mining ambitions in the area east of Billings. Dunning said investing in a single form of energy has repeatedly proved to be a bad idea historically.

He is trying to spread the message in Colstrip, the Montana town where the derailed Tongue River Railroad would have connected to an existing line. The coal-dependent community refuses to give up on the energy resource despite the industry’s recent hard times (ClimateWire, April 12).

"Since we’re so close to having that completed and it would potentially be useful if anything else were going to happen out there, we are going attempt to finish it, but we do have other priorities," Ponozzo said. "It’s not high on our list."

Dunning hopes the designation proves something area ranchers have known all along. "We all knew it was an alluvial valley floor," he said. "We just didn’t see any way they were not going to have an impact on that."