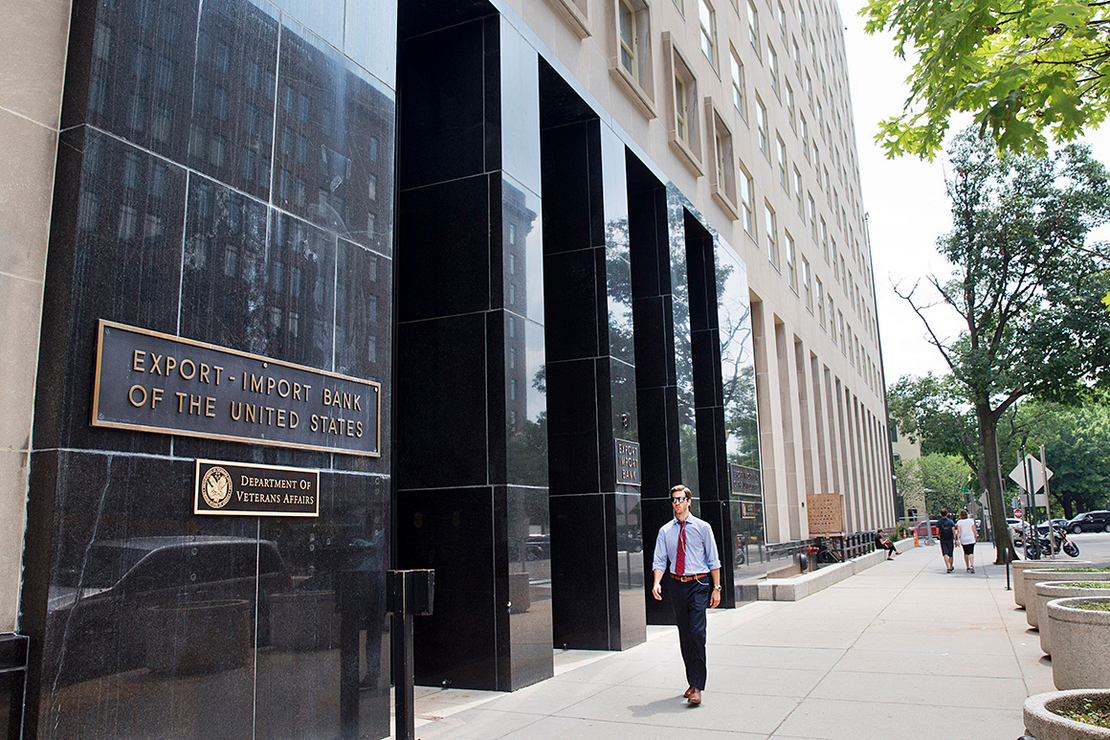 A man walks past the Export-Import Bank of the United States in Washington, D.C. AP Photo/Jacquelyn Martin

The board of the Export–Import Bank of the United States yesterday approved a new tool meant to support domestic export projects, opening financing options to facilities associated with liquefied natural gas, renewables and energy storage.

The initiative will provide access to the agency’s “existing medium- and long-term loans and loan guarantees to American manufacturing projects that export,” according to a statement from the Ex-Im Bank, the nation’s official export credit agency.

The new tool will be available to all sectors, the Ex-Im Bank said, provided that projects meet environmental laws and other requirements.

“The Make More in America Initiative will create new financing opportunities that spur manufacturing in the United States, support American jobs and boost America’s ability to compete with countries like China,” Reta Jo Lewis, the Ex-Im Bank’s president and chair, said in a statement yesterday.

LNG has been in the spotlight in recent weeks as Russia’s invasion of Ukraine disrupts global energy markets. The United States moved to ban oil, LNG and coal imports from Russia. European countries also are seeking to reduce their dependence on Russian energy.

Observers have said Russia’s actions present a business opportunity for the U.S. gas industry. More than a dozen LNG projects have been federally approved but not yet built. That suggests the U.S. industry could roughly double its exports without a major regulatory approval (Energywire, March 9).

The new bank initiative incentivizes applications in “environmentally beneficial, small business and transformational export transactions,” according to the Ex-Im Bank’s statement, which listed energy storage and renewable energy, in addition to semiconductors, biotech and biomedical products.

“U.S. LNG exports are both environmentally beneficial and transformational, two adjectives the release specifically uses to call out projects they would be supporting,” said Charlie Riedl, executive director of the Center for Liquefied Natural Gas, in an email.

In a statement yesterday, Fred Hutchison, president and CEO of LNG Allies, said: “Although U.S. LNG export projects have traditionally been able to secure private sector construction loans (backed by long-term contracts with creditworthy counterparties), today’s action by the Ex-Im Bank’s board could prove beneficial during the current global LNG shortage, which could well last for several more years.”

“Good, solid renewable projects will get EXIM support if they pass the agency’s high lending standards,” Hutchison said in an email. “Gas/LNG projects are subject to the same rules and [regulations].”

Meanwhile, an Ex-Im Bank spokesperson said LNG was not one of the sectors identified in Biden’s executive order on America’s supply chains and “is not one of the EXIM Bank Charter mandated priority areas that shaped the sectors incentivized in the Make More in America Initiative.”

“LNG projects are not within the agency’s official environmentally beneficial exports classification,” the Ex-Im Bank spokesperson said, linking to an agency webpage.

Amid the backdrop of Russia’s war against Ukraine, President Joe Biden has pledged to send more U.S. gas to Europe (Energywire, March 28).

Oil and gas trade associations and companies have supported Biden’s push to help Europe wean itself off Russian energy through more LNG exports. But Global Energy Monitor in a brief this month said new U.S. export terminals “are not a viable solution to Europe’s near-term gas needs.”

“As the world reels from the impact of geopolitical events, like [Russian President Vladimir] Putin’s war of choice, and other supply chain shocks, it is clear that investing in domestic manufacturing is critical for our economic and national security,” said the joint statement.

“This initiative will support the Biden-Harris Administration’s efforts to expand America’s global competitiveness in the industries of the future — from clean energy and clean technology to semiconductor production,” the statement from the pair also said.

To qualify for eligibility, projects broadly would need to have “25 percent of output exported or expected to be exported,” according to the Ex-Im Bank.

In a January letter to the Ex-Im Bank, Hutchison said U.S. LNG project developers are at “a significant disadvantage” compared to projects overseas that are largely developed by big international energy companies and don’t require offtake contracts to get financing.

However, also in January, environmental group Friends of the Earth pushed back on multiple arguments made by LNG Allies, saying, “The science is clear — governments must rapidly wind down — not increase domestic subsidies for — fossil fuel production and use to avoid the worst climate impacts.”

Yesterday, Kate DeAngelis, international finance program manager at Friends of the Earth, said the group is opposed to the Ex-Im Bank’s using the program to finance LNG.

“Such support would contradict President Biden’s Glasgow commitment to end overseas fossil fuel financing by the end of 2022, and would move EXIM in the wrong direction — away from critically needed investment in renewable energy growth,” DeAngelis said in a statement.

DeAngelis said it’s unclear how much the program will aid renewables and energy storage.

“So far EXIM has done very little outreach to the renewables and energy storage industries, so it would require a massive change of direction led by Chair Lewis and a change of mindset by EXIM career staffers,” she said.

The Ex-Im Bank spokesperson emphasized that the agency and “the entire Biden-Harris Administration are deeply committed to financing renewable energy projects that will drive our world towards a cleaner future.”

“That’s why we formed the Chair’s Council on Climate, and it’s why we are incentivizing renewable energy projects in the Make More in America Initiative,” the spokesperson said.